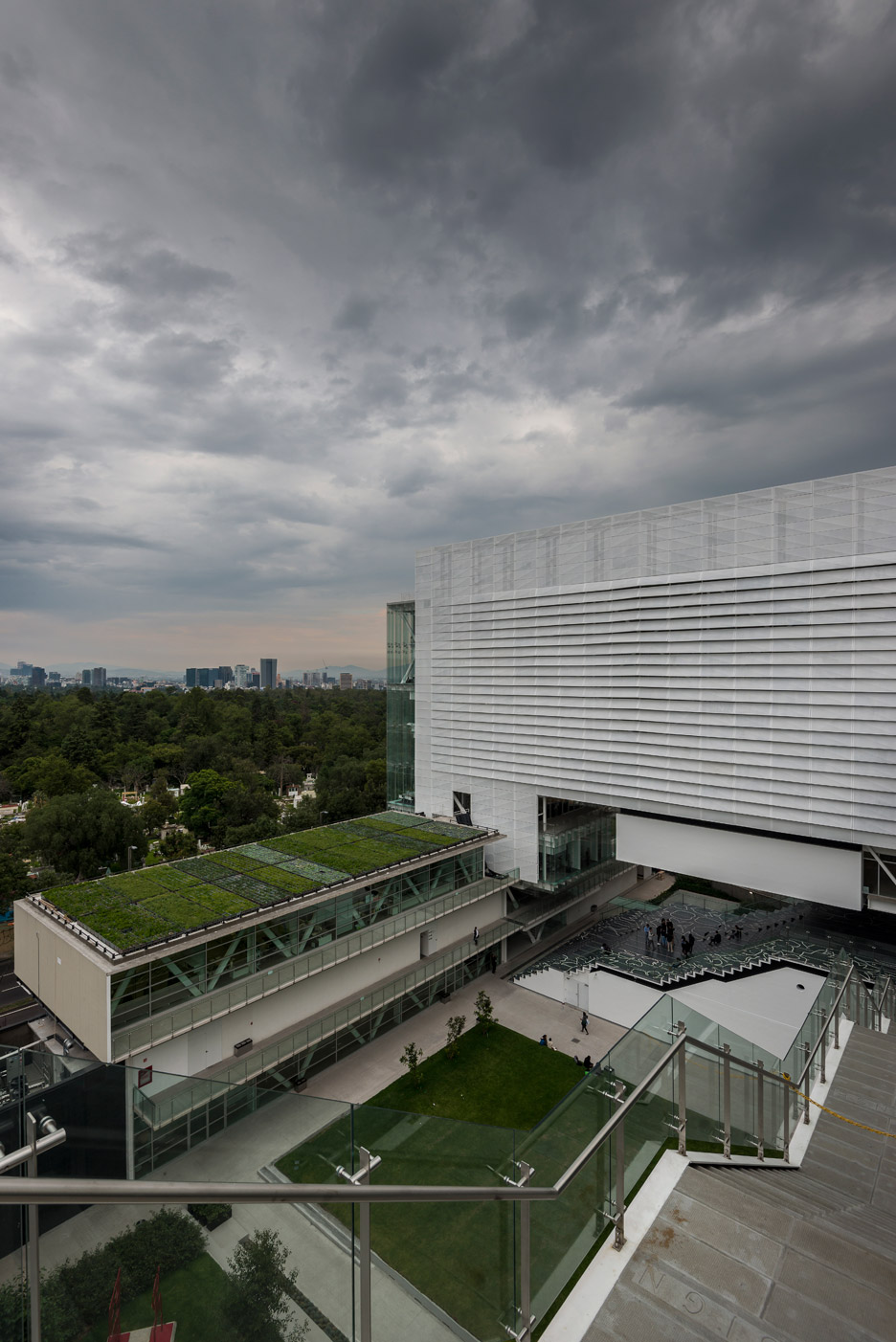 Enrique Norten and his studio TEN Arquitectos have completed a new university campus in Mexico City made up of intersecting blocks that overlook a central lawn and staircase (+ slideshow).

Covering 1.2 acres (0.5 hectares), the campus stands on a dense urban site along one of Mexico City’s busiest streets, Constituyentes Avenue.

The complex is the new home of Centro, a university founded in 2004 that specialises in creative studies. It has approximately 2,500 students and offers degrees in fields such as architecture, industrial design and fashion.

The campus, which opened in September, includes classrooms, studios, offices, a library, an art gallery and a 450-seat auditorium.

The complex – largely made of glass, concrete and steel – consists of three linked buildings and three levels of underground parking.

“The volumes above-grade are layered and interconnected to create a new dynamic central home,” said Ten Arquitectos, which is based in Mexico City and New York.

The built volumes – totalling 279,800 square feet (26,000 square metres) – are organised around a grassy courtyard that “aims to amplify the sense of openness within while blocking noise and visual traffic from Constituyentes Avenue,” said the firm.

The facades bordering the lawn will serve as exhibition space for student work.

At the front of the campus sits a three-storey, boxy structure with offices, a double-height movie forum and five projection rooms. A six-storey building at the rear of the property houses studios and a cafeteria.

Floating between these two buildings is a rectilinear volume that contains a four-storey library, study areas and the art gallery. Interior rooms were strategically positioned to capture views of the campus courtyard and the nearby Chapultepec Park, one the largest city parks in Latin America.

Below the floating volume is a 40-foot-wide (12 metres) monumental stair that doubles as a seating area.

Made of black granite and white resin, the stair was designed by Jan Hendrix, a Dutch-born, Mexican-based artist. An auditorium and snack bar are contained within the 9,680-square-foot (900 square metres) stair structure.

Inside the school, classrooms are fitted out with contemporary furnishings by brands including Kartell, Vitra and Technica. The interior design is by local firm Diarq Diseño y Arquitectura.

“Through an ideal combination of interior studios and outdoor work areas, Enrique Norten’s iconic design allows for fluid teaching methods and cross pollination between Centro’s many creative disciplines,” said the school in a statement.

The campus was built according to LEED Platinum guidelines, thanks to sustainable features including a green roof, solar panels and natural ventilation.

Other recent university projects include a tree-covered campus in Ho Chi Minh City by Vo Trong Nghia and a proposal for a new engineering campus at The University of Manchester by Mecanoo.

Photography is by Luis Gordoa.