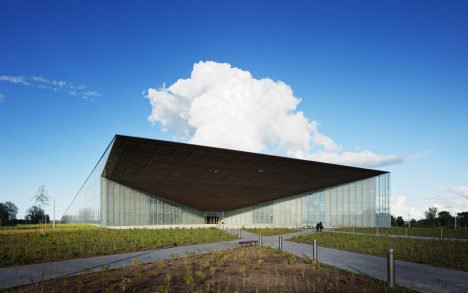 A 350-metre-long glass block ramps up from the runway of a former soviet airfield near the city of Tartu to form the Estonian National Museum, which officially opens to the public today (+ slideshow).

Designed by Paris architecture office Dorell Ghotmeh Tane (DGT), the museum boasts a huge slanted roof that is designed as an extension of the old runway, located a few kilometres outside the city.

DGT won a competition to design the museum in 2005 and first photographs of the building first emerged earlier this summer. But it officially opens to the public on 1 October 2016, following a press preview earlier this week.

This new set of images taken DGT co-founder Takuji Shimmura show the museum and its landscaping just ahead of the opening.

The 34,000-square-metre museum is the largest in the Baltic States. Its exhibitions chart Estonia’s history from the Stone Age to present day.

“Designing a national museum for Estonia was an extraordinary challenge given the country’s many decades of tumultuous history, a history that is recent enough to still remain in the nation’s memory,” said the architects, referring to the country’s not-so-distant Soviet occupation.

“The structure resembles a glass wedge inserted into the landscape that slowly reaches upward from the ground – a built allegory for the country’s emerging history,” they added.

The facades are covered in a printed motif of an abstracted cornflower, Estonia’s national flower, giving the glazing a frosted appearance.

A huge entrance is recessed into the tallest part of the building, which reaches 14 metres.

Inside, gallery spaces, a conference hall, public library, auditoriums, educations rooms, offices and storage space for the museum’s collections are contained within a combination of glazed and opaque boxes.

“The museum has waited for getting its real own home for 107 years and the cultural project to be completed now is the greatest in the history of independent Estonia in financial as well as spatial terms,” said the firm.

“Today ENM is the most modern museum of Europe in form and content,” it added.

Earlier this summer, the Baltic States of Estonia, Latvia and Lithuania presented their first collective show at the Venice Architecture Biennale 2016.

The show, held inside a Brutalist sports hall rather than in its own dedicated pavilion, investigated how the region’s Soviet-era infrastructure should be developed.

Photography is by Takuji Shimmura.