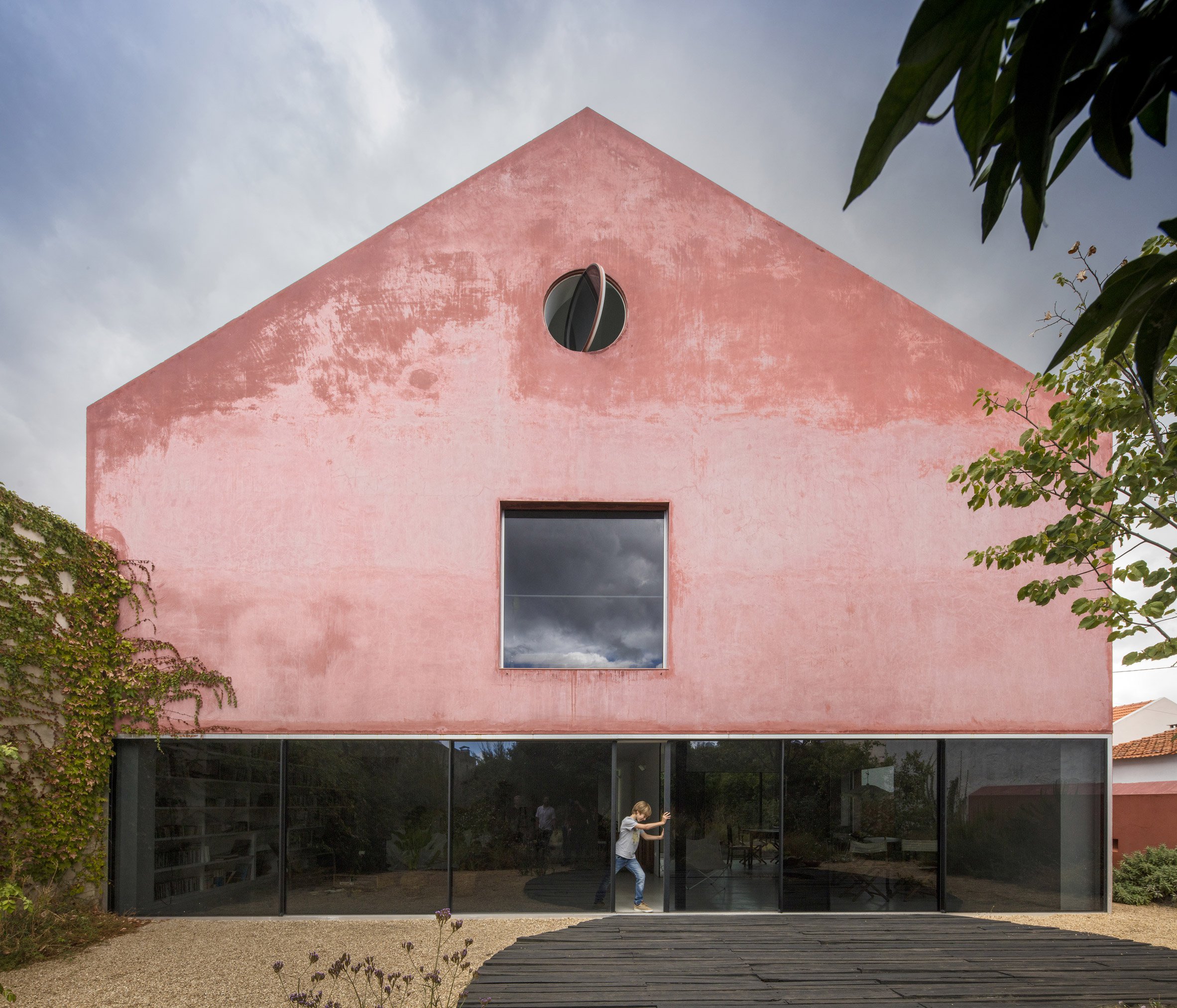 Lisbon-based practice Extrastudio has converted a winery in southern Portugal into a family home by covering its walls with red-pigmented mortar, introducing light wells and adding a black-bottomed swimming pool.

The former winery was built by the client’s grandparents in the 20th century. After inheriting the building, they tasked Extrastudio to create a family residence on the site located in Azeitao, a small village in southern Portuguese city Setúbal.

An orange orchard in the back garden forced the architects to maintain the winery’s original footprint and overhaul the walls of the existing structure instead.

To maintain coherence between new and the old parts of the walls, the architects covered the building in a red-pigmented lime mortar. The application creates a rough texture, with patches of lighter and darker pigmentation.

“A natural red pigment was added to the mortar, to reinforce the building’s presence, allowing the house to age gradually and changing its tonality, without ever requiring a coat of paint,” said the studio.

“Over the days and months, the colour of the house alters, lighter or darker depending on the humidity, almost black when it rains,” it added.

The mortar also includes pozzolans – materials like powdered brick and heat-treated clay – which strengthen it and protect against weathering damage. Mortar also covers the wall fronting the property and the metal entrance gates feature a similar pinkish hue.

The winery has one corner that abuts neighbouring properties. This prevented the addition of new windows on these walls, so the architects cut a narrow courtyard into the corner to bring natural light into spaces at the rear of the house.

On the ground floor, the architects cut out a 14-metre-long window that faces the garden. It is fitted with black glass doors, which slide completely open to connect the combined living space with the gravelled back garden and orchard.

This is landscaped to include a patch of circular decking for outdoor dining made from building’s old timber roof structure.

A raised swimming pool built at the rear of the garden is placed into a gap between the orange trees and a plant-covered wall.

Inside, mirrors line the walls of the lounge to reflect flight, and pale concrete flooring and white-painted walls are used throughout. A series of voids introduced to the connect the ground and upper floor draw down light from the skylights.

The nine-metre-high entrance hall features a window into the yard at ground level, while another window set higher into the wall allows light to enter the first-floor corridor.

Bedrooms and bathrooms are placed on the first floor, which connects with a small attic room in the apex of the roof. Its walls, floors and ceiling are painted white, and the space is brightly illuminated by a series of rooflights and a pivoting porthole window.

Extrastudio was founded in Lisbon in 2003. Its previous projects include a delicatessen with a decorative perforated ceiling, which is also in Setúbal.

Setúbal is one of the cities bordering Portugal’s huge protected parkland, the Serra da Arrábida, where architect Eduardo Souto de Moura has completed a bright white house that contrasts the surrounding greenery.

Photography is by Fernando Guerra and Extrastudio.