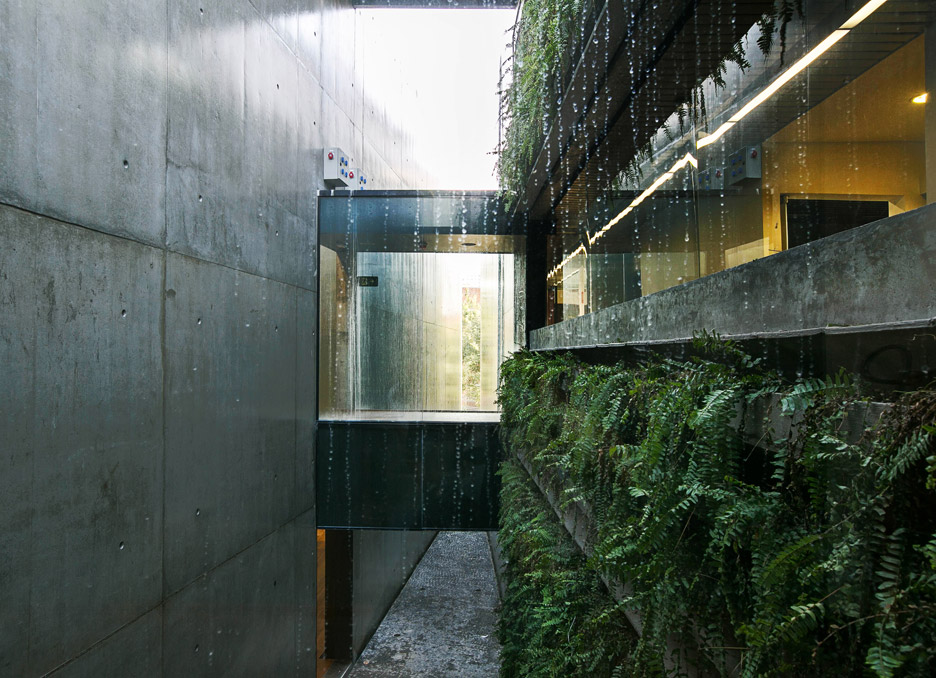 Slabs of folded concrete give this cultural centre by São Paulo Arquitetura a seemingly impenetrable appearance, but hidden behind its windowless walls are light-filled galleries and a plant-lined gully (+ slideshow).

Named Espaço Cultural Porto Seguroto, the “monolith” structure was designed by São Paulo Arquitetura to host a range of exhibitions, workshops, symposiums and parties in the Brazilian city.

It opened at the end of January 2016 with its inaugural show, featuring replicas of work by Renaissance artists Leonardo, Michelangelo and Raphael.

The building has an asymmetric form comprising both chunky concrete walls, tilted to give a folded appearance, and wooden latticework.

“The concrete facade with folds creates shadows that become light when the visitors access the interior of the building.”

The programme is divided into two blocks that sit side by side, but which are separated by a narrow planted crevice that brings natural light and air into the building.

Brazilian studio AR Arquitetos used a similar format for an artist’s studio in the city, which has stark concrete walls but a glazed atrium at its centre that creates a light-filled space for painting.

The narrower of the two blocks contains offices, classrooms and toilets, while the larger hosts a double-height exhibition space with a mezzanine floor.

Two basement levels stretch under both parts of the building, and contain further exhibition spaces and technical rooms.

The concrete walls angle inwards at the gallery side of the building, directing visitors towards a wooden door.

“An invitation to the public is made through large entrances without physical barriers and with a welcoming character,” said studio. “The folds guide the route and encourage curiosity to discover a new space.”

Inside, an imposing slab of concrete tilts over the doorway to create a semi-contained entrance hall, which opens into the primary exhibition space.

This wall directs a sliver of light from a skylight into the gallery, which is distinguished from the entrance hall by a transition from concrete to timber flooring.

A glazed corridor affixed to the outer wall of the gallery leads to the mezzanine level. The ramped walkway runs parallel to the street, to encourage visitors to pause and take in views of the Campos Elíseos neighbourhood.

The once-grand neighbourhood has seen considerable decay in recent years. The cultural centre forms part of a wider restoration of the area.

“The region went through a messy process of development, and currently Campos Elíseos has abandoned mansions and a deep stage of social problems,” said the architects.

“It ended up receiving the nickname of ‘Crackland’ due to the excessive consumption of hallucinogens that occurs in the local streets.”

“In contrast to this harsh reality, the new cultural centre came to encourage the transformation of the region and improve the local urban scene,” they added.

The long street-facing facade of the administration block has a double facade made from a grid of concrete and a wooden latticed screen.

This arrangement obscures views into office, toilets and teaching spaces from the street, while still allowing natural light and air to circulate through the building.

A public square in front of this facade leads to the centre’s restaurant and gift shop.

Photography is by Fabio Hargesheimer and São Paulo Arquitetura.