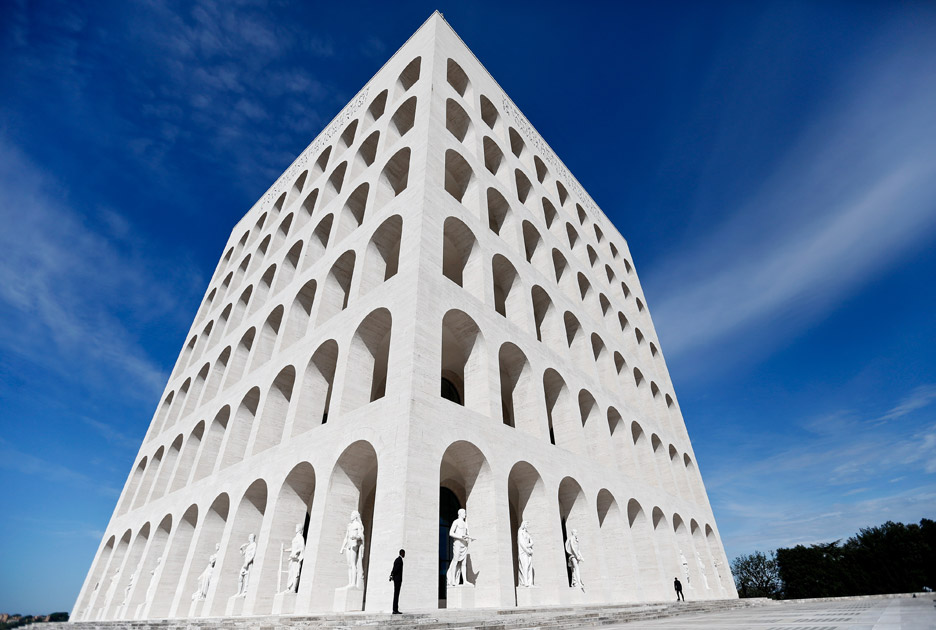 Italian fashion house Fendi has moved into its new headquarters at Rome‘s Palazzo della Civiltà Italiana – a building commissioned by dictator Benito Mussolini in 1943 that has been renovated by local architect Marco Costanzi (+ slideshow).

Designed by architects Giovanni Guerrini, Ernesto Bruno La Padula and Mario Romano, the six-storey Palazzo della Civiltà Italiana was intended to be the centrepiece of Mussolini’s new Roman empire, but was abandoned due to his involvement in the second world war.

The building was left in a state of disrepair, being used only briefly by a state labour institute before Fendi‘s 18-month renovation – which has reportedly cost millions. The project has been led by Costanzi, who previously designed Fendi’s Rome showroom.

Clad in travertine marble, all four facades of the cuboid-shaped building feature a grid of six-by-nine archways, which are rumoured to represent the number of letters in Benito Mussolini’s name.

Around the base of the building, 28 statues representing various industries and trades are tucked underneath individual arches.

Inside, the original marble stairways and floors were well preserved and remain in place, but the building has been fully fitted out to house Fendi’s 450 employees.

The ground floor will become a permanent free-entry gallery space, allowing the general public entrance to the building for the first time in its history.

The move coincides with the fashion house’s 90th anniversary, as well as German fashion designer and Chanel creative director Karl Lagerfeld’s 50th year with the company.

Fendi’s move to the Palazzo has been met with mixed opinions. In an article written for the Architectural Review, Owen Hatherley stated that it “propounds a notion of ‘good taste’ that is deeply similar to that of the fashion industry – shamelessly elitist, wilfully sinister, hierarchical, Classical, its apparent minimalism belied by an obsession with the finest possible material and the severest cut”.

“However much the architecture of the era can be interesting and attractive, its values were deeply sick,” he continued. “It is right that its architecture remain tainted.”

On the other hand, according to the Guardian, Fendi’s chief executive Pietro Beccari believes it is these views that are doing Rome’s future a disservice.

“Rome is on the verge of explosion,” he said. “It will become a real European capital. Let’s talk about what is right and what works rather than what is not right in Italy. It is too reductive or diminishing to say that people should not profit or praise the beauty of this [building], because people do.”

Founded in 1925 in Rome, Fendi is renowned for its use of fur, and produces ready-to-wear clothing, leather goods, shoes, fragrances, eyewear, timepieces and accessories.

The brand previously collaborated with Zaha Hadid to create a layered leather handbag, which was part of a collection of creations by famous UK-based women to be auctioned for charity.

Earlier this year, OMA converted a century-old distillery in Milan into a new arts centre for Fondazione Prada – a cultural organisation dedicated to art, cinema and philosophy that was established by the Italian fashion house Prada in 1993.

Last year, Frank Gehry completed a permanent centre for Louis Vuitton‘s charitable organisation that is, similarly to Fondazione Prada, centred around the promotion of contemporary arts.

All images are courtesy of Getty Images.