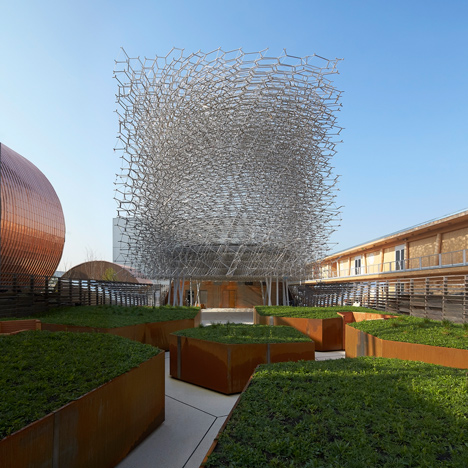 The first photographs of Wolfgang Buttress’ UK pavilion for the World Expo 2015 in Milan have emerged, revealing that its structure is now complete (+ slideshow).

Nottingham-based artist Wolfgang Buttress teamed up with designer and engineer Tristan Simmonds to create the pavilion, which is designed to resemble a giant beehive at the centre of a wildflower meadow.

Architectural practice BDP and construction and manufacturing firm Stage One were part of the team that helped build the project.

The structure is one of the first to complete on the Milan Expo site, which is due to open in two weeks. At the first official viewing yesterday, attended by Dezeen and a small group of pavilion participants, sponsors and supporters, British ambassador to Italy Christopher Prentice described the pavilion as “a 21st century marvel amid quite a few boxy nonsenses”.

According to the design team, visitors to the pavilion “follow the dance of a bee” through a series of different landscapes. The journey begins at small group of trees, leading to an entrance corridor that features displays with information about the lifecycle of bees and their role in pollinating food crops.

Once inside the British enclosure, visitors walk through an arrangement of rusted planters filled with grasses and wildflowers that will grow over the course of the expo to create the impression of walking through a meadow.

Small speakers scattered among the planters play a constantly changing composition of music and bee sounds – including a range of noises that have been recorded for the first time as part of a scientific research project into the health of bee colonies at Nottingham Trent University.

These noises are linked to the activity of a real beehive in Nottingham, and increase in volume when the hive is more active.

At the end of the meadow area, visitors walk into an interactive display space underneath the hive structure, where bone-conducting headsets allow them to experience different kinds of bee sound – including the unique buzzes of a virgin bee challenging the queen and a forager bee performing a “waggle dance” to communicate information to other bees in the colony.

To access the hive itself, visitors will climb stairs leading onto the roof of a single story building, which houses toilets and a conference facility, and is clad in a rusted metal that matches the planters.

This 14-metre-cubed structure, made from a lattice of 169,300 pieces of aluminium and steel, integrates audio and visual effects that also respond to movements of the beehive in Nottingham. LED lights are set into resin diffusers arranged around the dome-shaped void at the centre of the structure.

“When it gets dusky and you see the LED lights on and you stand at a distance, actually it looks exactly like the visual,” said Adam Wildi, project manager for Yorkshire-based Stage One, the firm that also helped build Thomas Heatherwick’s London 2012 Olympic Cauldron.

“It’s uncanny. There’s so many components, the LED causes a haze that defeats the eye a bit,” he told Dezeen. “I’ve never built a wildflower meadow on a scaffolding platform before. This is a unique piece of art.”

Although many of the other pavilions on the expo site are far from finishing, the main structure of the British contribution is now finished. Scaffolding was removed on 31 March allowing final touches to be added prior to the public opening on 1 May.

“Our projects are always a giant jigsaw puzzle. We just push hard and our coordination is good,” said Wildi. “We’ve got two weeks to go before the public come in, and we’re hosting an event, so that tells a tale.”

“This pavilion is about pollination and pollinators, but it’s also a story about the way we need to bring together disciplines, about the way that science and art and business and nature and technology all need to combine if we are to find solutions to the problems of the future,” said the UK commissioner general Hannah Corbett.

The Milan Expo will take place between 1 May and 31 October 2015 with the theme “Feeding the Planet, Energy for Life” and will showcase designs centred around sustainability, technology and food.

During the event, British chefs including Tom Aikens, Angela Hartnett and Ken Hom will be serving food made with UK-sourced ingredients and produce, while fashion designers will demonstrate sustainable British clothing design.

The Natural History Museum will also export its wildlife photography exhibition to the pavilion.