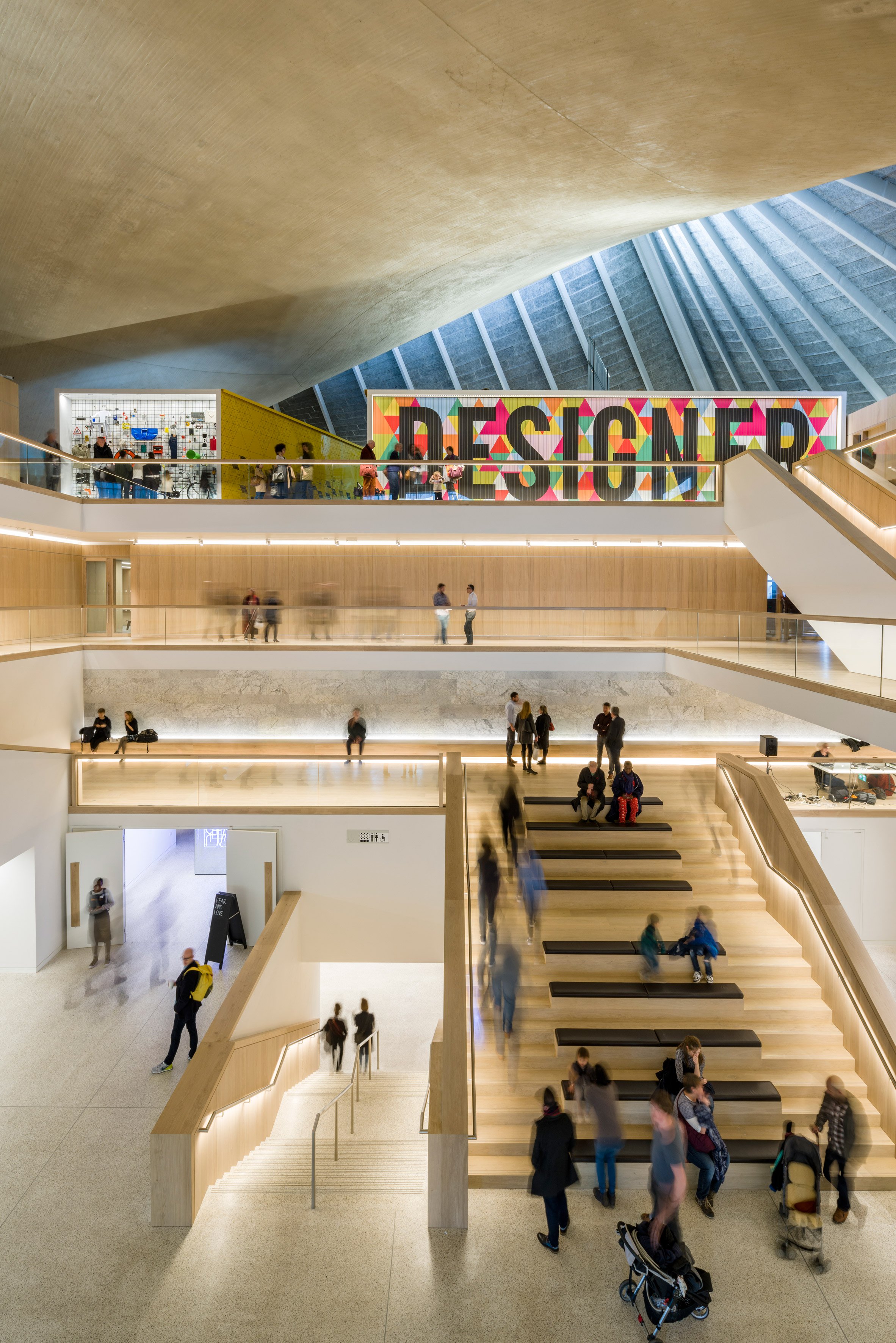 These photographs taken by Rory Gardiner offer a glimpse of the interiors created by John Pawson for the new Design Museum ahead of its official opening next week.

These shots, taken at a friends-and-family event before the Design Museum’s press preview tomorrow and its public opening on 24 November 2016, show the £83-million transformation of the Grade-II*-listed building.

Pawson’s conversion of the 1960s building provides the museum with almost 10,000 square metres of gallery spaces – triple the space available at its previous east London location in Shad Thames.

This allows the museum to simultaneously host a permanent display of its collection and two temporary exhibitions.

The exhibition spaces are arranged around a large atrium in the centre of the building, where the underside of the distinctive hyperbolic paraboloid roof is revealed. The space is overlooked by wood-lined galleries and features broad flights of steps that double as seats.

The museum’s opening exhibition — named Fear and Love: Reactions to a Complex World — is organised by the museum’s chief curator and Dezeen columnist Justin McGuirk. It will run concurrently with the ninth edition of the museum’s Designs of the Year.

As well as the primary exhibition space, the building hosts the Swarovski Foundation Centre for Learning, the Bakala Auditorium, the Sackler Library and Archive and a Designers in Residence Studio. There is also a cafe, a restaurant, and a members’ room.

Spaces throughout are furnished by Vitra, and the £20-million interior fit-out was carried out by Willmott Dixon Interiors.

Studio Myerscough has designed the permanent display areas, while the museum’s visual identity was overhauled by Fernando Gutiérrez Studio. Lighting has been devised by Concord, and Cartlidge Levene created the signage system.

The Design Museum shut the doors at its former Thames-side home in June 2016. The building was sold to Zaha Hadid Architects in 2013 in a deal believed to be worth £10 million, and the proceeds gifted back to the museum by designer Terence Conran, who founded it in 1989.

Pawson’s plans for the Design Museum’s new home were first unveiled in 2012 and slated for completion in 2014, but delayed until late November 2016 following issues with the renovation of the building.