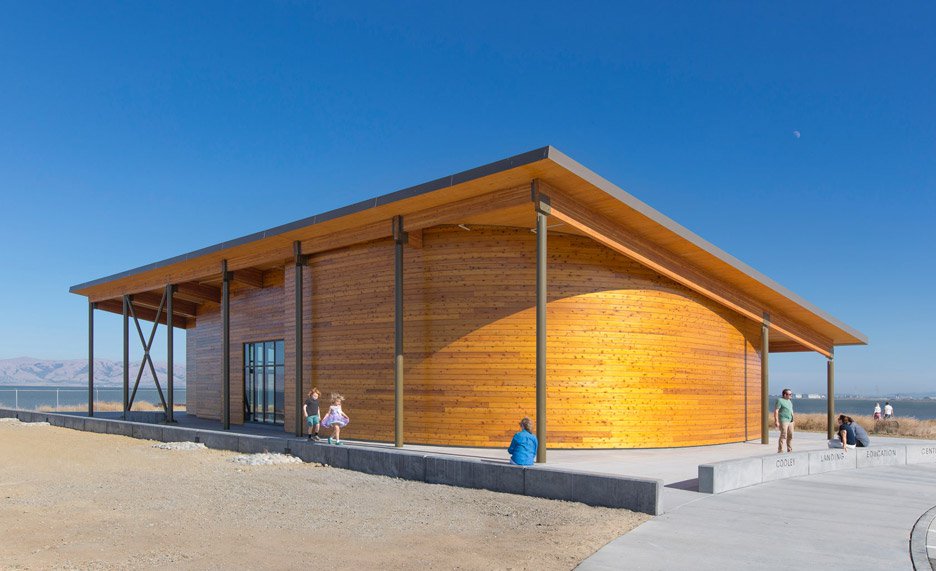 A+Awards: California firm FOG Studio worked with the residents of East Palo Alto to design this bayside community centre and exhibition space, another winner at the 2016 Architizer A+Awards.

The Cooley Landing Education Center is located on a peninsula at the southern end of San Francisco Bay. It sits on a former landfill site, which was recently reclaimed and now serves as a nature reserve.

Two feet (just over 60 centimetres) of clean-fill materials was used to top the area to avoid potential hazards, while the building’s site was capped with structural slabs and landscape paving.

“There were significant challenges to the site, which is not only underlain with bay mud in a highly seismic area, but which served as a burn dump for several decades,” said FOG Studio, which was chosen to design the centre via a public vote.

The architects worked closely with local residents throughout the process, which involved eight meetings to decide the building’ programmatic elements, form, materials and aesthetics.

The resulting 4,000-square-foot (372-square-metre) structure houses exhibits on local natural history, while providing spaces for the community to meet, learn and celebrate.

A large multipurpose rooms occupies the majority of the floor plan. It is fronted by a curved wall that forms the north and west facades, and is clad with horizontal timber strips both inside and out.

Towards the back are a kitchen, storage spaces and restrooms open to park visitors, all faced in brick across the exterior.

The building was designed to reflect the history of the area, which was formerly known as Raven­swood.

“Its significance as a shipping hub in the 1800s is acknowledged by the hull and sail forms sculpted in wood, while the brickworks that supplied materials for San Francisco’s Palace Hotel are honoured by the brick service cores,” said the architects.

Rainwater that falls off the slanted metal roof flows into tidal sloughs that meander through the site.

Cooley Landing Education Center won in the Gallery category at the 2016 A+Awards.

Their stated mission is to nurture the appreciation of meaningful architecture in the world and champion its potential for a positive impact on everyday life.

Find out more about the A+Awards ›

Photography is by Michael O’Callahan, FOG.