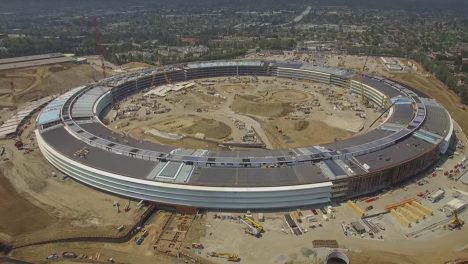 This unofficial drone video captures the construction of Foster + Partners’ Apple headquarters in California as the outer shell of the campus nears completion (+ movie).

The movie, uploaded by YouTube user Matthew Roberts, shows the main hub of the campus – a hoop-shaped structure dubbed the Spaceship – taking form as cranes finish installing the exterior canopy.

A series of drone movies shot by amateurs have been uploaded during the project’s 32-month construction period, which is due to finish later this year.

From the high-definition aerial footage, viewers can see the first solar panels being installed on the building’s roof.

Work has begun on the bicycle parking locations, while the separate four-storey car park now has paved ramps and bridges and is approaching completion.

The movie also shows fuel cells and generators being installed as part of the onsite power plant, which will provide the majority of electricity for the campus.

The auditorium, which will seat 1,000 people and provide panoramic views of the site, is also underway, as well as the $70 million (£52.6 million) corporate fitness centre. Two further buildings are intended to provide additional research facilities.

The 260,000-square-metre site will be 80 per cent landscaped green space when completed. The building’s circular form is designed to promote creativity and collaboration by encouraging staff to interact with their surroundings.

“For me this project started in the summer of 2009,” said Foster in a movie by Cupertino City Council. “Out of the blue a telephone call. It’s Steve: ‘Hi Norman, I need some help.’ I was out there three weeks later.”

Yesterday Apple released its hotly anticipated iPhone 7, as well as an Apple Watch designed for swimmers and wireless headphones. The launch was met with mixed reactions.