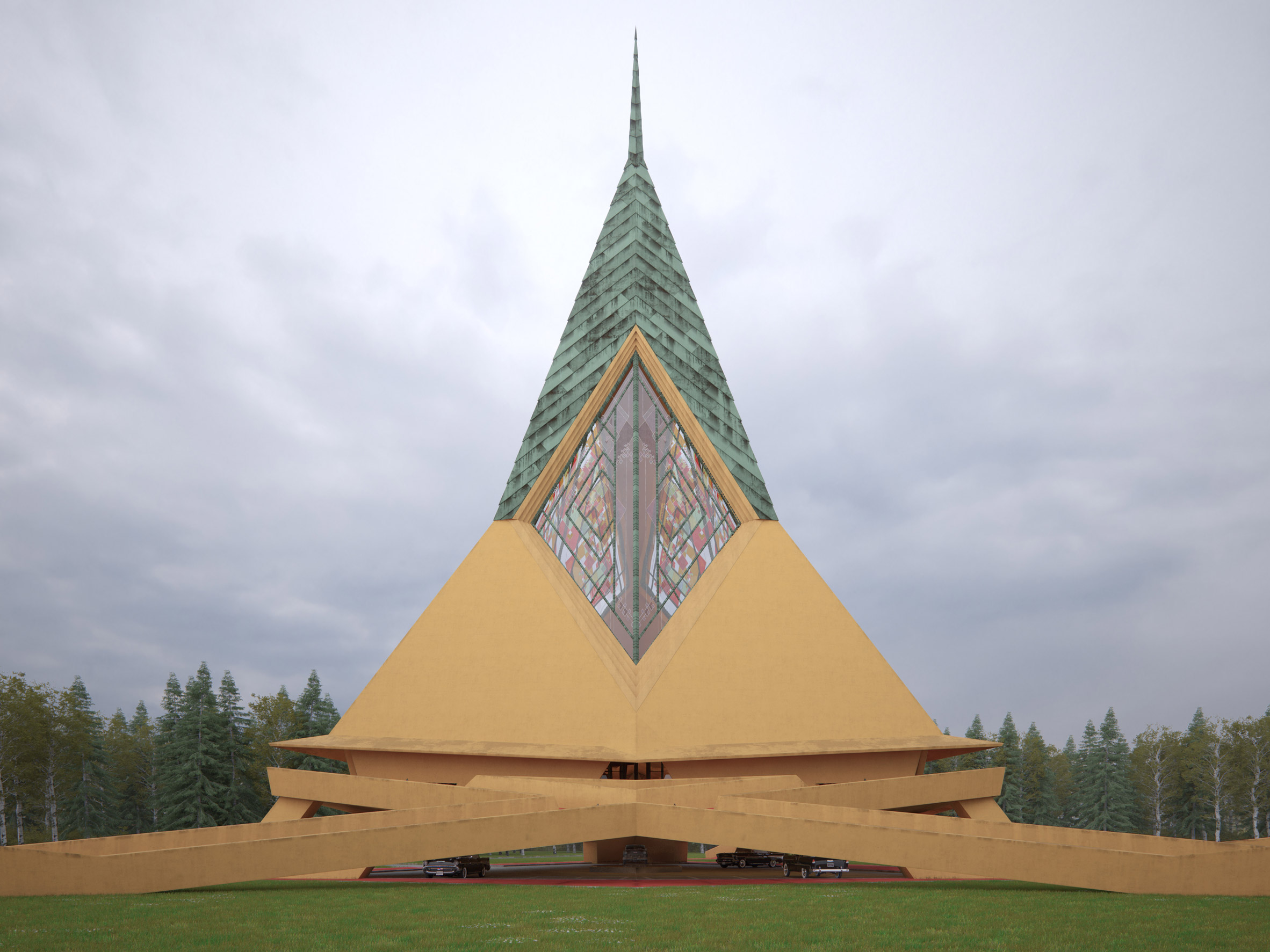 An unbuilt chapel designed by Frank Lloyd Wright has been realised in these colour visualisations by architect David Romero, featuring red walkways, a green shingle spire and stained-glass windows.

The images of Trinity Chapel form part of Romero’s Hooked on the Past series that visualise the buildings of American architect Frank Lloyd Wright, including the demolished Larkin Administration Building and ruined Rose Pauson House.

The Spanish architect chose to recreate the exterior and interiors Wright’s unbuilt chapel because he wanted to reveal the intricacies of the design – a common feature of the Wright’s religious architecture.

Wright is considered one of the 20th century’s most important architects, and his work is credited a precursor to modernism.

“Among Wright’s designs that never came to be realised this is one of the most delicate, as the American genius always managed the religious works with true mastery,” Romero told Dezeen, “so now we can change history and explore what would have happened if Wright’s design had been built just as he had imagined it.”

Frank Lloyd Wright designed Trinity Chapel in 1958 for the University of Oklahoma in Norman but it wasn’t built because of a misunderstanding between the architect and his client Fred Jones.

Jones, a car dealer, wanted the chapel to be an extension of the university. Instead, Wright conceived a free-standing triangular building wrapped by zigzagging pathways.

Romero captured the unusual shape of the building on modelling programmes AutoCAD and 3ds Max, detailing the three triangular corners that form the base and the underground carpark.

He then used Vray to add colours and textures, including the green shingles that from a spire at the top of the building, the yellow facade and red pathways, as well as the surrounding forest.

Romero had to imagine some of the details of the design, including the pond that flanks the building and the diamond-shaped stained glass windows on the exterior.

“I have had to speculate in some details that were not yet designed by Wright, such as the design of the stained glass, the pulpit or the large pond, but always thinking of what Wright would have done if he had had the opportunity to continue his assignment.”

His images show the colourful light that these windows bring inside, which Romero has also furnished for the projects. Wooden pews with blue cushions surround the central pulpit complete with a podium structure.

Among Frank Lloyd Wright’s most famous projects is the 1927 Fallingwater house in Pennsylvania, the 1939 Johnson Wax headquarters in Wisconsin and the 1959 Guggenheim Museum in New York.

In 2015, 10 of his buildings were nominated for UNESCO’s World Heritage List.

New York’s Museum of Modern Art will host a major retrospective of Wright’s work this year to coincide with what would have been his 150th birthday.