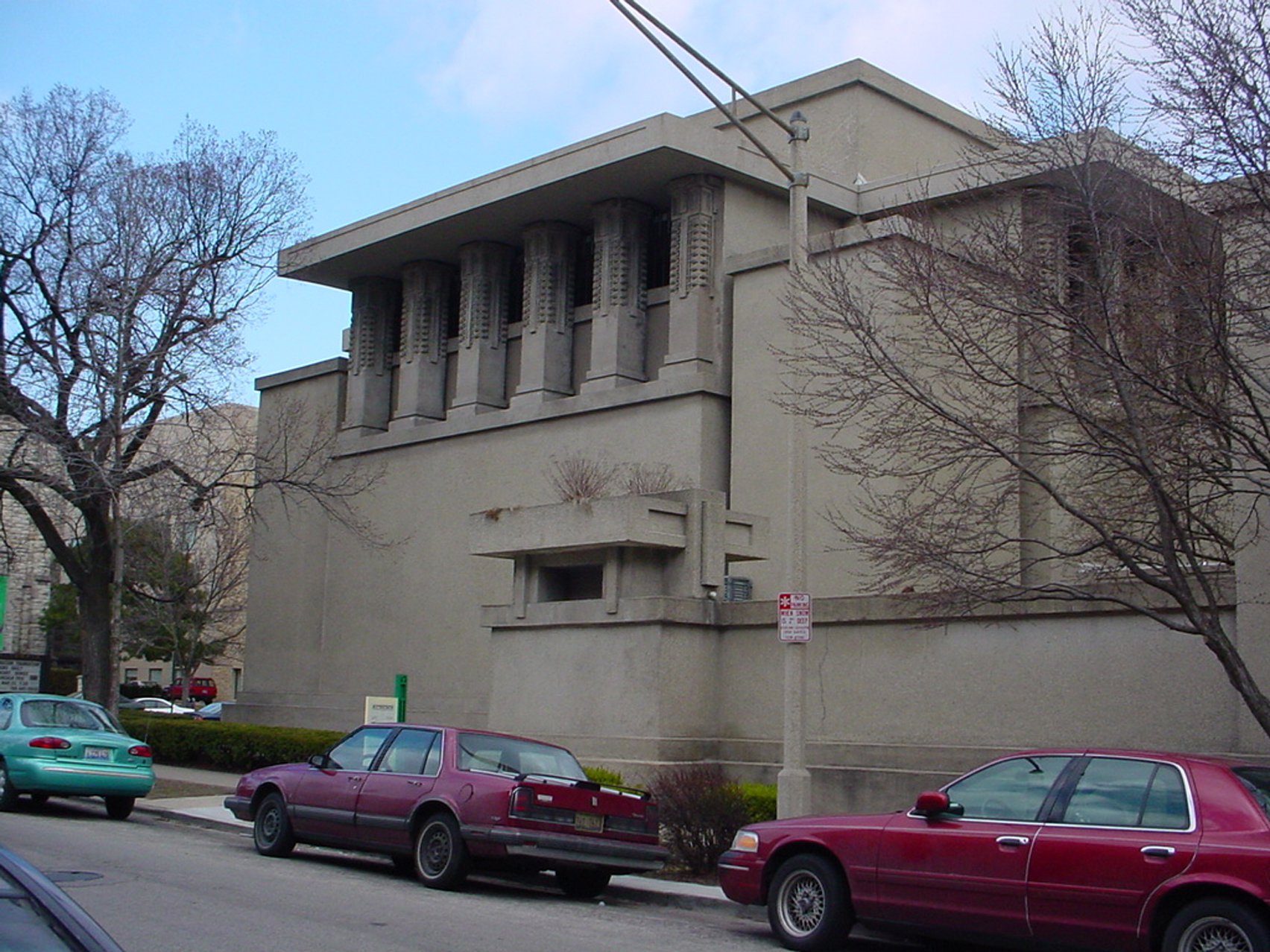 We’re continuing our look back at Frank Lloyd Wright‘s most important projects, in celebration the anniversary of the American architect’s 150th birth last week. Next is Unity Temple, the Prairie-style concrete church that he considered to be his first contribution to modern architecture.

Wright designed Unity Temple in 1905 for the Unitarian Universalist congregation of Oak Park Unity Church, which included his mother, after the original building burned down.

Located in Chicago’s Oak Park, near Wright’s studio, the church was led by minister Rodney Johonnot.

He was known as a particularly open-minded leader of Unitarian Universalism – a liberal religious movement focused on the search for spiritual growth, which combines many different beliefs.

In response to Johonnot’s wish for a modern building, the design of Wright’s monolithic Unity Temple with no steeple or clear entrance was unlike other places of worship.

Among the architect’s more progressive choices was to construct the building from poured-in site reinforced concrete, which was predominantly only used for factories and warehouses at the time.

The concrete allowed Wright to keep within the tight budget of $45,000 (approximately £35,505) and add exterior ornamentation – including decoration on the upper-level colonnade – during the construction to reduce costs.

Flat roofs with overhanging eaves that top the series of volumes that make up the building are intended to blend into the surroundings, rather than a visible landmark.

This approach follows Wright’s Prairie style, which was informed by the flat and broad landscapes of America’s Midwest and was considered the country’s first unique architectural style. Wright later “consummated” the style in his 1910 Robie House in Chicago.

In order to accommodate separate spaces for worship and the community at the temple, Wright divided the building into two separate volumes. Unity Temple provide spaces for the community to worship, while Unity House was intended as the socialising space.

A low entrance hall slots between the two blocks, with an inscription carved above the doors that reads in capital letters “For the worship of God and the service of man”.

The entrance is hidden from the street, which, along with a lack of windows at street level, serves to create a building that appears impenetrable.

Clerestory windows and skylights are used bring plenty of light inside both of the volumes.

In the four-storey worship space, 25 stained glass windows are coloured in hues of yellow and brown, to reference natural tones.

Featuring a square plan, the room is enclosed by seating on three sides, intended to provide each member of the congregation with close contact to the minister during service.

The adjacent parish house is arranged around a central fireplace hearth, in a similar way to many of Wright’s residential projects.

Unity Temple was completed in 1909. Wright, who is considered one of the 20th century’s most important architects, later said that it marked a defining period of modern architecture.

“Unity Temple makes an entirely new architecture — and is the first expression of it,” said Wright. “That is my contribution to modern architecture.”

The Frank Lloyd Wright Trust, which was set up following the architect’s death, described the building as his “greatest public building of the architect’s Chicago years” and it was named a United States National Historic Landmark in 1971.

The building, which is still used by the Unitarian Universalist congregation, has suffered serious water damage.

A huge $23 million (£18 million) restoration began in April 2015 and completed this year – just in time to open to coincide with Wright’s birth anniversary on 8 June 2017.

The open house was one of a series of events that took place to mark the occasion. On the same day, MoMA opened its major retrospective exhibition presenting the architect’s archive of drawings and models.