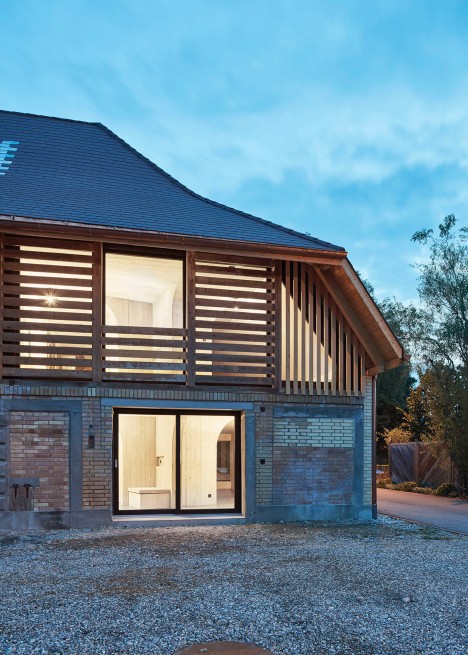 Swiss practice Freiluft has inserted a branching concrete structure inside an old barn in Switzerland‘s Emmental valley, as part of its conversion into a pair of apartments.

The Bern-based studio led by Matthias Zuckschwerdt, Alexander Grünig and Martin Klopfenstein designed the concrete “tree” not only to provide structural support for the roof of the ageing barn but a series of new rooms within it.

The structure is made up from slabs of board-marked concrete with curving edges that create arching doorways within the residence.

The concrete core extends through three floors at one end of the building and operates as a service island containing stairs, bathrooms and the kitchen.

“For us, the house needed something rough and immediate, something that could build up its own world in the former barn and hayloft,” explained the architects.

“A concrete object now cuts through all three floors and supports the old roof,” they added.

“In addition to its structural qualities, it holds all the bathrooms and kitchen accommodations, as well as cabinets and storage space.”

While the floors are also made from board-marked concrete, the walls and cabinetry built into the concrete core are made from birch plywood.

Internal windows overlook a triple-height hallway in the centre of the barn, where areas of the original walls are left exposed to reveal a patchwork of stonework, brick and aged timber boarding.

This effect is replicated in the new areas of the building, which is built up from courses of brick and slabs of concrete, and has outward-facing windows covered in slats of timber

Berlin architect Thomas Kroeger used a similar patchwork of materials when he converted an old cowshed into holiday home and guest house featuring a combination of new and original woodwork and brick.

Photography is by David Aebi.