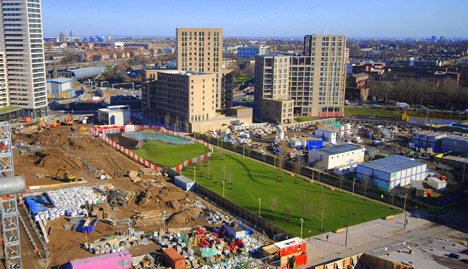 A naturally filtered outdoor swimming pool is taking shape as part of the redevelopment of King’s Cross in London.

The project, called Of Soil and Water, is described as the UK’s first man-made bathing pond filtered using natural processes.

Conceived by Rotterdam studio Ooze Architects and Slovenian artist Marjetica Potrč as both an art installation and a public facility, the pool will be cleaned using wetland flora and submerged plants rather than chemicals or machinery.

It is located within the new Lewis Cubitt Park, close to the campus of design school Central Saint Martins, which forms part of the 27-hectare redevelopment of the area behind King’s Cross station.

“The project is an attempt to capture the dynamicity conveyed by the changes within the area, a moment in time where new possibilities and possible futures arise,” said architect Eva Pfannes, who co-founded Ooze with Sylvain Hartenberg.

The pool is built two metres above ground level, with salvaged bricks and stones used to create a basin that measures 40 by 10 metres.

“The project is a small-scale enclaved environment, a living laboratory to test balance and to question a self-sustaining system including one nature cycle – water, land and the human body,” Pfannes added.

The pool is designed for use throughout the year, but the number of swimmers allowed to bathe each day will be restricted in line with the cleaning capacity of the plants.

Hard and soft landscaping surrounding the water’s edge includes wild flowers, grasses and bushes so the environment will change with the seasons.

The park’s vicinity is currently a construction site, but it will be surrounded by buildings once the redevelopment work is complete.

“We wanted to explore the concept of water, something which is often hidden away in urban landscapes,” said Hartenberg. “In this particular project, the juxtaposition of something so natural in an urban environment was a very important idea for us.”

“We have to re-think how we live with the city and with nature,” added Potrč. “Here, we are collaborating with nature and the artwork encourages the viewer to participate in that experience. Water is a source of life but it is also a metaphor for regeneration.”

Work on the pool and landscaping is ongoing, but visitors will be able to take a dip from the first week in May.

The project is the latest example of a growing trend for natural bathing. Freshwater pools have also been proposed for London’s River Thames, while Herzog & de Meuron completed a biologically filtered swimming area in Switzerland last summer.