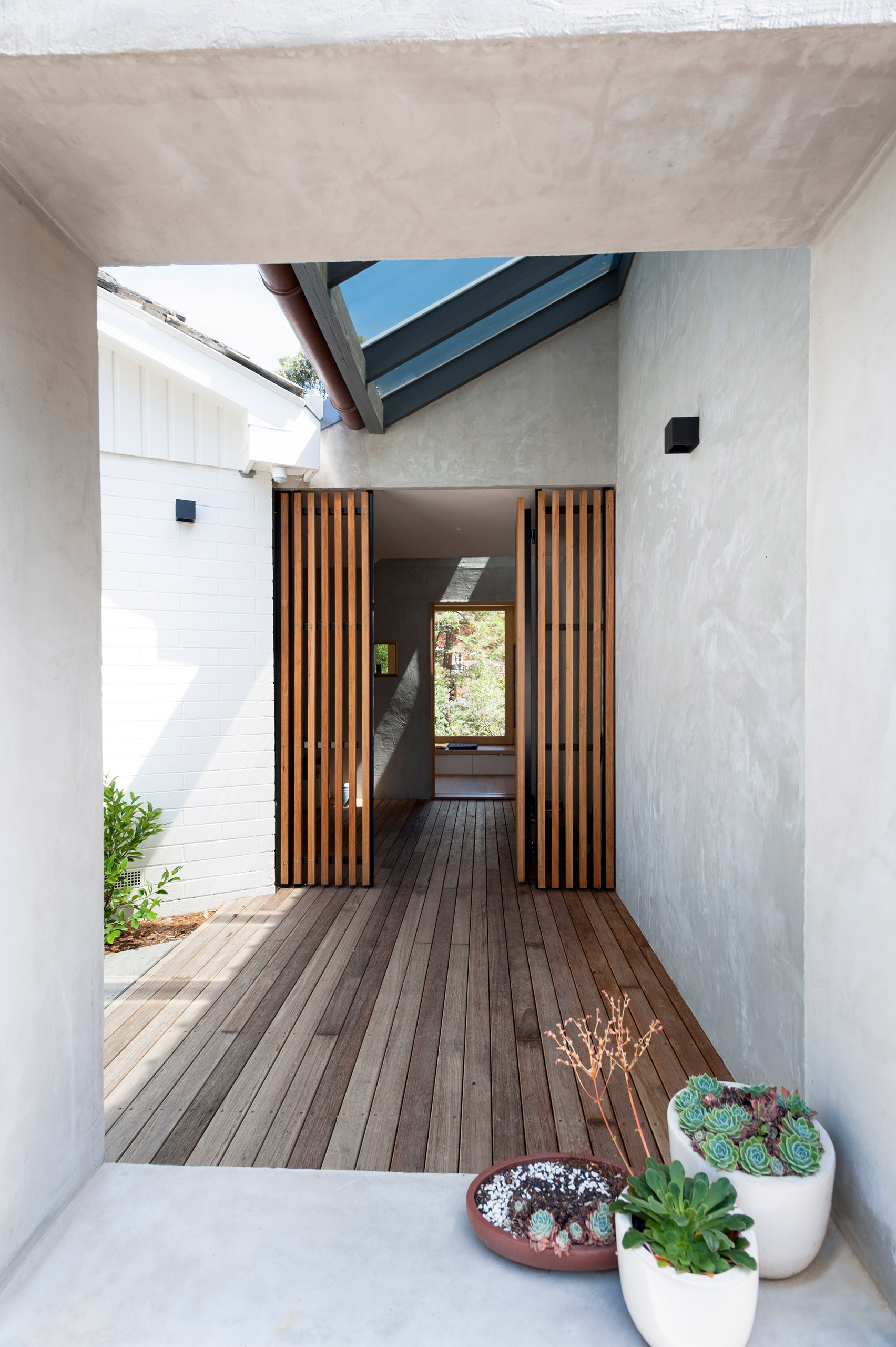 Inbetween Architecture’s founder John Liu added this gabled extension to his home in suburban Melbourne, creating a new entrance that leads straight through to a garden at the rear.

Liu’s firm designed the extension to accommodate a new master suite and a secure entrance at the 1970s property, which is set in the city’s Doncaster neighbourhood.

In addition to reconfiguring the interior of the existing house to suit the family’s changing lifestyle, the large triangular plot offered an opportunity to expand into an unused area at the side of the house.

However, it took 12 months of negotiating with the local council and neighbours to obtain permission to circumvent regulations dictating that any extension should be set back nine metres from the street.

Liu’s main objective with the new addition was to create a practical and welcoming entrance space that also helps to maintain and enhance the connection with the rear garden.

The solution is a simple volume featuring clean lines and a contemporary material palette that distinguishes it from the main building.

“The form of the addition closely references the typical gable form of the existing house but juxtaposes it with fiercely contemporary detailing and materiality,” said the architect.

The extension occupies a spot at the highest point of the sloping site. Its plain gable end is interrupted only by a rectangular aperture that frames a view of the new entrance.

A sheltered deck behind the facade forms a clearly defined entrance that extends beyond a front door shielded by vertical louvres into a secure porch.

Cement walls lining the porch mark it out as part of the transition from exterior to interior. A skylight integrated into the narrow-profile roof illuminates the front door.

The introduction of this foyer space is a nod to Liu’s Taiwanese heritage, which requires an area to remove shoes before entering the home.

Immediately inside the building, a fully glazed sliding door provides a direct connection out to the rear garden. Wooden steps on the other side of the door descend to the level of the lawn.

“This glazed bridge forms the connection between the old and the new and is set down from the main living zone, helping the extension sit snugly on the site,” said Liu.

The new master suite with its own bathroom and walk-in wardrobe is positioned to the right of the entrance.

To the left, the three existing bedrooms are arranged at the front of the house, with the reconfigured living spaces facing the garden at the rear.

A corridor dividing the interior of the existing building was removed to create a seamless connection between the living room and dining area, which make the most of their northerly aspect and elevated position.

The dining room is flanked on one side by the kitchen and on the other by an existing balcony overlooking the garden.

An undercroft at the rear of the building contains a home office and children’s play room, as well as storage areas, a laundry and car port. A new secondary entrance and staircase were added to connect the two levels.

“The outcome is a fully updated home, suitable for the changing demands of a contemporary family lifestyle,” said Liu.

“It maintains a comfortable and lived-in ambiance and pays homage to the best aspects of the original cottage.”

Other recently additions to Melbourne homes include an asymmetric extension designed as a reinterpreted of the typical lean-to.