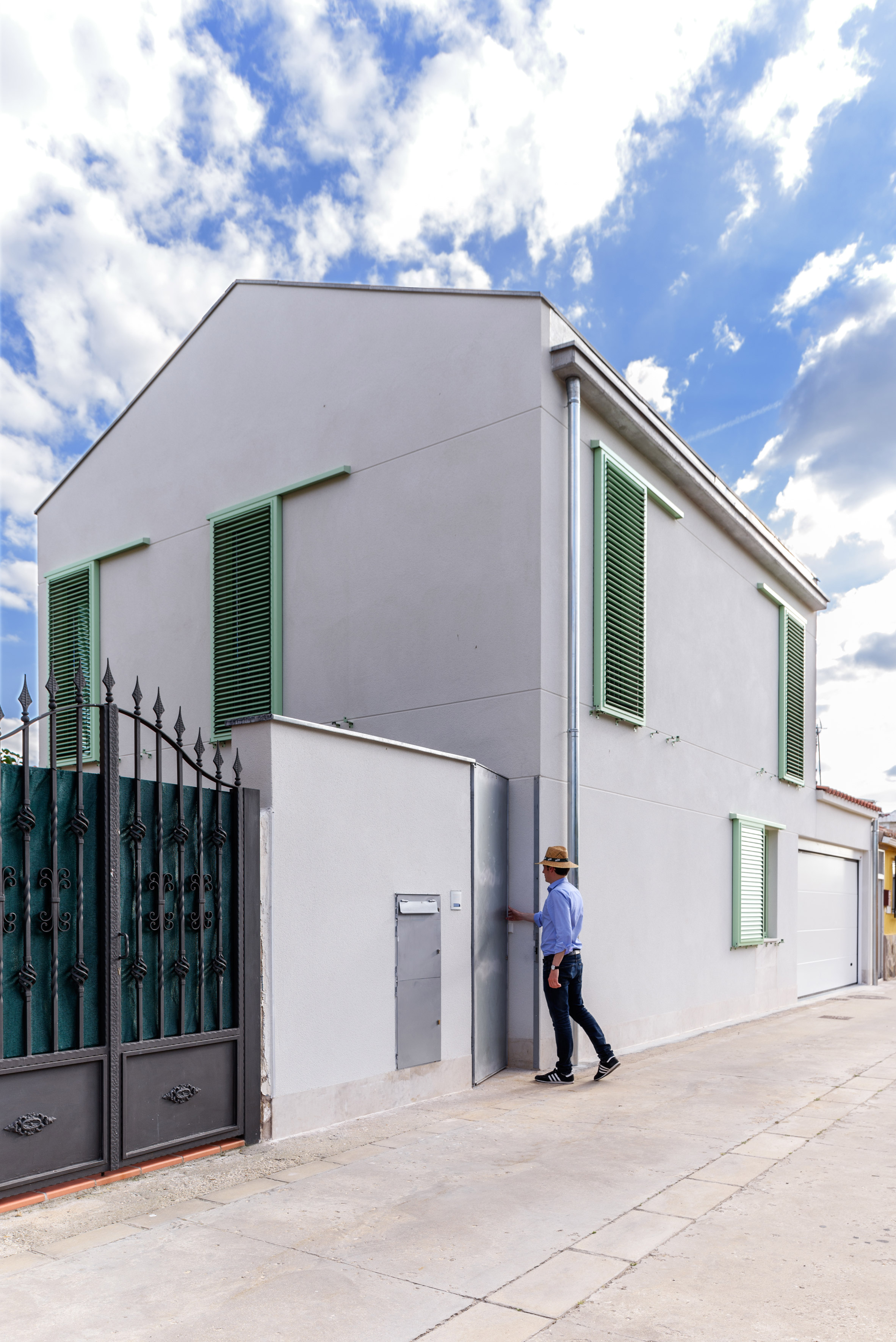 The mint-green shutters, white walls and red tiled roof of this house and studio by Gaztelu Jerez Arquitectos reference the 1940s home it replaces near the Spanish city of Burgos.

When local studio Gaztelu Jerez Arquitectos was asked to draw up plans to replace the deteriorating house, the architects wanted to ensure the new home fitted in with its surroundings.

While concrete structures are more common in the area, they decided to used metal framework that allowed the house to be built in its entirety in just eight months.

The underside of the metal floor plates are left exposed across the interior, but the architects used more traditional materials to mask its contemporary construction techniques from the outside.

The outer walls are whitewashed, a patio surrounded by limestone wainscotting and the roof covered in red tiles.

“Nowadays the district is very deteriorated, given that many new houses have been built without any link nor sensitivity to the pre-existence,” explained the architects.

“Beyond giving a specific answer to a particular problem, the project proposes a possible solution for future interventions at this district, trying to coordinate new construction with respect for original architecture and urbanism,” they added.

“The project assumes some principles from traditional architecture to adapt them to the present. This way, the old and the new establish a dialogue based on logic, naturalness and tolerance.”

Local planning regulations demanded the house be attached to its neighbour, an issue the architects got around by splitting the living spaces across two blocks and linking them with a garage.

A small patio is enclosed between the two gabled blocks and connects all the spaces set around it.

One of the spaces – a printing and carpentry studio – is set in the base of a two-storey block containing bedrooms on its upper floor.

The patio links the workspace with the living area set in the single-storey block it is affixed to.

From the bedroom floor of PI House, which takes its name from the clients’ initials, the residents can take in views of Arlanzón’s wooded riverbank over the roof of the smaller living space.

The project was photographed by Javier Bravo during a hot summer afternoon, and features the architects dressed in straw hats.

“For us, photoshoots are another part of the long process that involves a project, as well as a good occasion to enjoy and have a good time with friends,” architect Enrique Jerez told Dezeen, who posed for the photographs alongside photographer Javier Bravo and fellow architect Jesús Alonso.

“On this occasion, and given that the house has some Mediterranean and vernacular features, we thought that it could be interesting to use that straw hats to set some scenes,” he added.

Photography is by Javier Bravo.