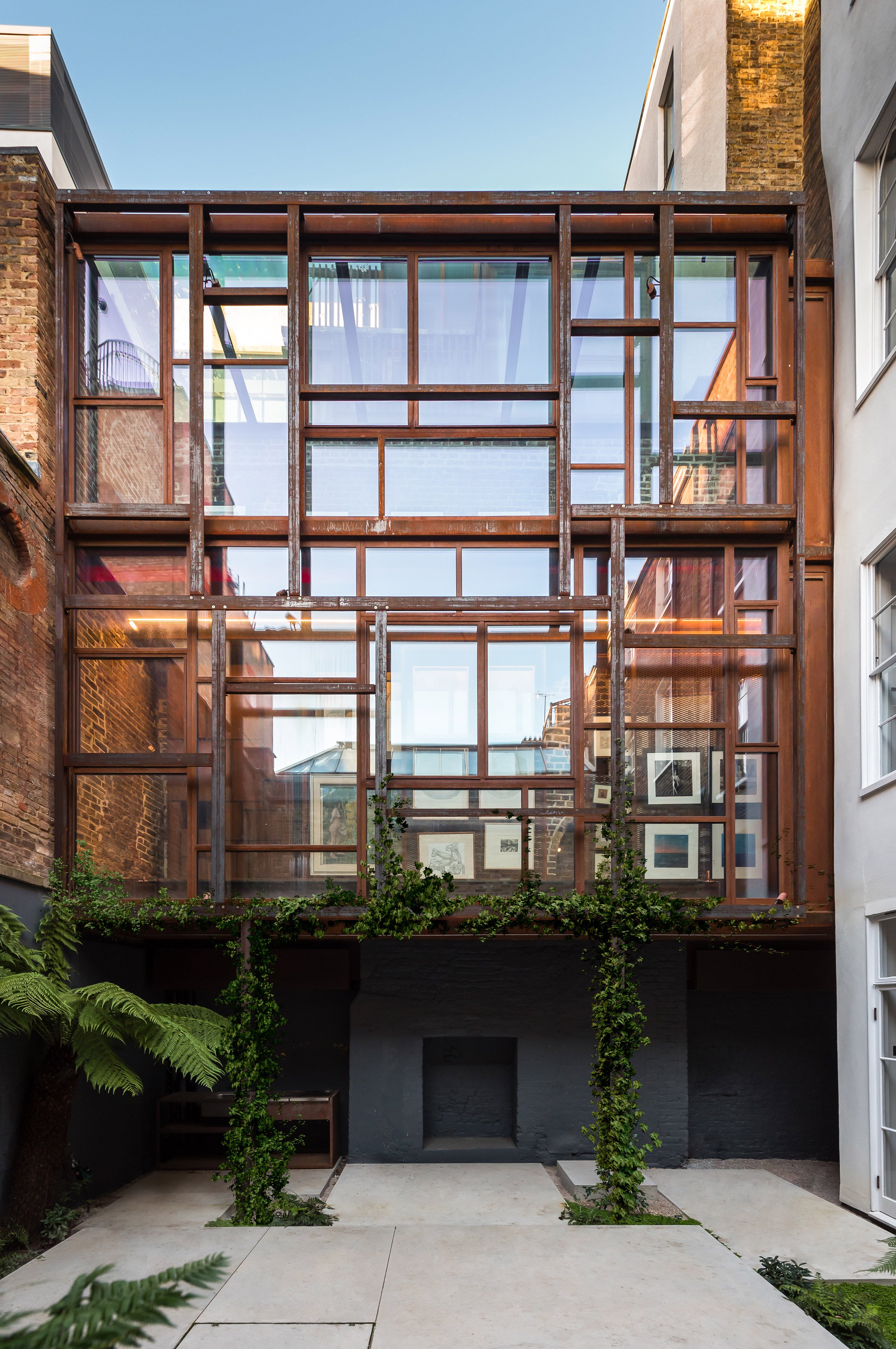 Rust-toned frames cover the facade of this extension to a central London home, which Gianni Botsford Architects designed to house its owner’s private collection of photographs, prints and lithographs.

The client’s need for storage evolved into the design of a gallery added to the rear wall of the Grade II-listed five-storey home, which forms a connection with the outside.

“The aim of client and architect has been to create an enclosed courtyard structure that provides a retreat and place to contemplate art,” said the London-based studio.

“This has been achieved by adding a new elevation to the building both substantial and sufficiently light to bring life into what is now a garden-like inner court.”

The Layered Gallery is made up of a sequence of screens, forming a lattice-like elevation that extends out over the brick wall of the house and into the garden.

The outer screen is made of rusty coloured Corten, and supported by two load-bearing columns disguised by creeper plants – while the second is a UV-treated glazed screen framed by the same pre-weathered steel.

Weathering steel was chosen for its ability to evoke “the notion of ageing” as it rusts over time, therefore alluding to a temporary structure.

Openings within the two outer screens are designed to challenge the hermetic effects present in most art galleries, creating a dialogue between interior and the garden.

Inside, a further layer is added where a series of red blinds work alongside the glazing to protect the artwork, which is mounted on movable Corten screens.

Teamed with a glazed roof, these perforated screens sit against the backdrop of the building’s irregular brick wall, a feature left exposed to enhance the feeling of being both inside and outside.

The architects made use of the unevenness of this exposed brickwork to create pockets of storage throughout the gallery.

Storage is also incorporated on the ground floor within a bespoke Corten cabinet designed by the architects, which also conceals a folding toilet. Panels are arranged in the same collaged pattern as the extension’s frame-covered facade.

“A homage to the traditional outside lavatory, or a play, perhaps on Duchamp’s Fountain, this gesture adds a sense of surprise and transformation,” added the architects.

Corten steel is the only trademarked material to make it into the top 100 of Dezeen’s Hot List. Examples of its use that have proved popular include an extension to an 18th-century Belgian farmhouse and a Holocaust memorial in Bologna.

Stern McCafferty Architects also recently used the material in a similar project, cladding an extension to a country home in Massachusetts that was transformed to host an art gallery.