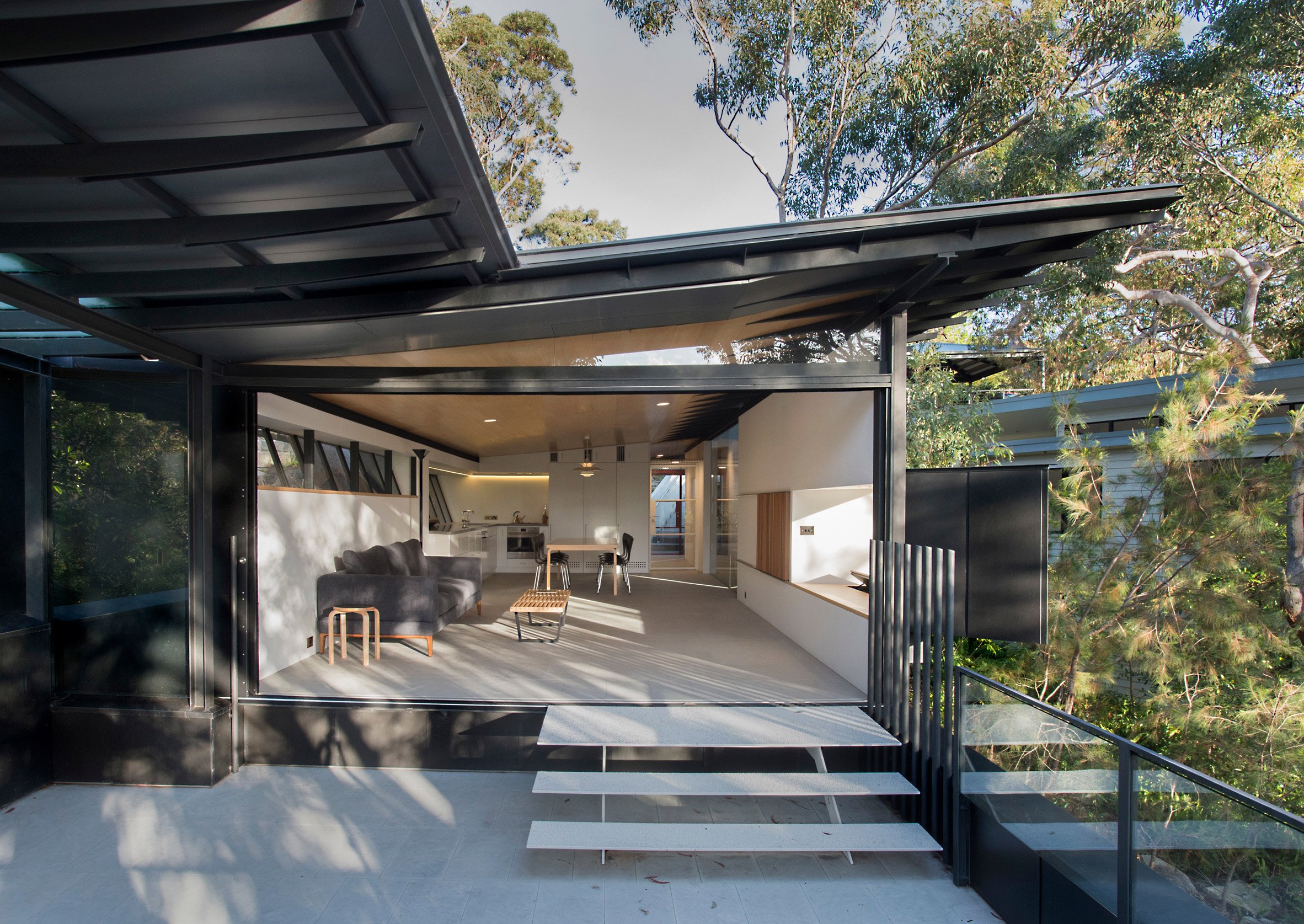 Set in a patch of dense coastal bushland on the Palm Beach peninsula just north of Sydney, this weekend residence by architect Glenn Murcutt is armoured in blackened zinc panels to defend it from wildfire.

Nestled into the base of a sandstone outcrop, the two-storey house is surrounded by shrubbery and a forest of gum, oak and blueberry ash trees.

The building has been angled to preserve as many of these trees as possible – the trunk of once specimen even extends through a gap left in the roof structure for it – and its windows project outwards in places to frame the best views.

It took a decade for the project, which completed in September 2016, to reach fruition. Murcutt was originally approached by the clients while they were living in London and planning their move back to Australia.

They commissioned Donaldson House as a holiday home for themselves and their three children, with the view to eventually settling there full time.

The two-storey home has the same stature at the sandstone outcrop, and as a result is almost imperceivable from the street that runs past it.

A flight of concrete steps leads down from a double parking space on the street, past a store room and outdoors shower to the upper storey, which has a mono-pitched roof that sits level with the top of the rock.

The master bedroom and its en suite are located directly off the entrance hall, and a large sliding window by the bed looks towards the rockface and a pool of water that is protected by a tilted glass roof.

Farthest away from the street, a combined kitchen, dining and living space link with a veranda that provides views down to a nearby waterway through the woodland.

Three further bedrooms for the family’s three children are set on the lower floor alongside a bathroom and laundry room with an adjacent drying deck.

All of the circulation areas are set on the southern side of the house, allowing the bedrooms and living spaces to take advantage of the sunlight to the north.

A row of angled windows floods the open-planning living area with natural light, and frames from the exterior a view of a brightly coloured tapestry by the French-Hungarian artist Victor Vasarely.

While the exterior is covered in inky black cladding, the interior is finished with a subdued palette of white paintwork, hoop pine ceilings and concrete floors.

The blackened zinc cladding was selected in part for the property’s location in an area at high risk of wildfires. To meet stringent regulations, the house stands on reinforced concrete foundations, and its plywood walls are covered by the metal skin.

Windows are made from toughened mesh-covered glass, and set in steel and anodized aluminum frames to protect against embers.

Murcutt is known for his particular attention to climatic conditions and sensitivity to landscape, and the design for Donaldson House responds directly to the unique site demands with a number of sustainability features.

Electrically operated louvers are installed in lieu of air conditioning to help keep the house shaded from the heat of the sun, while hot water is solar generated. Water storage tanks located beneath the master suite serve the bathrooms and laundry, and in the event of fire can be used to sluice flames.

Murcutt, 81, was born in London but grew up in Papua New Guinea before moving to Sydney as a teenager. He set up his practice in 1969 and has gone on to become one of the industry’s most decorated architects, winning the Gold Medal of the Royal Australian Institute of Architects in 1992, the Alvar Aalto Medal in 1992, the Pritzker Prize for Architects in 2002.

He is due to complete work on another decade-long project later this year – the Australian Islamic Centre in Melbourne. Rows of lantern-like skylights were shown covering the roof of the building when first images surfaced last year.

Donaldson House is currently for sale by expressions of interest through the Australian estate agent Modern House, and has a guide price of AU$ 4.1 million (£2.5 million).

Photography is by Anthony Browell.

The post Glenn Murcutt covers bushland home in zinc panels to protect it against wildfire appeared first on Dezeen.