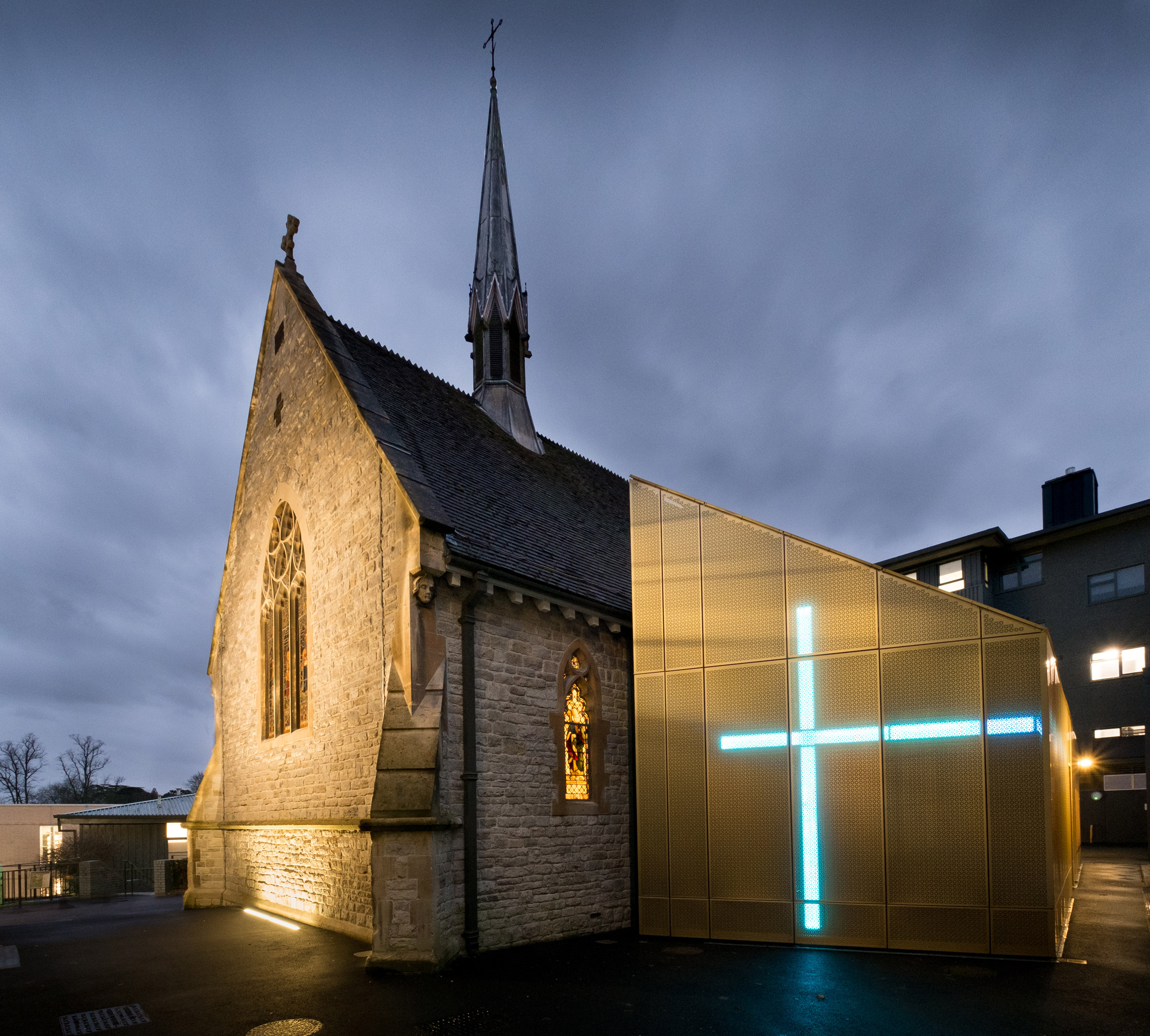 The gothic-revival chapel at the University of Winchester, England, has been “returned to its former glory”, following a renovation and extension by local architecture studio Design Engine.

Design Engine carried out a complete restoration of Winton Chapel, which was originally built in 1880 in the Hampshire town, and today serves as a venue for events ranging from religious services to music performances.

The studio also added an extension on the side of the building, to create a small side chapel and a social space.

“The brief was to create a very special project, to sit as a small ‘jewel’ in the heart of the campus,” said the architects.

The extension was added to the north side of the old chapel. It is clad in aluminium panels, which are anodised to give them a highly reflective gold finish.

They are perforated to allow light to filter inside, but also to allow the structure to glow by night – a tactic that has also been employed recently for a Parisian community centre and a public toilet in London.

Despite its contemporary appearance, the extension does have some things in common with the old chapel. Its pitched roof follows the angle of its neighbour, and its asymmetric structure is made from wooden beams.

“The resulting design is an empathetic response to the gothic-revival building, where its connection, form and materiality seem both intuitive and exciting,” said the architects.

“The form lent itself to a timber frame structure – a series of primary wall and roof trusses, each one different to create the changing form.”

The restoration project involved reviving the chapel’s original wall and ceiling finishes, as well as adding new features including contemporary lighting, and oak and stone floors.

Materials were selected to reference the heritage of the Christian faith. For instance, Purbeck limestone – a material often found in places of worship – was selected for a number of new elements.

The new altar is made from seven horizontal sections of the material, which is also a reference to the number that Christians usually associate with perfection. It was also chosen for the plinth that the chapel basin sits on.

Made from stainless steel, this font is intended to represent “light of the world”.

The architects also worked with Luke Hughes to design a number of bespoke furniture pieces for the space, including the oak pews, lectern, storage units and tables.

“The finished building is, quite literally, a jewel within the campus; a place for prayer and quiet contemplation, but also a place where one can be both moved and inspired,” added Richard Webster, project manager at the University of Winchester.

Photography is by Jim Stephenson.