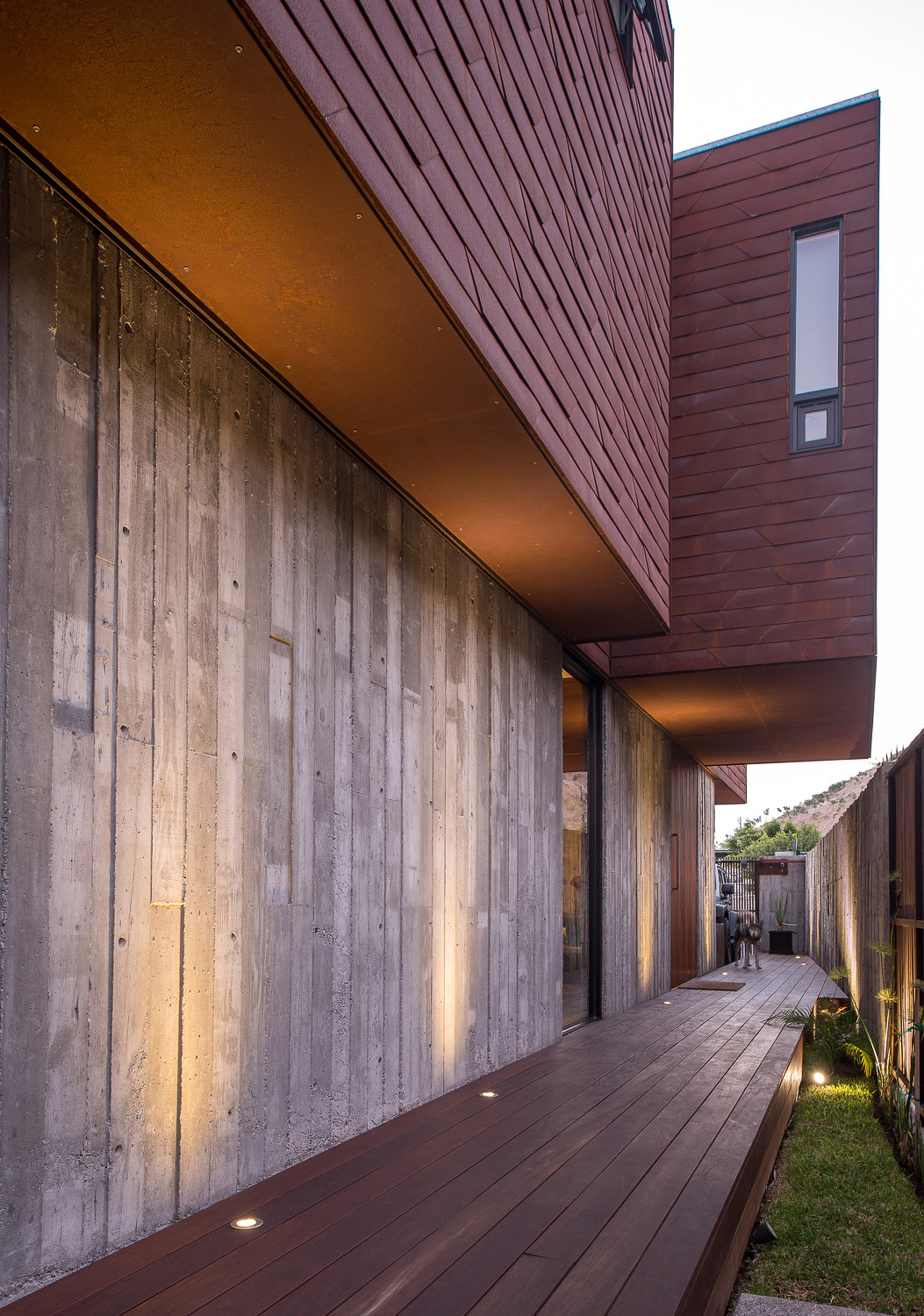 Mexican-American firm Gracia Studio has completed a single-family home in the city of Tijuana that comprises a weathering-steel volume perched atop a monolithic concrete ground floor.

The four-bedroom Casa GS is located only a few kilometres from the US border. The ground floor of the 290-square-foot (30-square-metre) home was built using board-formed concrete.

The material was cast into formwork made with repurposed wood from the city’s many manufacturing facilities. The scraps salvaged from packaging give the concrete a rough texture, which contrasts the upper volume’s steel cladding.

Because of the area’s high level of seismic activity, the firm needed to take precautions to ensure the building’s stability. Therefore the foundation, mezzanine and deck slab are made of post-tensioned concrete, which avoids structural damage in case the land’s surface shifts.

This technology employs steel cables housed in a plastic tube, which runs through the concrete as it is cast. Once set, the cables are pulled taut, which makes the concrete stiffer than it would be using typical steel reinforcements.

The entrance to the residence is located to the side of the property, away from the two-car driveway. A floating concrete staircase begins at the foyer, marking an informal lobby.

The ground floor contains the kitchen, and an open-plan living and dining room, which leads to a patio outside. “The back of the house is bounded by a vacant lot connected to the patio, integrating it to its context,” according to the firm.

Upstairs, three bedrooms are positioned on either side of an open central space that serves as a secondary living room. Two are located at the northern end of the longitudinal volume, while the master bedroom occupies the southern area.

This upper storey is clad in steel shingles. “The facade was designed with sheet metal which was pre-cut at the factory and mounted on site, thus providing a unique and inexpensive cladding,” said Gracia.

To contrast the exterior materials’ rough texture, many of the interior surfaces were finished in wood.

“Exploring processes that are uncommon for single-family housing results in a project that responds both structurally and functionally to the client’s needs,” explained the architect, who completed the home in 2013.

Other residential projects in Mexico include a rammed-earth desert cottage and a brick house that is partially elevated above a structure of steel beams and bearing stone walls.

Photography is by Ian Patzke.

The post Gracia Studio lifts steel-box house in Tijuana on a concrete base appeared first on Dezeen.