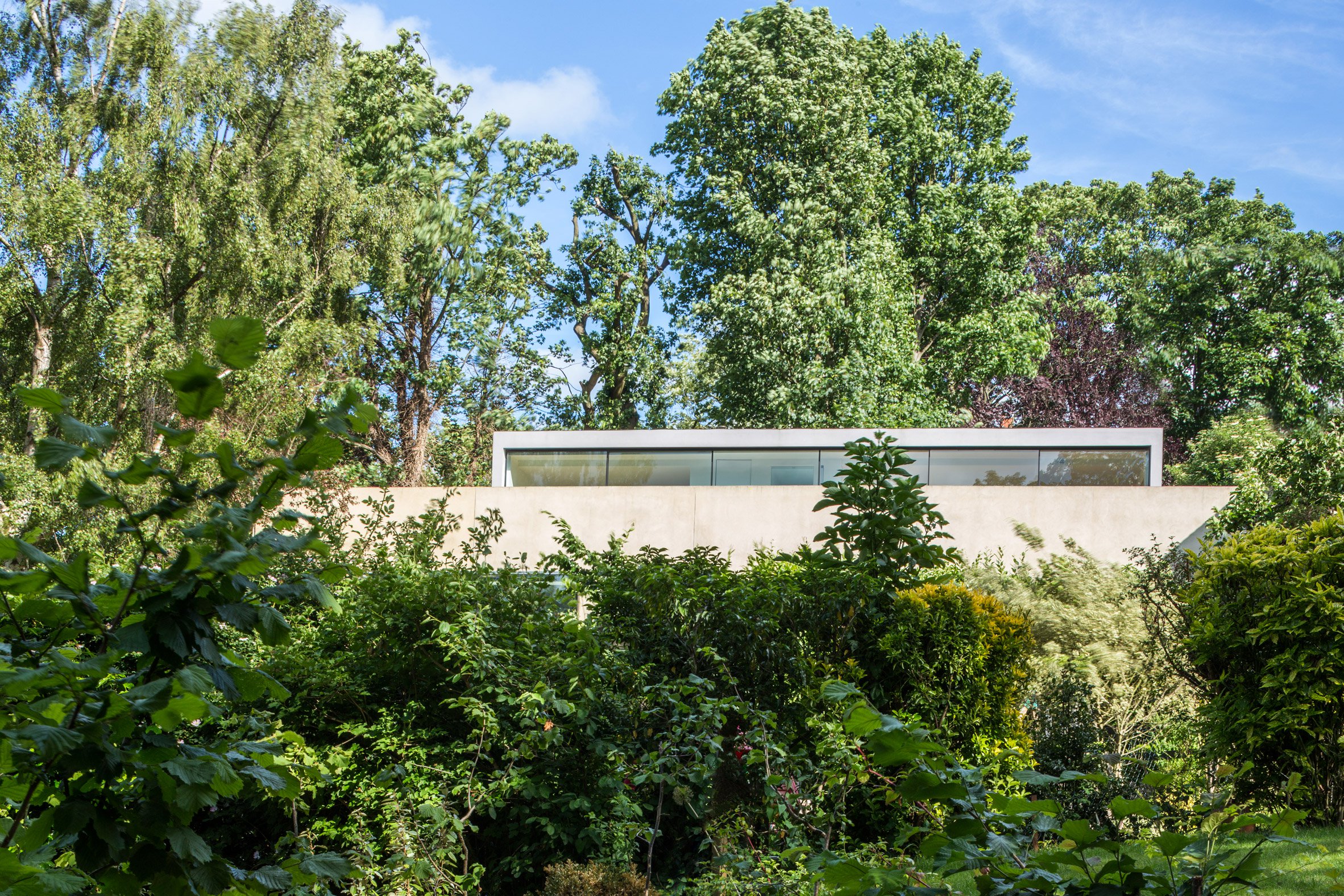 British firm Guard Tillman Pollock punched a hole through a detached Edwardian property in north London to create a driveway leading to this modernist-inspired house that faces onto a secluded garden.

The existing house is situated on a landlocked site at the end of a terrace in Highgate, north London. Its previous owners had also purchased an adjacent piece of land that could only be accessed through a narrow gate between the house and the terrace.

Guard Tillman Pollock was tasked with creating a larger house on the awkwardly shaped plot that provides an improved connection to the garden and views towards the nearby woodland and London skyline.

Attempts to purchase a strip of land from one of the neighbours to create a new entrance were unsuccessful, so the living room on the ground floor of the two-storey house was removed to make way for an opening that accommodates a curving driveway.

“Demolishing the existing house to create space for a driveway seemed heavy handed and would not have been a sustainable solution to the problem,” said the architects.

“It was decided that the best solution was to reconfigure the existing house as a gatehouse and create a driveway passing through it to a new house in the landlocked garden.”

The interior of the existing building was reconfigured and a previously unused attic is now utilised so the overall internal area remains much the same as previously.

Bedrooms are accommodated on the ground, first and second floors, with a living space and kitchen moved to the first floor.

The new driveway sweeps down a slope from the street, through the gatehouse and around to the right to reach a courtyard on the first-floor level of the new house.

The courtyard is flanked by solid walls with no windows. One of the walls supports a large volume containing the master bedroom that extends over the driveway and is propped up at its end by a concrete pillar.

Below the courtyard are a pair of bedrooms connected by a corridor to an open kitchen and dining area that looks out onto the garden through full-height sliding glass doors.

The volume containing the reception area at the courtyard level and two bedrooms above is set back from the garden-facing elevation to accommodate a terrace lining the upper floor.

Incorporated into the floor of the terrace at one end is a roof light that allows natural illumination to flood down through a double-height void linking the reception room with the dining area.

The floor at the other end of the terrace is made from metal mesh that enables light to penetrate to a covered area outside the ground-floor bedrooms.

As with the living spaces and bedrooms on the lower floor, the top-floor bedrooms are also flanked by sliding doors that ensure optimal views towards the woodland surroundings.

A slot window incorporated into the wall of the reception space frames a specific view of the trees. The glazing projects out from the facade so the window frame is concealed and the interior feels more connected with the outdoors.

The building is finished in a smooth grey render with dark window frames that lend it a distinctly modernist feel, influenced by local residential projects such as John Winter‘s 1967 private home and Berthold Lubetkin’s Highgate development.

Guard Tillman Pollock’s other modernist-influenced projects in London include a home for an artist featuring a crisp white facade incorporating a painted fabric screen, and a narrow extension featuring vertical slices of glazing.

Photography is by Gareth Gardner.