Hadid, Holl and Gehry join fight to save “masterpiece” school by Helmut Richter 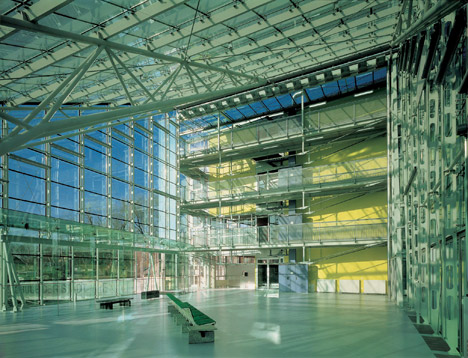 News: Zaha Hadid, Steven Holl, Frank Gehry and Bernand Tschumi have pledged support to a campaign to prevent the “barbaric” part-demolition of a school by Austrian Modernist architect Helmut Richter.

French architect Dominique Perrault, MAD principal Ma Yansong, historian Kenneth Frampton and Coop Himmelb(l)au founder Wolf D Prix have also put their weight behind the campaign. It seeks to protect the legacy of the late Austrian architect by preserving what is thought by many to be his most important building – the Science Secondary School at Kinkplatz in Vienna.

Helmut Richter, who died earlier this year, completed the steel-framed school building in 1994. Characterised by blue-glass walls, it features a pair of wing-like volumes that frame a lofty gymnasium, plus a series of classrooms with exposed concrete ceilings and industrial detailing.

According to the Helmut Richter Committee, an organisation set up by Austrian designer Peter Noever, the future of Richter’s “masterpiece” is threatened by a planned conversion that could see part of the glass structure razed.

“Helmut Richter’s architecture has proved to be groundbreaking and has had a lasting effect through the work of his various students,” reads a statement from the committee.

“For modern architecture in Austria it is essential that the destruction of this central work by Helmut Richter should be prevented.”

According to architect and supporter Peter Ebner, Richter’s unique skill was an ability to combine Austrian architectural qualities with international influences.

“We must save this type of school by Helmut Richter to show young architecture students a possible way to grow in an architecture of high quality,” said the Technical University of Graz lecturer.

“Beauty is a rare phenomenon, it should be preserved for next generations,” added Berlin-based architect Zvi Hecker, who has also offered his backing.

The pledge reads: “I trust that Helmut Richter’s legacy and memory will be preserved by the responsible authorities according to the highest standards. And I would like to unequivocally state my opposition to the legacy of Helmut Richter being in any way impaired or disfigured, or even demolished and replaced by new buildings. With this, I also give my consent for this petition, which I herby sign, to be made public by the Helmut Richter Committee.”

At time of publishing the online petition had attracted just over a hundred signatories.

Main image by Rupert Steiner, other images by Manfred Seidl.

The post Hadid, Holl and Gehry join fight to save
“masterpiece” school by Helmut Richter appeared first on Dezeen.