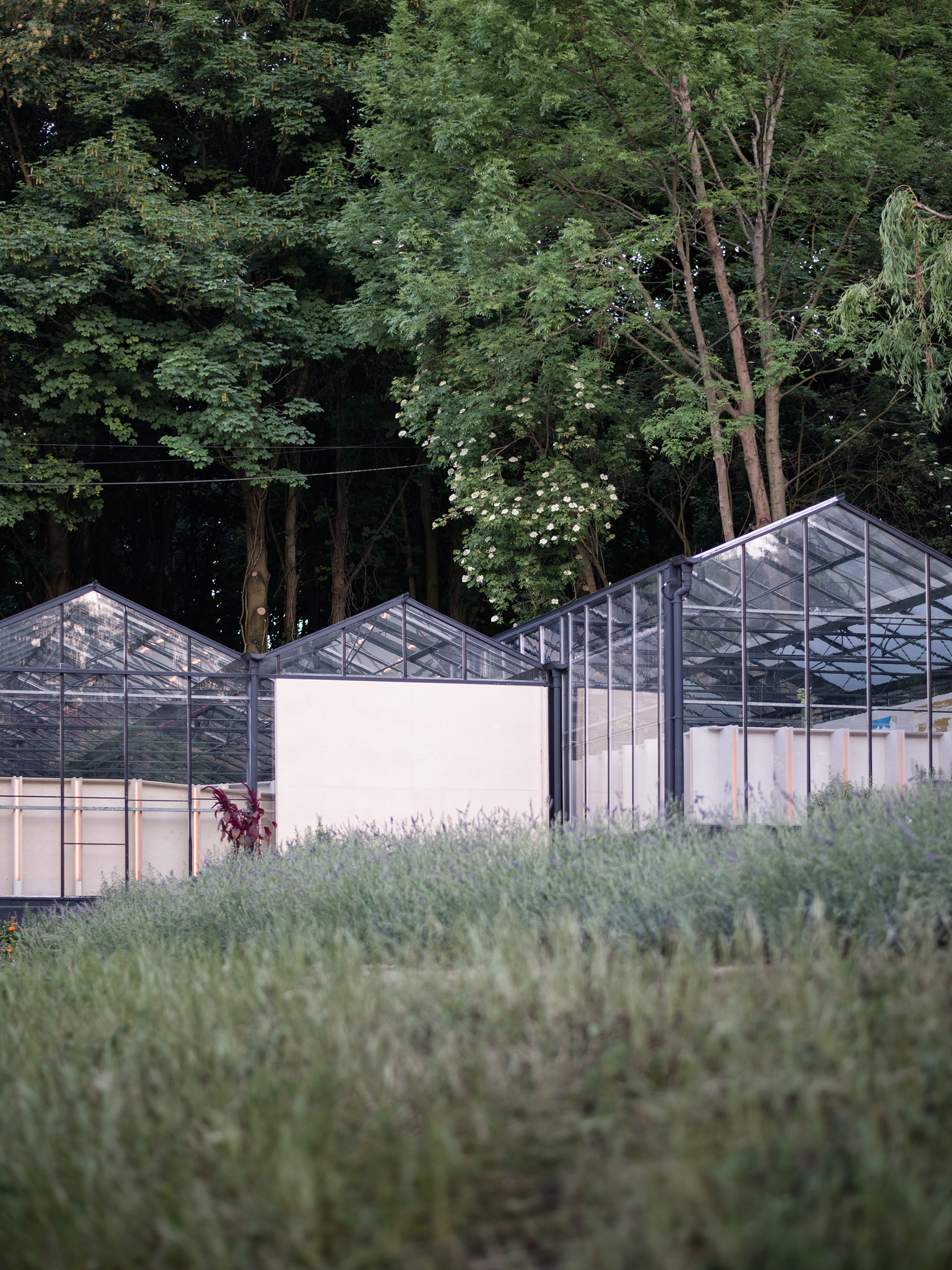 Birch plywood panels form partitions, platforms and furniture inside these greenhouses at a former garden centre in Highgate, north London, converted into an events and exhibition space by local practice HASA Architects.

The six glasshouses, which terrace down the gently sloping site, once formed part of the Capital Gardens garden centre in Highgate Bowl. It was bought by developer Omved International with the view to convert the site into luxury homes, but locals protested and the council later rejected the plans.

Several years later, HASA Architects was brought on board to transform the derelict horticultural buildings into a 320-square-metre events space to be programmed by Omved Gardens, which now runs the site as a community garden.

“It is designed to have a 10-year life span,” studio co-founder Mark Stevens told Dezeen. “It was an open brief with concept of rebirth, reuse, rejuvenate.”

“The project, inspired by the frame and construction of the original building, explores the possibilities of this forgotten piece of the city by bringing it back into use through a series of small-scale interventions,” added the studio in a statement.

Birch plywood panels finished in white Osmo oil are used to form platforms, joinery and walls for the space, as well as sliding doors, while the original metal frames and glazing of the structures have been restored.

The plywood, in part, acts to ensure distance is kept between visitors and the fragile glazing. Low-level walls surround the perimeter of each of the structures, joining floors made from the same material.

“The design’s plywood skin creates a folded landscape that is inspired by the original structure’s frame and panel construction,” said the team, which is headed up by Stevens and co-founder Charlotte Harris.

“The use of one material throughout creates continuity and reinforces the connection between each bay, while the light tone of the plywood finish offers a subtle contrast against the glasshouse and the landscape,” they added.

“To provide contrast, the application of a dark finish is applied to the existing structure creating a distinction between old and new.”

The project took six weeks to complete and was finished in May this year, in time for the opening of the Chelsea Flower Show.

The plywood elements were fabricated off-site using computer numerically controlled (CNC) cutting services, and assembled on-site over 10 days. Once in-situ white Osmo oil was applied to the panels to create a uniform appearance and provide protection.

Protective film was also applied to the glass structure, which was restored as part of the conversion process.

An exhibition currently on show at the V&A museum in London looks at the social history of plywood.

The versatile material has seen a resurgence in contemporary interior design – it’s recently been used to line a pair of bedrooms in a London loft conversion and create dark blue shutters for a suite of apartments in Porto – but is increasingly creeping into architectural structures too.

Following the exhibition, we looked at 10 of its most ground-breaking uses, ranging from a robot-sewn pavilion to a kindergarten with a dramatically undulating roof.