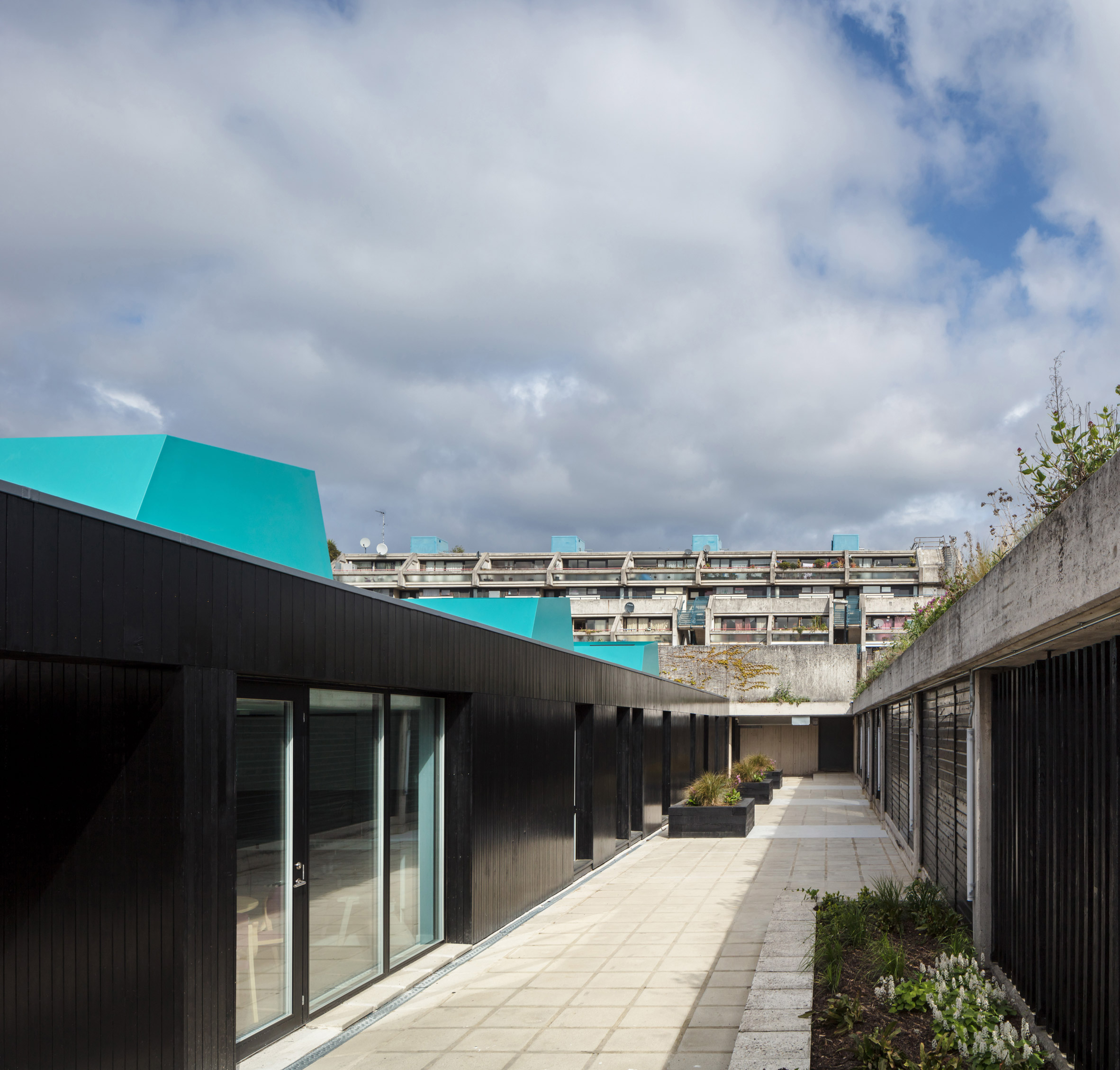 British architecture studio Haverstock has added new facilities to a school on the historic Alexandra Road Estate in London‘s Camden, built by architect Neave Brown in the 1970s.

The Camden-based studio added new therapy rooms and short-stay accommodation for up to 50 young people with autism and learning difficulties to the Jack Taylor School, which first opened in 1978 at the celebrated modernist estate.

The two new buildings, named Alexandra College, are arranged around a series of internal courtyards, with turquoise raised geometric-shaped skylights lining the roofs of their new, black-painted timber structures.

The same colour is used to demarcate the basketball court, complementing the blue colour of the original handrails that run along the terraces of the estate.

“We developed a use of colours within the existing building to promote a greater independence when navigating the building,” project architect Gavin Stokes told Dezeen.

“The existing building provides great levels of natural light and this is something we really pushed for in the new build – lots of breakout spaces are provided, including many external break out spaces.”

The Jack Taylor School was originally known as the Alexandra Priory School, but was renamed in 1991, at the same time it changed to cater specifically to children with special education needs.

It is one of several concrete slab buildings that form the Alexandra Road Estate, which has become one of London’s most important examples of modernist architecture, and one of the best-known works of American-born architect Brown.

Brown was aware of Haverstock’s plans for a new building on the heritage-listed site, and did not agree with the design.

“Neave has been very vocal in obtaining listed status for his buildings and would rather they were not tainted by additions or adjustments,” said Stokes. “Unfortunately, as is the case with a building like the former Jack Taylor school, without considerable updates and improvements they would become neglected relics.”

Short-break accommodation is particularly underfunded in Camden, and the council spends “a good deal of money” allowing residents to travel to other boroughs to receive specialist education, according to Stokes.

This led to a complex brief, with numerous restrictions and requirements, that could not be satisfied by any of the alternatives suggested by Neave.

“Neave wasn’t aware of the complex brief developing for the provision and he had no interest in engaging with it,” said Stokes. “He had a very strong view about where a new building should be located on the site, in terms of his design proposal it was outdated and would not have been suitable for the complex needs of the building users. Neave did not have an understanding of the brief or the users and his suggestions reflected this.”

Both of the therapy centre’s two new buildings are single-storey structures, constructed out of prefabricated timber panels. These are designed to meet the PassivHaus standards of sustainability.

“Our response to the complex brief and the listed nature of the building is to retain as much of the existing as possible while introducing elements of new build where necessary,” said the architects. “Other repairs and alterations intend to return areas of the building to its original design – to unpick poor quality adaptations and modifications since its original opening.”

In one building, the short-stay living accommodation combines a “more autonomous” self-contained bedroom flat, with the larger block containing six more bedrooms. The architects’ response required an adaptable approach as many of the users’ needs will be varied and are not yet known.

Together with the renovation of the school and the two new therapy and residential spaces, a glazed corridor spans the courtyard, dividing the two wings of the existing structures and the new buildings.

“Designing for every possibility is difficult but there are some common approaches that can be applied – circulation routes are made as large as possible and as clear as possible, and building elements are extremely robust,” added Stokes.

Haverstock has built the college to be used all year round, as courses run longer than the usual academic year and learners are actively involved within the community.

Alexandra College joins other extensions to modernist buildings in London, including a timber-framed addition to Robert Bailie’s 1960s housing estate also in Camden by Maccreanor Lavington, and a plywood-clad circulation tower and an elevated terrace that was added to this brick maisonette in Primrose Hill by Studio Gill.