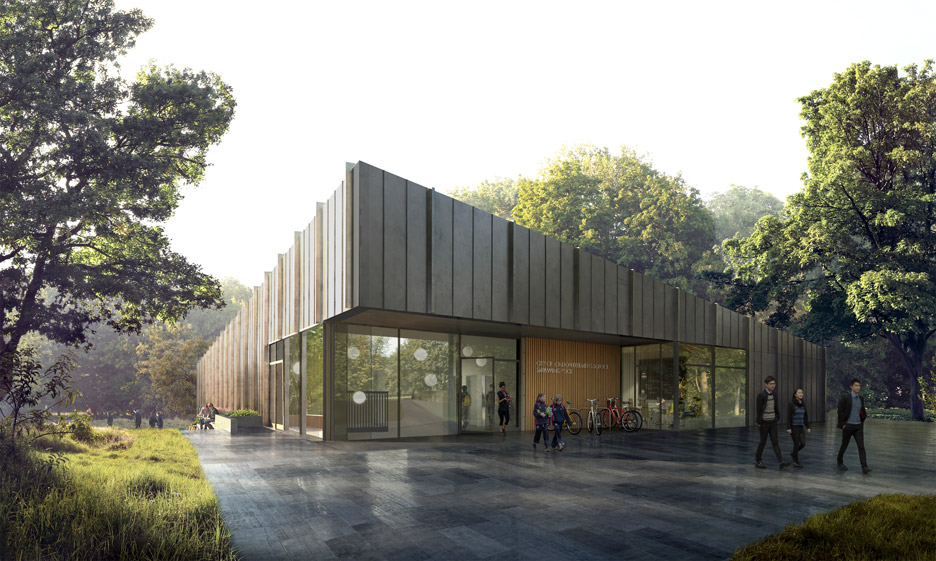 A cross-laminated timber roof covers this six-lane swimming pool, which London firm HawkinsBrown plans to add to a school in Surrey (+ slideshow).

The 25-metre pool is the second phase of the masterplan developed by HawkinsBrown’s for the City of London Freemen’s School, which has already seen the completion of a new boarding house and music school.

It replaces the school’s original pool building, which was destroyed following a fire in 2014, and relocates it from the west to the east side of the campus next to the existing sporting facilities.

CLT is an engineered wood formed by glueing together several layers of lumber at right angles to each other, making it much stronger and more rigid than normal wood. HawkinsBrown previously used the material to create a “record breaking” apartment block in London’s Shoreditch.

A pitched roof running diagonally across the rectangular plan of the building is intended to blend in with its woodland surroundings.

This diagonal ridge is visible through the interior of the pool hall, and is punctuated by a series of the glulam beams.

The highest point of the roof highlights the entrance, which is visible through an entirely glazed facade.

“Our design for the City of London Freemen’s School’s new pool sits gently within the wooded landscape of the school grounds,” said Hawkins/Brown associate Adam Cossey. “The deep columns of the all-timber construction and wraparound glazing, which gives direct views from the water into woodland, will give the sense of swimming amongst the trees.”

“The all-timber construction has a number of advantages in dealing with the challenges of a pool environment – it’s resilient, waterproof and environmentally sound,” he added. “It also provides a beautiful, natural surface that creates a special environment to swim in.”

Duggan Morris Architects similarly added a timber roof to the interior of a school swimming pool in Buckinghamshire in order to reduce sound reverberation.

In order to minimise disruption caused by construction, the building will be manufactured off-site before being shipped back for assembly.

Hawkins/Brown was shortlisted for the RIBA Stirling Prize in 2013 for its work on the regeneration of Park Hill estate in Sheffield. The firm also created a brightly painted timber extension for the Oily Cart Theatre in south London.

The post HawkinsBrown designs pool that will give the sense of “swimming amongst the trees” appeared first on Dezeen.