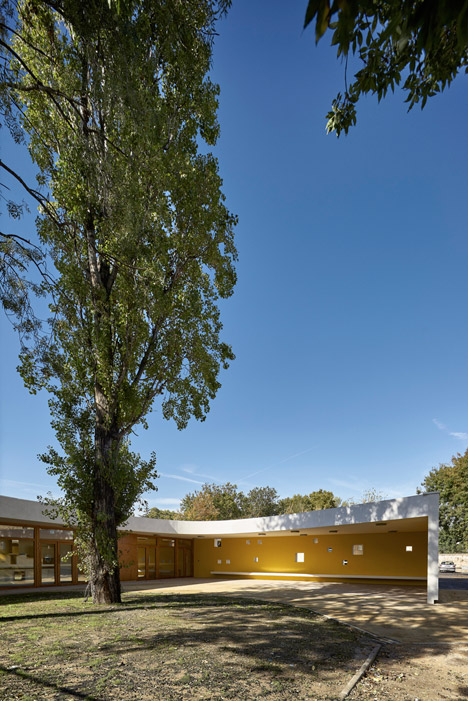 Small square openings are scattered across the facade of this after-school clubhouse in Cannes, France, offering glimpses of the activities taking place within its courtyard playground (+ slideshow).

Designed by French studio Heams & Michel Architectes, Childhouse House provides indoor and outdoor play spaces where children between the ages of six and 12 can take part in cultural and educational activities during afternoons and weekends.

The building is situated beside an old farmhouse and a park in the La Bocca area of Cannes. Architects Nicolas Heams and Benjamin Michel chose to locate the structure in the far north-west corner of the site, meaning the facade also functions as the site’s perimeter walls.

Behind these walls, the 200-square-metre clubhouse is formed of a rectilinear building and a sheltered outdoor play area, which are both covered by a curved roof that frames the outline of a secluded garden courtyard.

The square windows, which have been created in different shapes and sizes, offer the only glimpses of the courtyard from the street.

“The north and west facades are much more closed and express a limit; they serve as a surrounding wall for the site,” explained Heams and Michel. “On the contrary, the wide east front and the covered playground open out onto the park and the vegetation.”

“The curved line of the canopy and of the covered playground’s cantilever responds to components of the landscape, the sky and the trees,” they said.

Beneath the canopy, the perforated walls have been painted a vivid shade of yellow.

The same shade colours the floors inside the two largest rooms of the structure, which have been positioned at opposite ends. The room at the northern end accommodates the club’s main activities, while the southernmost space functions as a cooking workshop and dining room. A kitchen, storeroom and toilets are sandwiched in between.

Where these rooms open out to the courtyard, a series of windows and glass doors are surrounded by timber frames and panels.

“Two objectives guided the building’s construction: characterising the landscape into the project like a little pavilion, and building an inside/outside space suitable for the development of children,” said the architects.

“An impression of serenity emanates from the entire facility and offers children a quality life environment at their scale,” they added.

Photography is by Aldo Amoretti.