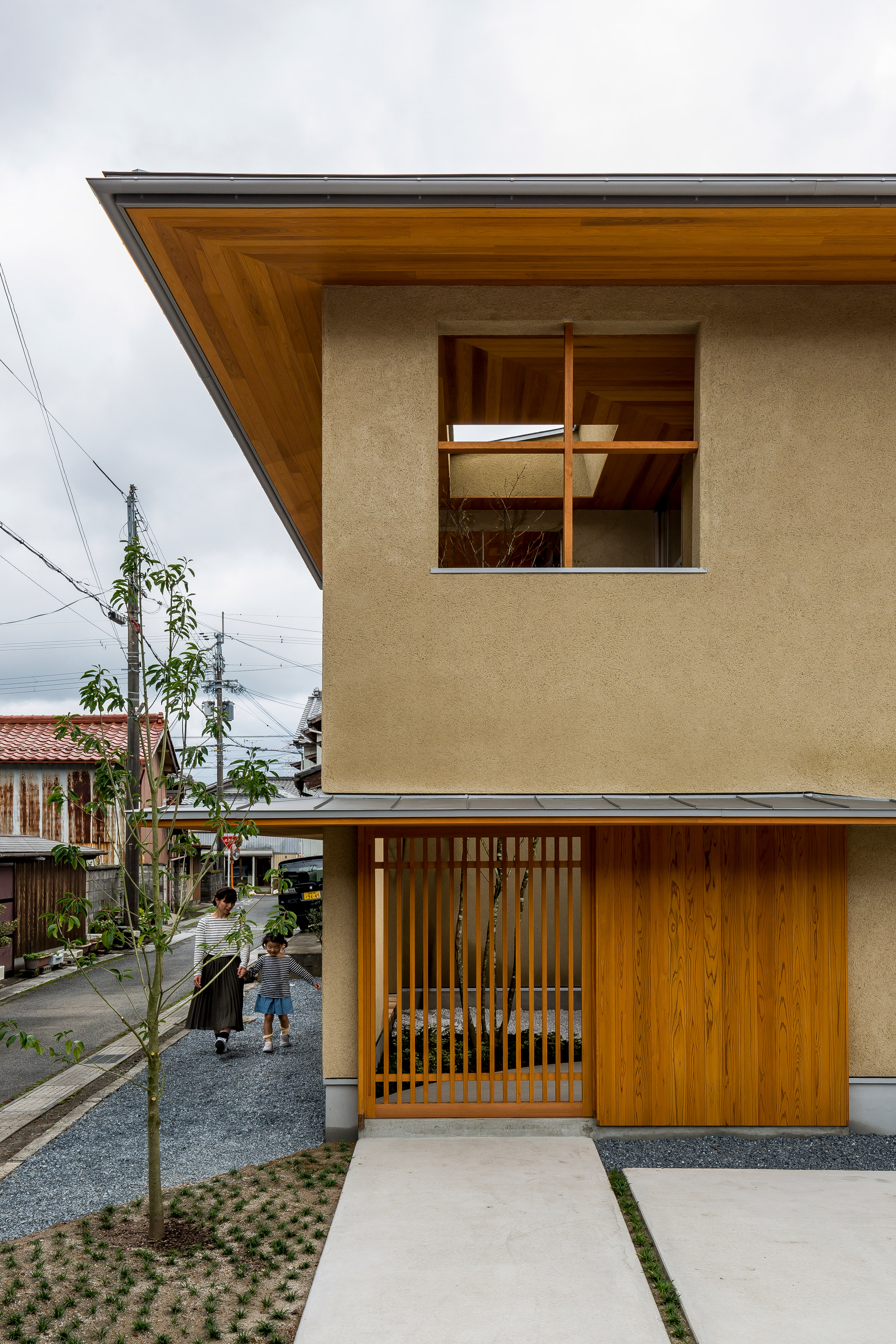 This family house in Japan’s Shiga prefecture was designed by local studio Hearth Architects around an indoor garden, which is planted with a tree that extends towards a skylight.

Kyomachi House is located in Koga, a city in the southern part of the Shiga Prefecture. The residence is set within the former boundary of the town of Minakuchi, which was merged with four other towns in 2004 to create Koga city.

The town dates back to the 14th century, when it was established as one of the station posts along the route from Kyoto to Edo, called the 53 stages of the Tokaido.

Hearth Architects, which is also based within Minakuchi’s old borders, designed the two-storey residence for a plot where two roads merge on the southeastern side.

To make the most of this sunny spot, the architects created a double-height void for an indoor garden.

A skylight in the roof tops the curved patch of soil at the centre of the space, which hosts a variety of plants and the tree, and is flanked on one side by gravel.

The tall rough rendered walls around the garden provide the residents with privacy from the street, with two openings that offer natural ventilation.

One of these is placed at the front of the house and fitted with a gridded screen wooden screen that offers glimpses of the tree from the road. The other, set at the side, hosts a wooden bench, which is sheltered by the overhanging roof that wraps the residence.

The inner walls of the garden are also fitted with openings to offer views from the spaces inside towards the garden and access to daylight.

As the deciduous tree sheds its leaves in the winter it will allow more light into the residence, and when it flourishes in the summer it will offer shade.

“It plays a role as sunshade in leafy summer and as letting the sunshine in non-leafy winter,” said the studio. “The clients can enjoy the change of the seasons and time through the symbolic tree.”

“There is a symbolic deciduous tree in the inner garden, which is visible from anywhere inside.”

One of these openings includes a sliding glass door that connects the garden to the family dining room, where wooden flooring mimics the wood-lined ceiling.

The kitchen is set to the rear of the space, with a set of steps that lead to the white-painted lounge. There is a narrow clerestory window in this room and a window to street with a ledge where the owner’s children can sit.

Wooden panels are arranged to create a gridded pattern on the floor, while furnishings include a built-in sofa and storage cabinets.

A staircase lit by a two-storey window cut into the front of the house leads to the first floor, where the two children’s bedrooms overlook the void.

Also on this level, the master bedroom opens onto an indoor balcony overlooking the garden. From the balcony, a second window fronted with a slatted shutters  faces the street.

Other recently completed Japanese residences include a home with a footprint of just 60 square metres and a property made up of a cluster of nine cuboids.

Photography is by Yuta Yamada.