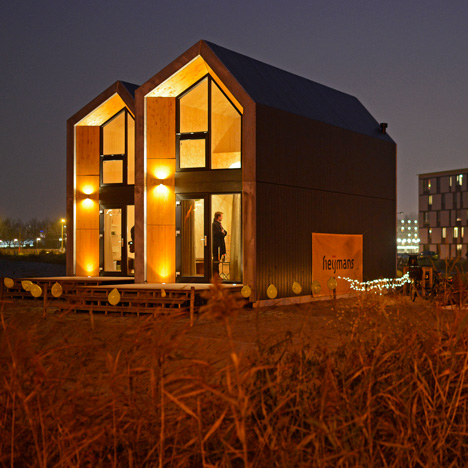 Dutch construction company Heijmans has developed a prefabricated starter home for young professionals that can be installed on vacant city-centre sites in under 24 hours (+ slideshow).

The Heijmans ONE project proposes a solution for two problems – the issue of unattractive urban sites and the shortage of affordable homes for graduates, who often earn too much to qualify for social housing but too little to afford rental prices in cities like Amsterdam.

Related story: KHM26 house by Jos Blom & Tim Piët was transported to site on the back of a boat

“The market for young renters is difficult,” explains developer Anneke Timmerman-Dalhuisen in a movie about the project. “If you want to rent in Amsterdam you usually end up in a 16-square-metre attic room at 700 euros a month, having to fight off 88 other hopefuls.”

The proposed solution is a series of prefabricated wooden homes that can easily be moved from place to place to create homes on empty plots. If a site needs to be cleared for construction at short notice, the house can simply be trucked to a new location.

Heijmans – which also collaborated with Daan Roosegaarde on his Smart Highway project – worked with Tim van der Grinten of Moodworks Architecture to develop the design for the prefabricated house, which accommodates just one occupant.

Each two-storey building features a generous living room, a kitchen, a separate bedroom and a bathroom, as well as an outdoor terrace.

“Most of all, we’ve wanted these homes to inspire a feeling of positivity,” says Van der Grinten in the film. “High ceilings, space, light, a nice view – this project is a step in a new direction, away from permanent immovable properties.”

“The great thing about Heijmans ONE is that it’s a temporary solution whose quality rivals that of permanent housing,” he adds.

The first two prototypes were installed on Zeeburgereiland island in December and the first resident – 28-year old editor Carmen Felix – has already moved into one. The house even came fully furnished by Ikea.
Design concept
Based on the success of these prototypes, Heijmans hopes to launch another 30 by the end of this year. According to the company, there will be 700,000 young professionals in Amsterdam by 2050, so there is plenty of scope for the project to grow.
Exploded diagram – click for larger image
The post Heijmans proposes pop-up homes to solve the problem of high rents appeared first on Dezeen.