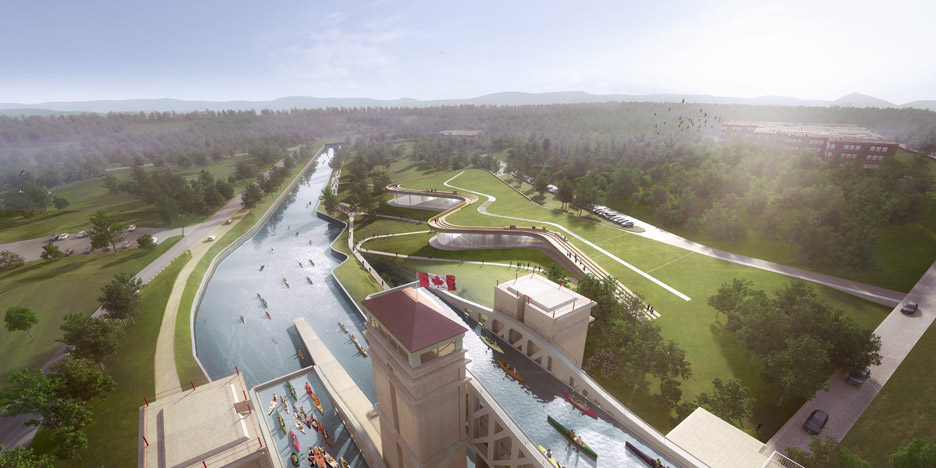 Irish studio Heneghan Peng Architects has unveiled its competition-winning design for the Canadian Canoe Museum in Ontario – a wavy waterside structure with glass walls and a grass roof (+ slideshow).

The Dublin firm worked with Toronto-based Kearns Mancini Architects on the design of the serpentine structure, which will wind along the bank of the Trent-Severn canal.

The €30 million (£15 million) building will occupy the bank of the waterway below the Peterborough Lift Lock, a hydraulic boat lift built in the early 20th century.

The structure will be partially embedded in the ground to protect the world’s largest collection of canoes and kayaks – including a selection of 18th-century birch bark canoes and aboriginal artefacts – from strong sunlight.

Related story: Airbnb hopes for luck of the Irish with pub-like Dublin offices by Heneghan Peng

“The design works organically with the land rather than overwhelming it,” said the firm.”The museum embraces aboriginal wisdom to live and build lightly on the land.”

The 7,500-square-metre structure will also host a restaurant, workshops and event spaces. These spaces will offer views of the water through glazed walls to the south and east.

An undulating parapet made from local hardwood will surround the two-acre green roof, which will feature an edible garden, native flowers and aboriginal planting including corn, beans and squash crops.

“No matter where you are inside the museum or outside standing on its roof, you will always be able to see the water, and a canoe waiting to be paddled by you,” said jury chair Lisa Rochon.

“It’s going to change the way we think about architecture, place making and the canoe – a true icon of design.”

The building will include geothermal heating cooling systems, helping to offset energy consumption and achieve a LEED Gold sustainability certification.

Heneghan Peng is led by architects Róisín Heneghan and Shih-Fu Peng. Past projects by the studio include the Giants’ Causeway visitor centre in Northern Ireland, pub-like offices for Airbnb in Dublin and a campus for the University of Greenwich’s architecture in London.