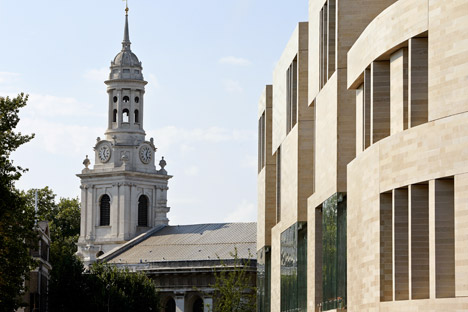 Behind a traditional limestone facade, Heneghan Peng’s new architecture school for the University of Greenwich is a four-storey composition of steel and glass centred around a double-height critique room (+ movie).

Irish firm Heneghan Peng Architects designed the building to house the 2,000 students that make up the university’s architecture and landscape department, as well as a campus library, and teaching facilities for a new faculty of creative professions and digital arts.

Located within the confines of Maritime Greenwich, a UNESCO World Heritage Site, the building features a limestone exterior designed to “complement but not mimic” the historical architecture – including Hawksmoor’s St Alfege Church and the Royal Naval College by Christopher Wren.

This facade is complicated by a series of angled fins and recesses that respect the lines of the existing street scene. The block is also broken up by narrow courtyards that aim to bring daylight through the building.

“From the very start we did feel that, within historic Greenwich, there was an important necessity to retain the historic block and part of this building was to restore that,” explains architect Shih-Fu Peng in a movie produced by Stephenson/Bishop.

“The materiality of the stone and the kind of continuity of that urban block and its relationship to the outside, one should possibly see as an outdoor room,” he says.

The grain of narrow and wide bands visible on the facade continues through the interior, creating a layout where teaching and learning areas are intermittently divided up by service spaces and circulation routes.

Unlike the stone exterior, the interior is unashamedly modern with exposed concrete surfaces and industrial steel staircases.

The library occupies the northern end of the block so it faces out towards the main university campus. At its centre, a steel staircase extends up through a full-height atrium, while window seats framed by the angular sections of the facade offer quiet reading areas.

The architecture school centres around a 10-metre-high crit space – a forum where students pin up their work for critique. Located on the first floor, this area is surrounded on all sides by design studios.

Galleries overlook the space from above, leading through to seminar rooms where groups can observe the comings and goings below.

“Somehow architects have the capacity to utilise spaces and programme spaces in such a way, even if it was a building meant for something else, so that it still turns out with a particular personality,” says Peng.

“One can probably see that most in the crit space,” he adds. “You have this field of making where students are developing research and coming up with forms and objects and buildings and so forth.”

There are two lecture rooms in the building. Both are located on the ground floor and sink gradually down to the basement. There are also exhibition spaces, shops and a cafe along Stockwell Street.

A landscaped roof features 14 terraces and gardens, covering an area equivalent to 12 tennis courts. Among other things, the school uses this space to accommodate facilities for the study of algae and aquaponics.

The post Heneghan Peng’s Greenwich architecture school
has a restrained exterior and a modern interior appeared first on Dezeen.