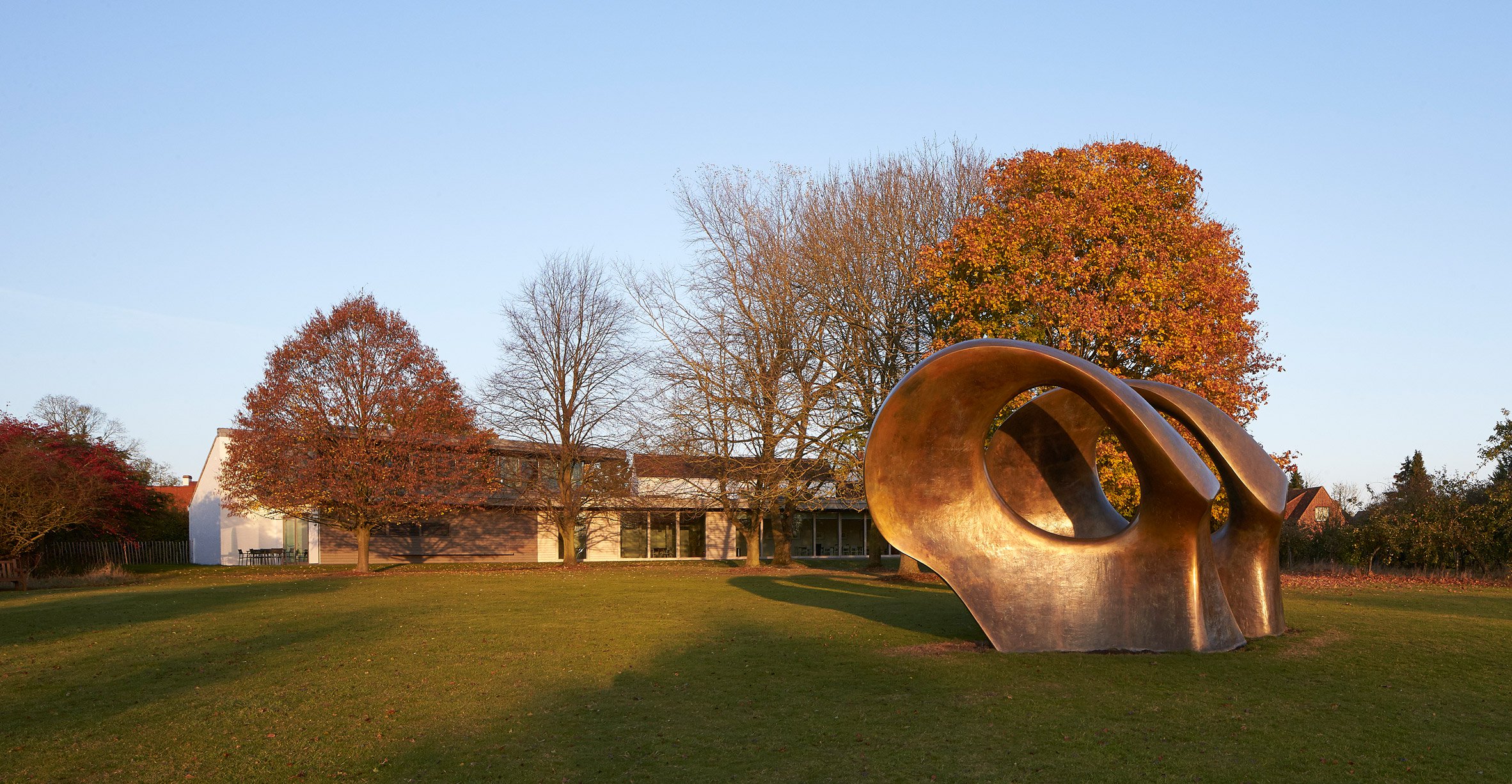 Hugh Broughton Architects has added a new visitors centre and an oxidised-steel extension to the Henry Moore Studios and Garden in Hertfordshire – the site of the artist’s former home.

The architects focused on reusing and extending existing buildings, thereby minimising impact on the estate and preserving the environment, which was cherished by the Moore family.

Moore, who passed away in 1986, was best known for his large and semi-abstract bronze sculptures, which are synonymous with the modernist movement.

“Moore has often been described as parsimonious, making do with what was found, and that approach extended to this estate,” Hugh Broughton told Dezeen. “There is therefore a degree of symmetry in the strategy taken to reuse existing buildings rather than make new.”

The new visitors centre, an extension of the existing Dane Tree House – acquired by the Foundation in 1977 – includes a shop and cafe; a space for education and events; meeting rooms and improved working spaces for staff.

The cafe’s floor-to-ceiling windows open on to the artist’s 70-acre estate of sculpture gardens and studios.

“The design of the visitor centre was developed to reinforce relationships of the visitor with the sculpture and the landscape, hence the extent of glazing and the way in which the gardens come right up to the elevations,” Broughton said.

For the first time, the entire Henry Moore Archive has been brought together under one roof in another new structure. Nearly 750,0000 items – including Moore’s letters, books, photographic prints, negatives and films – are now housed in the archive.

The archive building is made up of an existing house that has been fully refurbished, re-presented and extended so it complies with national standards for the conservation of archive material.

The architecture firm’s sensitivity to the surrounding environment and to Moore’s art is apparent in its choice of materials, including oxidised steel panels – selected to complement the woodland – and the use of sweet chestnut cladding for the visitors’ centre.

The archive building includes an oak reading room, six climate-controlled rooms, and a further project space for the digitisation and conservation of materials.

“The architecture of the new elements wraps around the old and is intentionally modernist in approach, with a rigorous arrangement of columns, flat roofs and overhanging eaves rooting the building to Moore’s own epoch while also aiming at a degree of visual reticence within this rural setting,” Broughton said.

Hugh Broughton Architects had been appointed to develop a masterplan for a two-phase extension to the estate in Perry Green in 2008.

“The brief we were given called for robust, economic and intelligent designs with high levels of energy efficiency achieved with buildings,” Broughton said.

In 2011, the firm completed a new library, archive and new sculpture store on the site. The second phase was completed by the architects in late 2016.

To mark the Henry Moore Foundation’s 40th anniversary, the artist’s studio and gardens launched a new exhibition, Becoming Henry Moore, on Friday 14 April. It will run until 22 October 2017.

Hugh Broughton Architects was also behind the Halley VI Antarctic Research, the world’s first mobile research centre on the floating Brunt Ice Shelf Station, designed for the British Antarctic Survey. The research centre picked up attention towards the end of 2016, after it was discovered that it could be trapped on an iceberg and needed to be towed 23 kilometres to a new location.