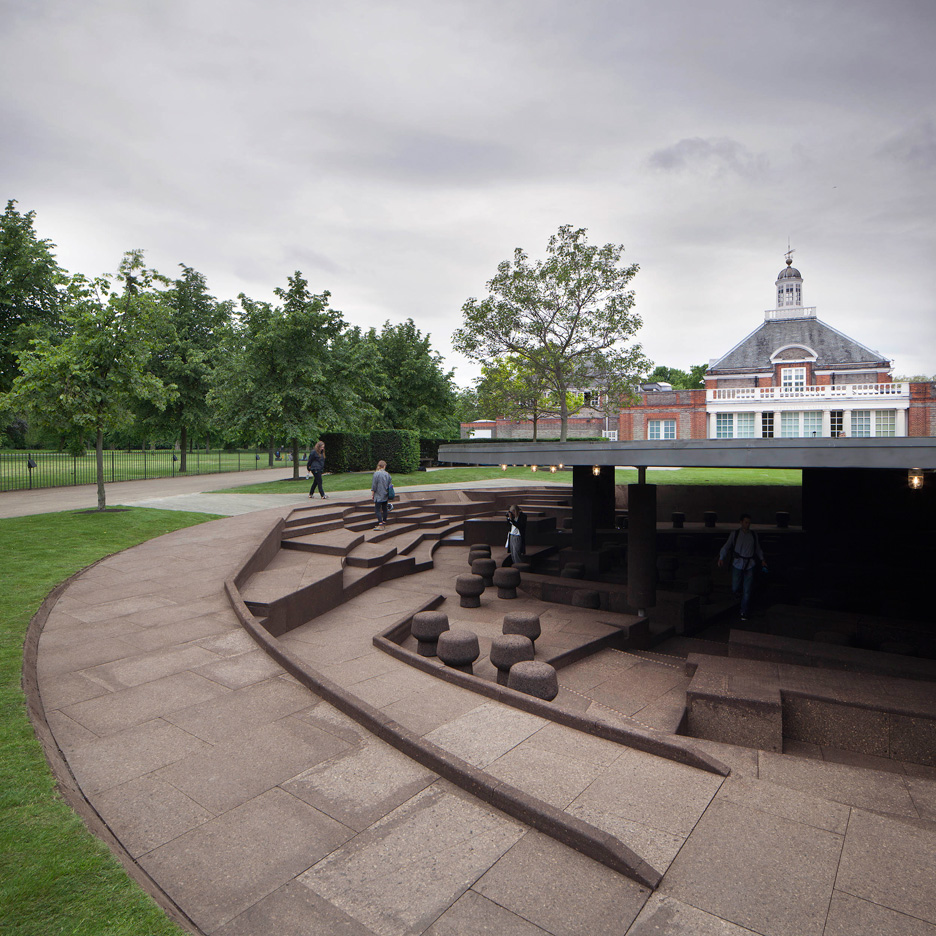 Movie: in the next instalment of our exclusive video series, gallery director Julia Peyton-Jones explains why Herzog & de Meuron and Ai Weiwei dug into the ground to create their 2012 Serpentine Gallery Pavilion.

Herzog & de Meuron and Ai Weiwei teamed up in 2012 to create a sunken pavilion that rose just 1.5 metres above ground level.

The base of the structure descended beneath the lawn of Kensington Gardens, where the soil had been removed to reveal the imagined foundations of previous pavilions built on the site.

“It became a kind of excavation, where they dug down to into the garden,” Peyton-Jones says in the movie. “What they did was a kind of homage to all the other pavilions.”

The series of excavated trenches and steps were lined with cork, which Peyton-Jones describes as having a very distinctive smell.

“It was kind of loamy, that wonderful English word,” she recalls.

“Even though it was the height of summer, there was a coolness and a tranquility, a darkness and almost a dampness that was really very particular.”

The pavilion also featured a circular pool, which formed the roof of the structure. It was supported by a series of twelve cork-lined columns, which represented the twelve pavilions that had been built on the site up to that point.

“You had this great dish on top, which is where the ducks came to swim,” Peyton-Jones says. “So there was this higher level and this lower level, and you were like the jam in the sandwich compressed between the two.”

The project reunited the Swiss architects and Chinese artist after their successful collaboration on the Beijing National Stadium – dubbed the Bird’s Nest – for the Beijing Olympics four years earlier.

“2012 was the year of the London Olympics, so we decided to invite Herzog & de Meuron and Ai Weiwei to collaborate again for the first time since Beijing,” Peyton-Jones explains. “We Skyped with Ai Weiwei, who was still unable to leave China.”

Previous Serpentine Gallery Pavilion commissions went to architects that had not yet built in England. Herzog & de Meuron’s Tate Modern gallery in London was completed in 2000, but Peyton-Jones felt that reuniting such a successful partnership was a good reason to relax the usual rules.

“There wasn’t a need for the British public to see the work of Herzog & de Meuron, because of course it’s very well represented by Tate Modern,” she says.

“But what we were doing was presenting to the British public a collaboration that was so successful in Beijing. We felt that it was important on this particular occasion to explore that partnership.”