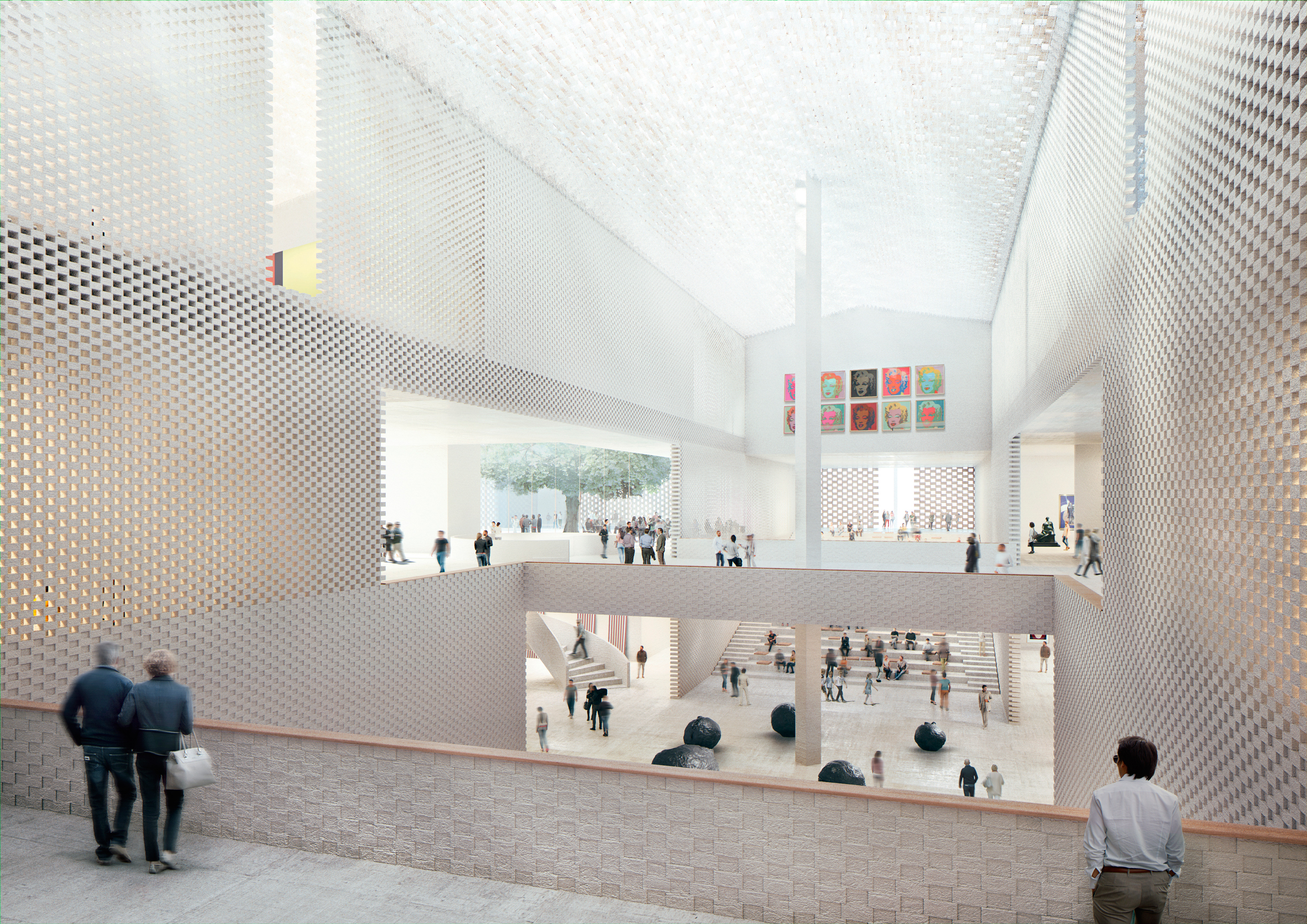 The Museum of the 20th Century will be connected to Ludwig Mies van der Rohe’s 1968 Neue Nationalgalerie building via an underground tunnel.

Located at Berlin‘s Kulturforum – a collection of cultural buildings set near Potsdamer Platz – Herzog & de Meuron‘s museum will also have the Berliner Philharmonie as a neighbour.

The Basel-based practice headed up by Jacques Herzog and Pierre de Meuron was selected to design the scheme ahead of 40 other entrants to the competition, including New York studios SO-IL and Snøhetta, and British firms Zaha Hadid Architects and David Chipperfield Architects.

The firm likens the gabled design to a warehouse or barn. The huge perforated-brick hall will house art works from the latter half of the 20th century, while the Mies van der Rohe gallery will host earlier pieces.

“The Neue Nationalgalerie by Mies van der Rohe was mainly intended to exhibit works from the classical modern period. The expansive masterpieces of the second half of the 20th century need larger and more flexible areas for suitable presentation,” said a statement from the Kulturforum.

“The goal of the new building at the Kulturforum is to end this fragmentation by uniting the 20th century inventory that is currently spread over several buildings,” it added.

“With the aid of the planned connection between the Neue Nationalgalerie and the new building, it will be possible to tour art from 1900 to the developments of the late 20th century within a single museum complex.”

Herzog & de Meuron developed the design in collaboration with Zurich landscape architects Vogt Landschaftsarchitekten. Their plans will be shown at the Kulturforum from 18 November until 8 January 2017.

The Neue Nationalgalerie is currently being renovated by David Chipperfield Architects. The old and new buildings are expected to be connected by a subterranean gallery by 2027, once a high-voltage power line occupying the space is rerouted.

The Museum of the 20th Century is the latest in a succession of cultural buildings to be completed by Herzog & de Meuron including an extension to the Tate Modern art gallery in London, a social research centre in Milan and the Elbphilharmonie Hamburg concert hall.