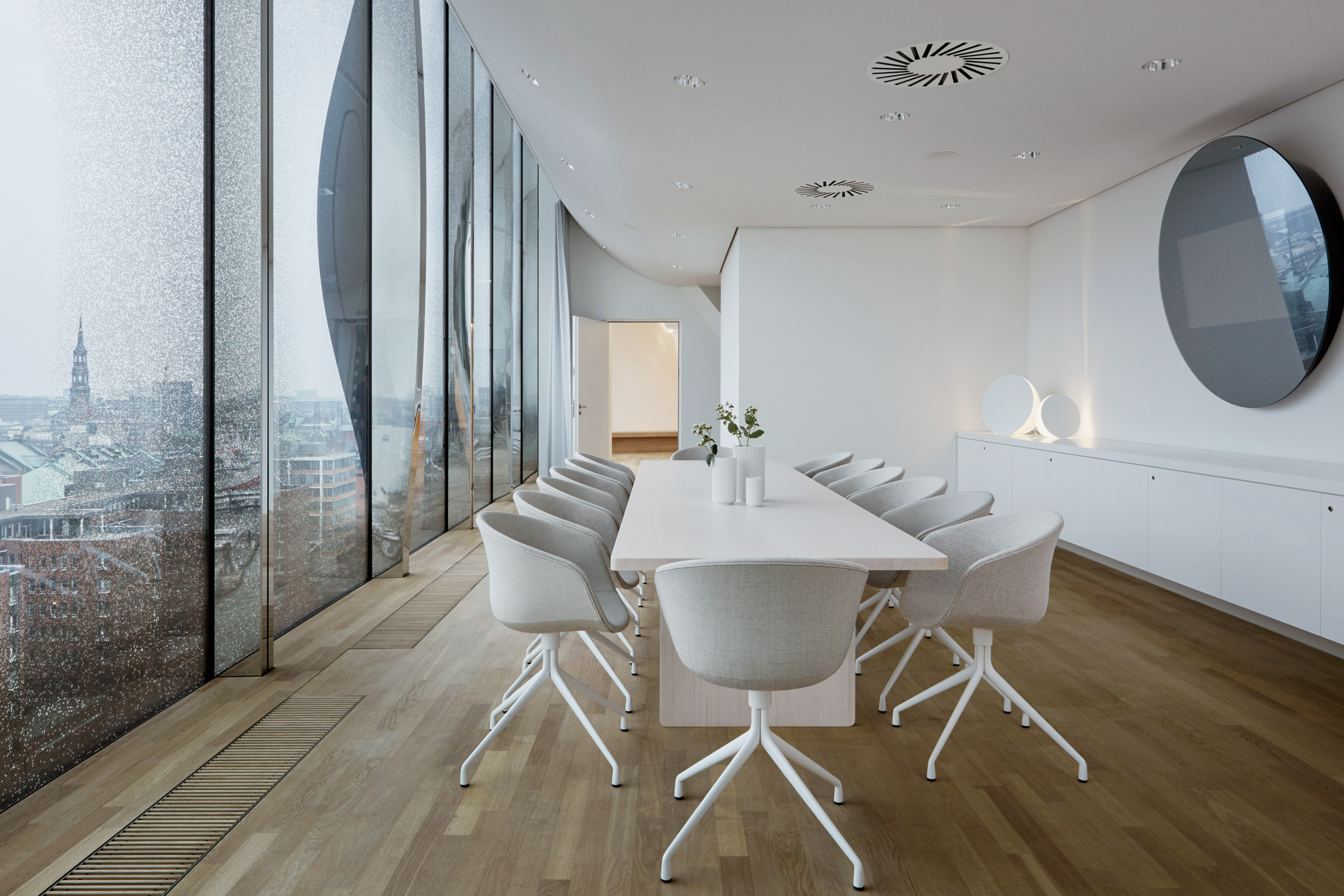 When designing the furniture for Herzog & de Meuron’s £163 million concert hall, Daniel Schöning, Eva Marguerre and Marcel Besau opted for a monochrome colour palette to keep the focus on the surrounding architecture.

Schöning, an architect, enlisted the help of the Hamburg-based designers after he was commissioned to create the interior concept and furnishings in January 2015.

Together, the trio made the conscious decision that furniture would take a back seat in the space. To ensure this, they stuck to a monochrome colour palette.

“By the homogeneous use of one colour, the building, the music and the furnishing form a surprising accord, in which every element speaks for itself and strengthens the singularity of all other elements,” said the designers.

When selecting furniture for the foyers, lounges, conductors’ and soloists’ suites, as well as the rehearsal rooms, the designers chose pieces from relatively young studios.

A Stuhlhockerbank bench by Kraud was chosen for the reception area, while Sylvain Willenz‘s Profile Chair and Profile Table feature in the the artists’ lounge as well as the soloists’ and conductor’ wardrobes.

Accessories by Hamburg-based designer Alexa Lixfeld are placed around the whole building, and in the Circle Lounge, visitors can sit on an upholstered Lift Chair by Eric Degenhardt.

Claesson Koivisto Rune‘s Edi table is in the conference room, as are Stefan Diez’s Houdini and Leo chairs for E15.

The architect and the two designers furnished the terrace of the Sky Lounge with more of Diez’s pieces and the artists’ lounge with the Side Table by KaschKasch. Vases by Hamburg-based label We Are Studio Studio are also on display inside.

In addition to the spectrum of other designers, Schöning, Marguerre and Besau designed a new furniture collection together specifically for the foyers of the concert halls.

This collection, which will go into production in spring 2017, consists of a high table, a bench and a side table.

All versions of the table family consist of a black glass substructure, and black solid wood panels form the tabletop.

Herzog & de Meuron‘s severely delayed concert hall for the Hamburg Elbphilharmonie will finally open its doors on 11 January 2017 – with a price tag more than 10 times the original estimate.

The Swiss firm’s design was originally projected to cost just €77 million (£60 million). According to the Hamburg Senate, the expected final price has now rocketed up to €789 million (£617 million), although a portion of that will be covered by investors.

Photography is by Nina Struve.