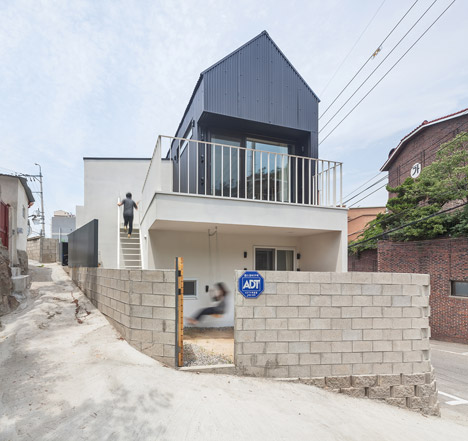 Seoul studio OBBA has completed a house for a pair of newlyweds, featuring a floor that doubles as a bench, a retractable staircase and a dedicated loft for a pet cat (+ slideshow).

The residence was conceived as an alternative to the apartment blocks and multi-tenant buildings that commonly become the first homes of young married couples in the South Korean capital.

“The standardised typology and over-inflated housing price limit the parameters of choice in choosing a house for a young couple,” explained architect Sojung Lee, one of the two founders of OBBA.

“The clients asked us to build a house based upon their fundamental questions about how to start a life together, satisfying the basic essentials,” he continued. “They wanted a modest but plentiful life.”

Named 50m2 house, the compact property is more than 20 square metres smaller than the average newlyweds’ home. It is organised over three main storeys, but there are intermediate levels between floors.

There are also several unconventional details that would have been difficult to install in a typical apartment unit – the most noticeable being a dedicated staircase and loft for the clients’ pet cat.

Related story: House in Sang-an by Studio GAON designed to suit a couple with three dogs

Appearing at first glance to be a long and elaborate shelf, the feline-width staircase winds up around the redundant space above the main entrance and stairs. At the end, a generous ledge allows the cat to survey the comings and goings of its owners.

“The cat loves the space a lot and uses the staircase and plays there a lot,” Lee told Dezeen. “The cat is used to sitting and looking outside waiting for the clients until they come back from the work, and welcome guests from the staircase when they comes in.”

The kitchen and living room occupy the middle floor, to ensure they both receive plenty of natural light.

Rather than separating the rooms by walls, OBBA chose to set the living room three steps higher. This arrangement allows the kitchen counter to also be used as a desk or dining table, if residents sit down on the edge of the living room floor.

Above the kitchen is a loft used by the clients for studying or watching films, which can be accessed using a wooden staircase that extends out from a wall beside the kitchen. When closed, it becomes part of a bookcase slotted behind.

A pair of bedrooms and a bathroom are located on the ground floor. There are also balconies and terraces on all three levels.

“The issue was to conjure up a small but plentiful spatiality within the modest amount of construction budget,” said Lee. “The house is small but every nook and corner of the space is efficiently used.”

The house is located in Gaemimaeul – which translates as “ant village” and features a mix building types arranged across steep slopes.

“The walls of this old shanty town are decorated with paintings in attempt to embellish the area, and this exudes a mysterious atmosphere,” said Lee.

In keeping with this hodgepodge of structures, the house’s exterior resembles two buildings fused together. The first is a low-rise rectilinear block with white walls, and the second is a small black house with a gabled roof.

There is a four-metre change in level across the site, and the house sits halfway between. For this reason, the main entrance is positioned between the lower and middle floors.

A retaining wall of grey blocks wraps around the site perimeter, presenting a blank canvas that could someday be painted to match its neighbours.

Sojung Lee and architect partner Sangjoon Kwak founded OBBA, or Office for Beyond Boundaries Architecture, in 2012. Other projects by the studio include an apartment building featuring a semi-outdoor stairwell screened behind a section of open brickwork.

Photography is by Kyungsub Shin.

According to the Seoul Institute’s 2015 census data, the average floor area of a newlywed’s home is 72.7m2, and among them, 44.6% lives in an apartment building and/or multipurpose commercial/residential building typology. Two third of newly-wed couples lease on deposit basis, and 49.3% of those couples pay 100,000,000 to 200,000,000 KRW. The standardized typology and over-inflated housing price limit the parameter of choice in choosing a house for a young couple.

The clients were soon to be married. They asked us to build a house based upon their fundamental questions about how to start a life together, satisfying the basic essentials. They wanted a modest but plentiful life in it. The project emerged from finding a realistic solution for the newlyweds to move into an alternative abode, other than an apartment building or a multi-unit housing.

The site is sitting in an entrance location of the Gaemimaeul, one of the few remaining colonies of rag pickers in Seoul, Seodaemoon-ku, Hongjaedong. The walls of this old shanty town are decorated with paintings in attempt to embellish the area, and this exudes a mysterious atmosphere. Two adjacent roads–8m wide on the north-east side and 3 m wide on the north-west–meet in an angle, and the site’s south-west and south-east sides are narrow alleyways only for the pedestrians. The site is steeply sloped, whose level difference is 4m.

We concentrated on three main concerns. One was to find ways to read and approach the poor condition of the client’s purchasable land within the limited budget. The other was to integrate the house into the landscape of colorful wall paintings that are contrasted with the existing monotonous shanty town. Lastly, the issue was to conjure up a small but plentiful spatiality within the modest amount of construction budget.

It was important to preserve and utilise the site condition as much as we could, in order for the most effective construction process. The house is two-story building that contains minimum programs requested from the client. The floor area is less than 50m2, the maximum area that doesn’t legally require a parking lot.

As the site is surrounded by the roads sloping up towards north, we designed the entrance of the building in between the first and second floors. For the efficient movement and program arrangement of the house, we placed the living room and the kitchen on the second floor, in order for a sufficient natural light and a great view, as the couple spends most of their time in these spaces. Some private rooms and bathroom are on the ground floor. The house is small but every nook and corner of the space is efficiently used. At the attic of the house is a study or a movie screening room, and the stairs that lead to the attic functions as bookshelves. There is a level difference between the living room and the kitchen so that the cooking table is extended to a seated dining table in the living room.

Our dwelling culture has been occupied by the large scale development along the capitalist logic, which resulted in erasing many of the city’s own characteristics. If we look for solutions to the remaining poor-conditioned small lands in the city, one could anticipate that our dwelling typology be abound again, while reserving the traces of the local qualities.

The post House in Seoul by OBBA features a retractable staircase and a loft for cats appeared first on Dezeen.