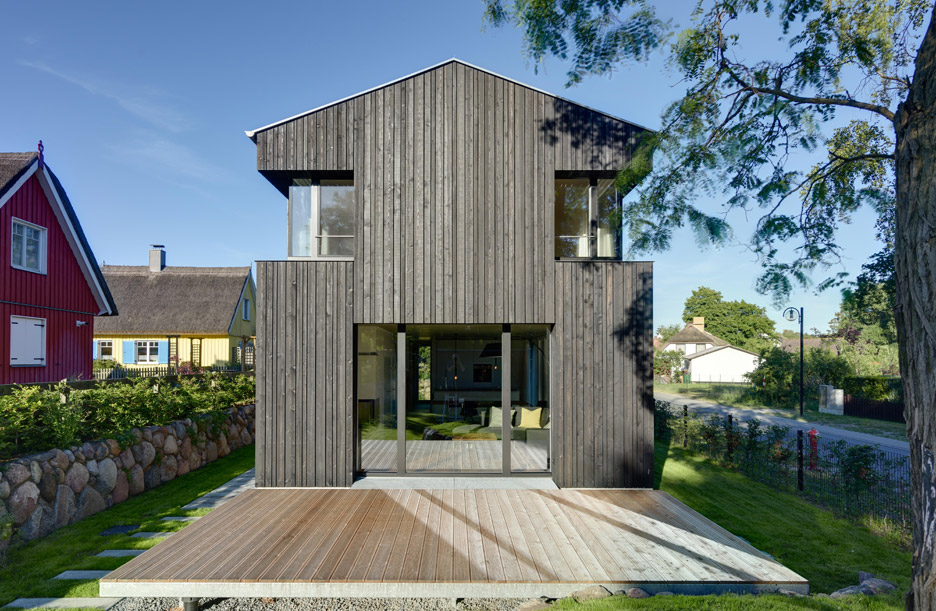 Möhring Architekten clad this holiday home in rural Germany in black-painted wood to look like a traditional barn, but then cut windows out of the corners to give it a contemporary edge (+ slideshow).

Berlin-based Möhring Architekten designed House Wieckin in the town of Darss, the middle section of the coastal peninsula of Fischland-Darss-Zingst.

The clients wanted to mix traditional elements of the local vernacular architecture – including what they call drempel houses – with modern details. They clad the house in black-painted larch wood to reference local farm buildings.

“The traditional building type of the local ‘drempel houses’ and also simple barns, had great influence on the house’s appearance and the material chosen,” studio founder Norbert Möhring told Dezeen.

Instead of a thatched roof, the team used zinc panels with raised seams, helping to differentiate the property from its neighbours. They also recessed the windows, making the walls appear especially deep.

“All windows are indented to create a more modern look of the house and, at the same time, add a small bit of shelter from the sun,” said Möhring.

On the second floor, four windows are cut out of each corner, while the ground floor has a large window located on the road-facing side to provide light and views for the open kitchen, dining and living space.

The house will function as a holiday house, to be rented out to up to six people. Because of the thin plot, the internal layout was kept as simple as possible, with few corridors.

“The greatest challenge was the extreme proportion of the building site, which was extremely narrow and long,” said Möhring.

The entrance is located along the side of the building, with a concrete arch forming a porch over the front door. Stepping stones lead around to the narrow garden, where a wooden terrace forms an extension of the living space.

Wooden flooring and concrete finishes were used throughout the building to make the space feel modern and clean.

White units offer storage for the kitchen, while more cabinets are located below the concrete stair for the dining room and simple black pendant lights hang from the ceiling above the table.

In the living area, the wall drops to form a platform for a glass fireplace.

A small bedroom and bathroom sit alongside the kitchen. Upstairs, two larger bedrooms are linked by a hallway that is lit by skylights. The beds are flanked by the corner windows.

There is also large bathroom and sauna, sandwiched in between the bedrooms.

Black-stained barns are a common sight around Europe, and have inspired a few contemporary adaptions. Other examples include a Dutch house made up of four interlocking volumes and a self-sufficient English countryside residence.