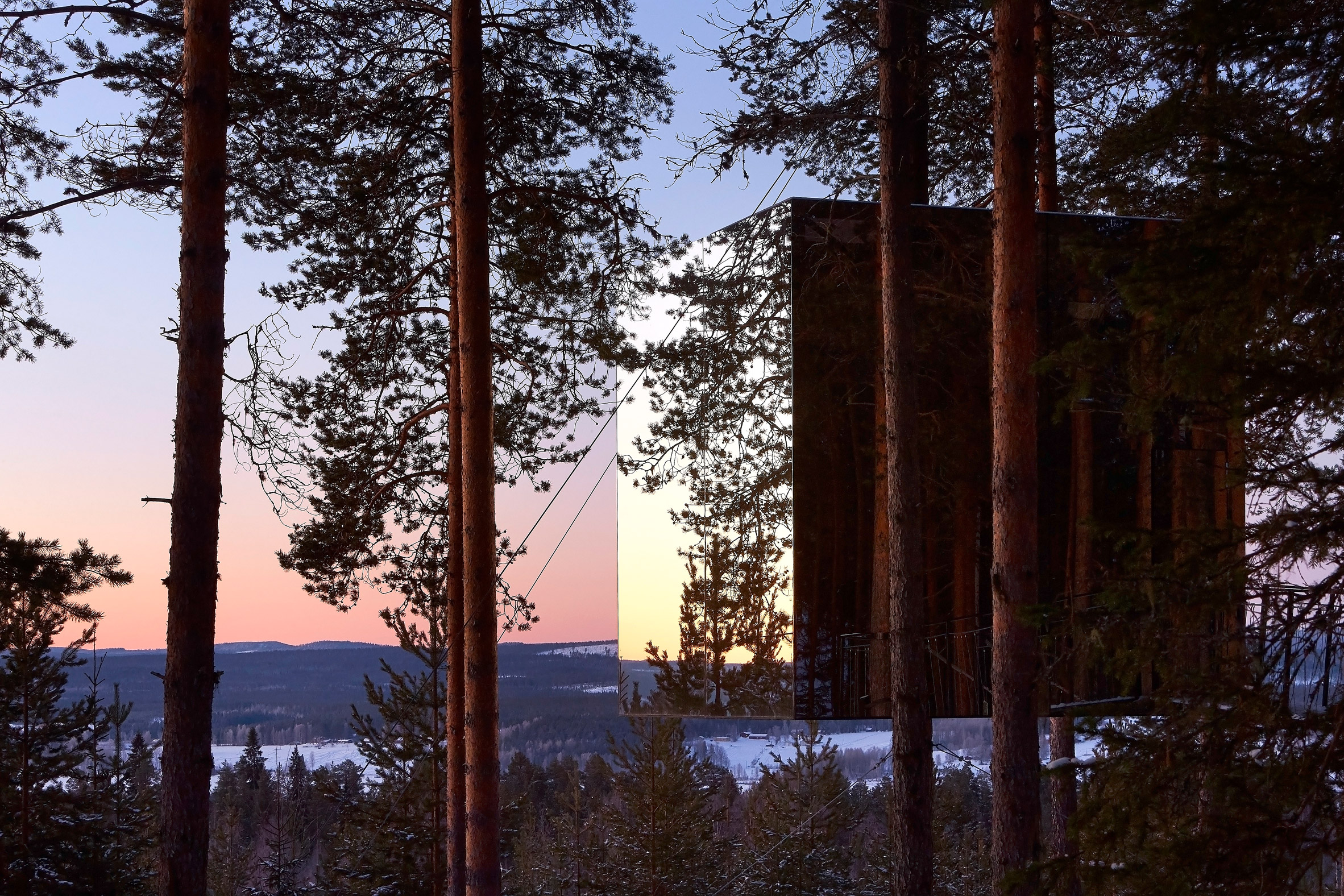 Among the themed cabins architectural photography duo Hufton + Crow shot is a flying saucer-shaped cabin and a mirror-covered box designed to reflects its forested setting.

Husband-and-wife team Kent and Britta Lindvall set up Treehotel in 2010 to cater to tourists visiting the Arctic Circle in search of the Northern Lights.

Over the years, the hoteliers have called on architects including Snøhetta and Tham + Videgård Arkitekter to add to their growing number of tree-mounted cabins.

Completed earlier this year, the 7th Room by Snøhetta is the newest of the Treehotel’s suites. The charred-timber cabin is suspended among the crowns of some of the forest’s tallest pine trees.

This suite features a stargazing net, which is designed to act as a giant hammock for the more adventurist guests.

The pair also captured the hotel’s most famous suite – a mirror-clad cube by Swedish studio Tham + Videgård Arkitekter. Captured at dusk, the presence of the Mirrorcube is only given away by the illuminated windows and cables.

The vivid red structure of The Blue Cone cabin by fellow Swedish practice SandellSandberg can be seen in the background of some of the photographs of the Mirrorcube. It’s peaked roof is capped in a light skiff of snow.

Also included is The Cabin by Cyrén & Cyrén, which dates back to the Treehotel’s beginnings in 2010, The UFO by Inrednin Gsgruppen and The Dragonfly by Rintala Eggertsson Architects

The only suite omitted from the set is The Birds Nest by Swedish practice Inrednin Gsgruppen, a structure covered in a seemingly haphazard arrangement of sticks that lend it the appearance of an oversized nest.

Nick Hufton and Allan Crow originally trained in analogue, using the large-format camera preferred by many architectural photographers, like Hélène Binet, but later switched to digital.

The photographers, who now count the world’s most famous architects among their clients, previously spoke to Dezeen about the process behind their work.

Most recently, we featured the pair’s photography of Richard Meier’s first project in the UK – a bright white house in the Oxfordshire countryside.

Seven unusual treehouses you can sleep inside at Sweden’s Treehotel