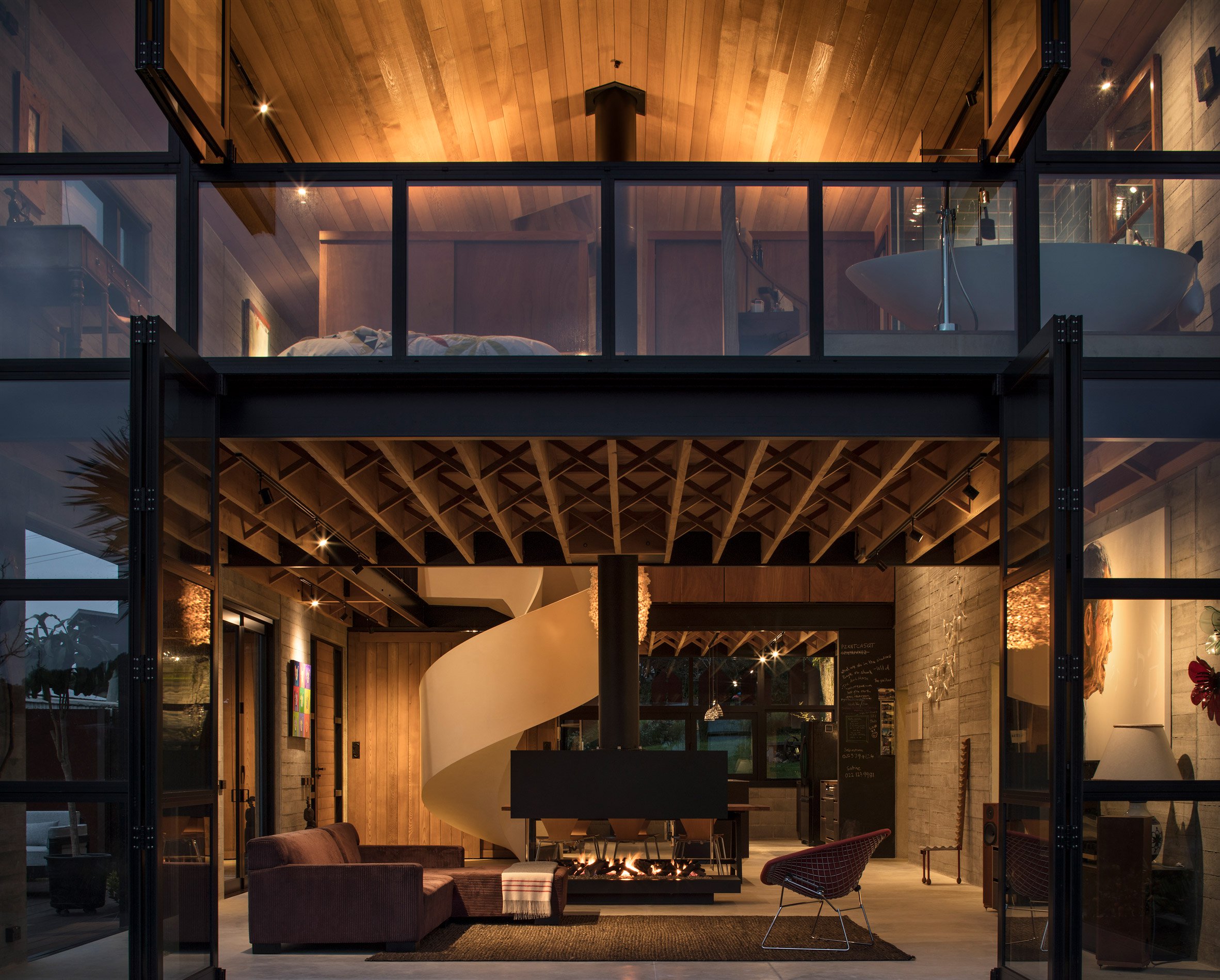 Architect Vaughn McQuarrie has completed a house on New Zealand‘s Waiheke Island that features fully glazed gable ends, and a helical staircase connecting an open-plan ground floor with mezzanines above.

McQuarrie based the design of Anzac Bay House on the simple gabled form of a traditional boatshed, which is appropriate to its setting next to the sheltered cove.

Internally, the architect wanted to create an open feel, with a capacious living area occupying the majority of the ground floor and a series of additional functional spaces arranged around its edges.

“The concept for the house was to create a central grand space surrounded by smaller spaces,” McQuarrie explained, “somewhat like a church in the centre of a small village.”

The large living space is facilitated by a pair of parallel precast-concrete walls that form the building’s main structure, and support a lightweight pitched roof.

Steel I-beams fixed to the walls on either side brace the structure and are traversed by a series of perpendicular wooden rafters held in place by criss-crossing struts.

The exposed structure is complemented by bare walls made from a lightweight precast concrete material called Litecrete, which contains pumice aggregate that improves its thermal performance.

“[The Litecrete panels] in combination with exposed steel beams and timber floor beams allow the primary structure of the main space to become the finished fabric,” the architect explained.

The house is entered from a lane that extends from the street along the side of an old stone wall separating it from the neighbouring property.

A large door that opens directly into the main living area is positioned adjacent to a white helical staircase and beneath a bridge connecting the two mezzanine platforms at either end of the house.

An office is accommodated on the mezzanine looking out towards the street, while the master suite is positioned at the rear of the building to provide the necessary privacy.

Both gable ends are fully glazed and incorporate windows at the centre that open outwards to allow fresh air to circulate.

A kitchen containing a large island unit is positioned at one end of the open-plan room, with a dining table at the centre and a lounge at the opposite end.

Folding glass doors at the rear of the building open onto a deck that extends around the corner of the living space and provides views down to the sea.

McQuarrie worked in the UK for a decade before relocating his practice to the island off the coast of Auckland, where he has also designed a concrete and timber cottage set among mature gardens.

Photography is by Simon Devitt.