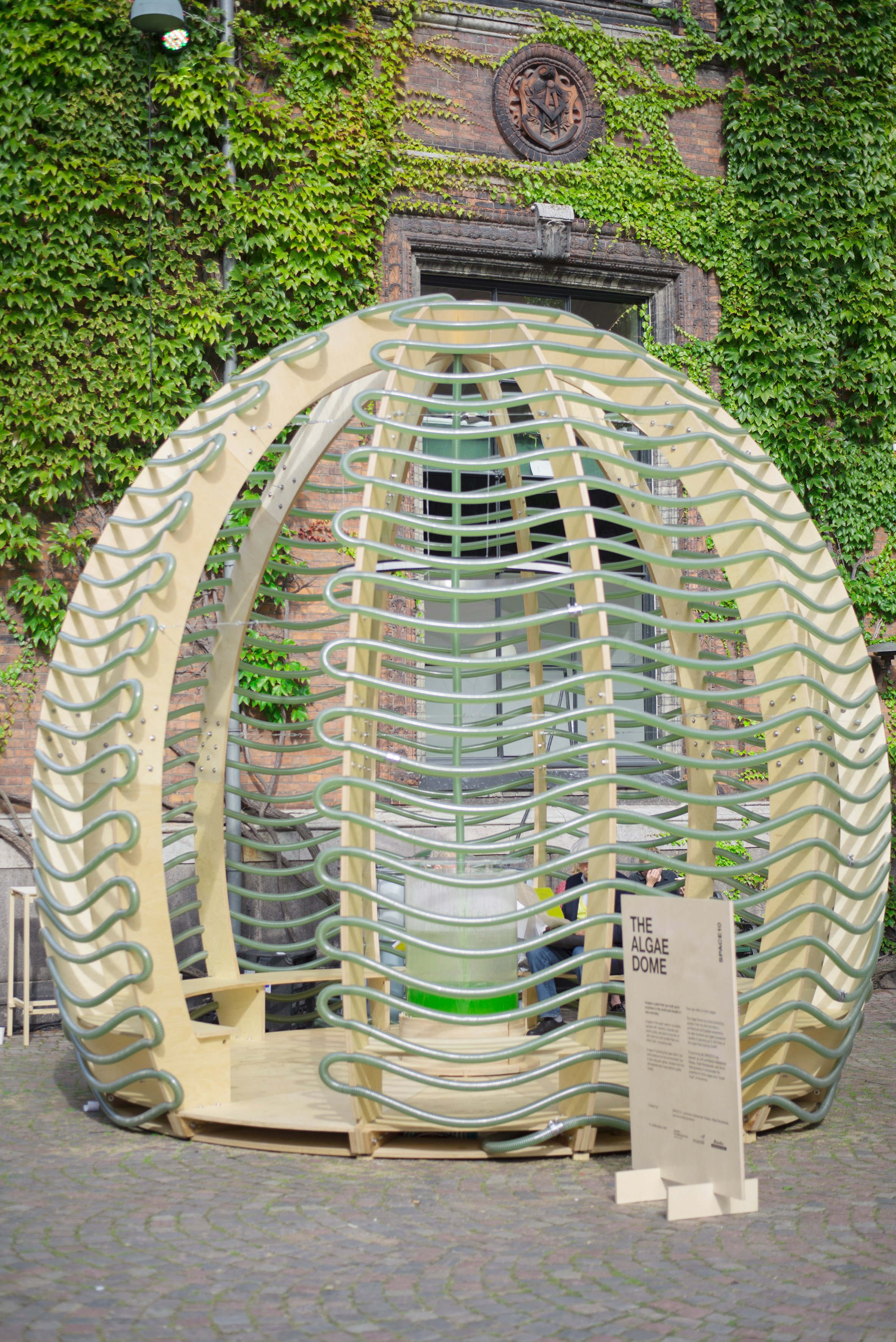 Described by Space10 as a “food-producing architecture pavilion”, the futuristic dome houses a photo-bioreactor — a closed system that enables the high productivity of green microalgae.

The dome was installed at Copenhagen’s CHART Art Fair last week with the aim of highlighting the potential of algae as a sustainable super crop of the future.

Packed with vitamins, minerals and essential amino acids, microalgae contains 50 times more iron than spinach and more than twice as much protein as meat.

“One of the areas we’re exploring is the future of food and ways to improve the food system,” said Space10. “We believe that algae could provide the answer to some of the world’s biggest problems—from malnutrition to climate change.”

The Algae Dome was chosen to be exhibited at this year’s event after winning an architecture competition run by the fair. Architects Aleksander Wadas, Rafal Wroblewski, Anna Stempniewicz worked with Space10’s bioengineer-in-residence Keenan Pinto to design and build the dome.

Wrapped in 320 metres of coiled tubing filled with flowing green microalgae, the dome was able to produce over 450 litres of microalgae during the three-day fair.

To add to the experience, visitors to the dome were able to sample spirulina crisps developed by Space10’s chef-in-residence, Simon Perez.

The Copenhagen-based studio proposes that in the future, different species of microalgae could be used as: a nutrient-rich replacement for soy protein in animal feed; in the development of biofuels; as a way to reduce carbon dioxide and other greenhouse gases from the atmosphere; as a method of treating industrial wastewater.

“Microalgae could help combat malnutrition, reduce our dependence on fossil fuels, help stop the destruction of the rainforest, improve air quality, and reduce pollution,” said Space10. “Imagine an apartment building equipped with a similar photobioreactor that not only boosted hyper-local oxygen levels but also produced spirulina that the building’s residents could use to supplement their diets.”

“Or picture kitting out bus stops with algae that stripped greenhouse gases from the atmosphere and produced spirulina that could be used to bake fortifying bread for malnourished families,” continued Space10.

Pinto summarised: “Ultimately, the Algae Dome aims to trigger conversations about how we can grow large amounts of nutritious food within our cities, reduce our impact on the planet, and use biology to solve some of the world’s biggest problems.”

Opened in November 2015 and funded by IKEA, Space10 is a research hub and exhibition space in Copenhagen that is used to test product prototypes and find ways of boosting consumers’ wellbeing. Its other food-based projects have included a visual exploration into what the next 20 years of food design might hold for the meatball, in which the studio imagined meatballs made from artificially-grown animal flesh and crispy insect protein.

Photography is by Niklas Adrian Vindelev.