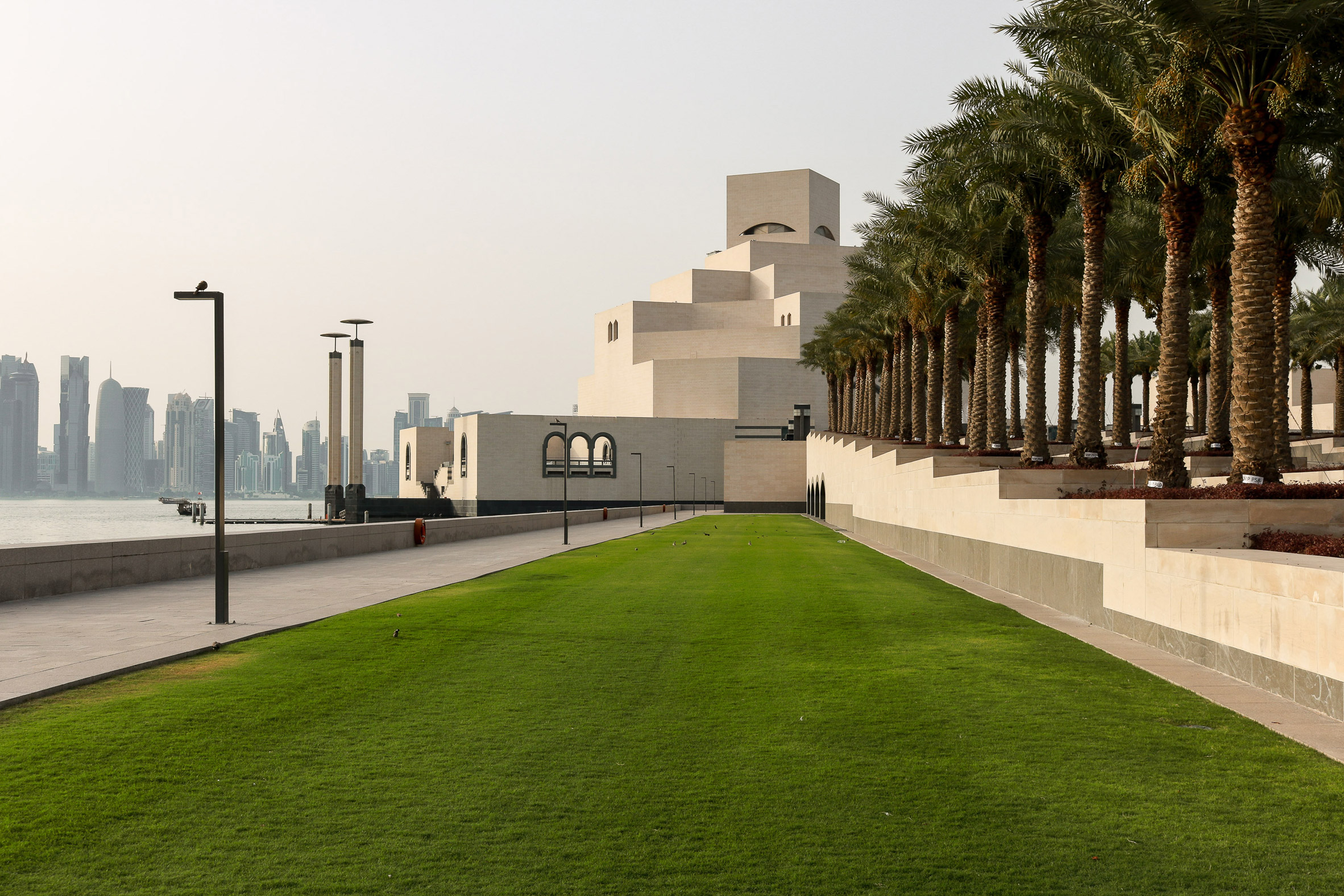 These photographs by Yueqi Jazzy Li show the monumental form of IM Pei’s Museum of Islamic Art, eight years after the building completed in Doha, Qatar.

New York-based Jazzy Li captures both the exterior and interior of the museum, which Pritzker Prize-winning architect IM Pei, 99, designed for artificial island on the Arabian Gulf just off the Doha Corniche – a waterfront promenade along the bay that borders Qatar’s capital city of Doha.

Taken during the stifling Qatari summer, the photographer’s day and night images showcase changing shadows on the museum’s light-stone volumes.

Staggered backwards to rise around a five-storey tower, the blocks house galleries of Islamic artwork arranged around a grand central atrium. On the north side, a glass curtain wall offers panoramic views of the Gulf and West Bay area of Doha from all five floors of gallery space.

“The interior geometry is then conceived, executed, and maintained in such purity, rigour, and precision that make wandering through the space a pleasure itself,” he continued.

Pei, who travelled far and wide to develop an understanding of Islamic architecture, based the design on the ninth-century ablution fountain at the Mosque of Ahmad Ibn Tulun in Cairo, where he said he found “a severe architecture that comes to life in the sun, with its shadows and shades of colour,” at the time of the building’s completion.

Along with the monumental form, the Chinese-born American architect included grand decoration inside the museum. Jazzy Li has captured the patterned-light reflected from the oculus at the top of the atrium and the ceilings, which are embellished with coffered domes.

A circular perforated metal chandelier is suspended above two staircases, which are parted to lead up to the galleries, while the floor features a decorative black and brown pattern.

“Appearing to be symmetrical in plan, one can see the astonishingly perfect alignments of centre lines of stairs, doorways, chandeliers, all the way down to the coffered ceilings and even glass railing open joints,” said Jazzy Li.

“The symmetry is effortlessly broken up by the triangulated walls that support the roof as they engage the columns at different heights.”

Ieoh Ming Pei was born in China, but moved to the US to study architecture. He never returned to live in his home country and established his firm IM Pei & Associates in 1955, which later became IM Pei & Partners and is now known as Pei Cobb Freed & Partners.

Pei – now fast approaching his 100th birthday – retired from full-time practice in 1990, with a portfolio including the National Gallery of Art East Building in Washington DC, and the Bank of China Tower in Hong Kong.

He has received several prestigious awards, including the Pritzker Prize in 1983 and the Royal Gold Medal in 2010.