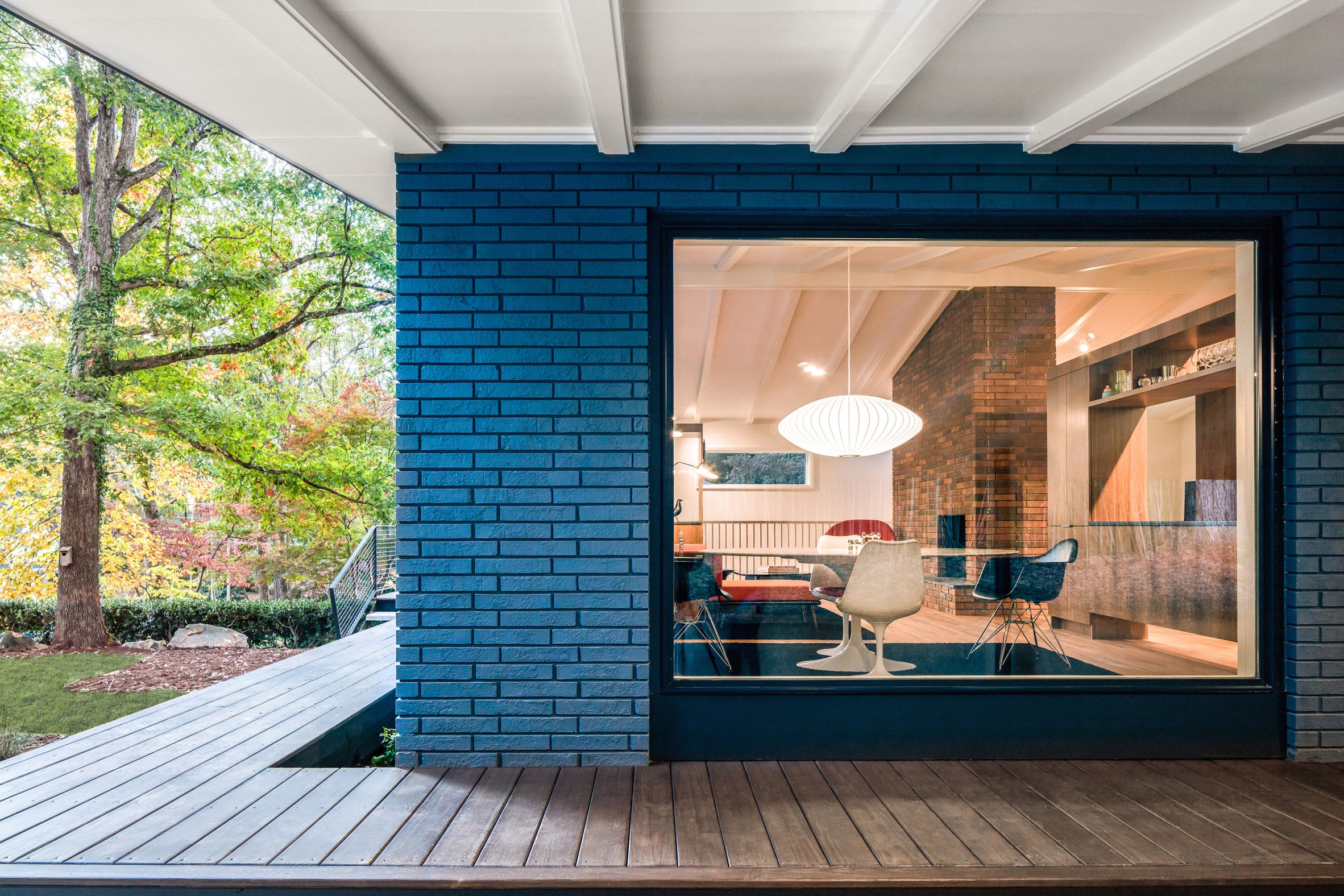 American firm In Situ Studio has overhauled a mid-century modern dwelling in Raleigh, North Carolina, that had been “haphazardly chopped up” over the years.

The Ocotea House is situated within a suburban neighbourhood dotted with mature trees. The brick, ranch-style home was built in 1959 and had been significantly altered over the years.

“What was originally a clean image of midcentury residential architecture had fallen into disarray,” said In Situ Studio, a local firm established in 2010.

“The basement had been haphazardly chopped up to accommodate additional bedrooms, the main floor and public spaces had been reconfigured in an odd way, and a very poorly built sunroom had been added to the right side.”

The architects set out to remove the modifications and uncover the home’s original character. In addition to new finishes inside and out, the firm added and removed elements and restructured interior spaces.

“The house now sits comfortably in its midcentury neighbourhood, a stark alternative to the method of buy, bulldoze, build-out that currently plagues Raleigh’s first-ring suburbs,” said the studio, which previously designed a cabin in a North Carolina forest.

On the east side of the home, the team did away with the sunroom and replaced it with a covered carport that extends the line of the roof. A new elevated deck was added to the street-facing elevation, which introduces “a floating, thin aesthetic to the formerly heavy front facade”.

“We considered a range of colour palettes, from light to dark,” the architects told Dezeen. “In the end, we felt the darker colour made the house feel more trim and worked well with the palette of the surrounding site, including several large white oak trees and a beautiful cedar tree at the front of the property.”

The team did remove select hedges and trees that were overgrown or needed to be cleared to make way for a new, buried power line. “In the front, we kept a planted area of trees, but limbed them up to allow screened views of the house from the street,” In Situ said. The rear yard was also cleaned up, with plants like gardenias and white oaks left in place.

Inside, a wall between the living room and kitchen was removed, resulting in an open area punctuated with a large brick fireplace. The ceiling, including its exposed beams, was painted white, giving the room a light and airy feel. In the kitchen, the team replaced dated decor with modern walnut cabinetry.

The cramped master suite, located on the ground floor, was overhauled. The team raised the ceiling and enlarged closets.

It also redesigned the bathroom, adding a shower with frosted glass walls that are visible in the bedroom.

“While it is only marginally larger than the tiny original bathroom, the main feature is what we call a lantern shower,” the studio said.

“This shower is about half the square footage of the bathroom, is surrounded by frosted glass on the two sides that face the bedroom, and has a large skylight in the ceiling. This fills the entire master suite with light.”

In the basement, the architects created a new bedroom and family room. The lower level also contains a garage, laundry room, bathroom and storage area.

The old stairs leading to the basement were removed and replaced with a more open scheme.

“The original stairs ran in the other direction, dead-ending at a dark landing in the corner of the basement with a door,” said In Situ. “We flipped the stair to open it to the main space of the basement and left it open (no door).”

The team also added a skylight over the stair, enabling more natural light to enter the below-grade space.

Photography is by Keith Isaacs.