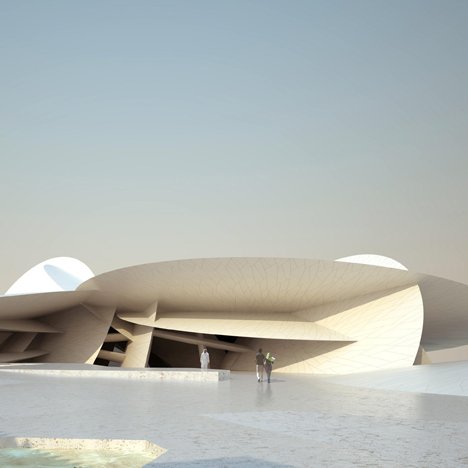 Images of Jean Nouvel‘s National Museum of Qatar in Doha are beginning to emerge on Instagram as the building’s interlocking design nears completion.

Inspired by the rose-like formations of crystal that appear in the desert sand, the building is composed of a ring of low-lying and linked pavilions, which encircle a large courtyard area and existing palace.

The Instagram images offer glimpses of the building’s elaborate exterior.

The 14-hectare site is located at the south end of Doha’s Corniche where it will be the first monument seen by travelers arriving from the airport. The museum is intended as a hub for culture and communications.

The tilting discs that make up the museum’s floors, walls and roofs are made from a steel truss structure clad on the exterior in sand-coloured concrete. The voids between the discs are glazed.

In addition, the museum will house staff facilities including a heritage research centre, restoration laboratories, staff offices and collection processing and storage areas. An 11-hectare landscaped park inspired by the Qatari desert landscape will surround the museum.

A post shared by Francisca Antunes (@franciscarochaantunes) on Aug 6, 2017 at 7:58am PDT

The ambitious design, which was first unveiled in 2010, will open December 2018 according to Sheikha Al Mayassa, the chair of Qatar Museums.

“This museum is a modern-day caravanserai. From here you leave the desert behind, returning with treasured images that remain engraved on your memory,” said Jean Nouvel, when the designs were unveiled in 2010.

“The National Museum of Qatar will become the voice of a culture, delivering a message of modernity, metamorphosis and the beauty that happens when the desert meets the sea.”

In 2015 it was announced that the museum was taking suggestions for its new logo and branding as part of a nationwide competition encouraging public involvement in design. Overseen by organisation Qatar Museums, all Qatari nationals over the age of 18 were able to enter and suggest designs for the new museum’s graphic identity.

The museum is not the only project designed by the Pritzker Prize-winning architect that’s taking shape in the Middle East; Nouvel’s dome-shaped Louvre Abu Dhabi is set to open on 11 November this year.

National Museum of Qatar to crowdsource its visual identity