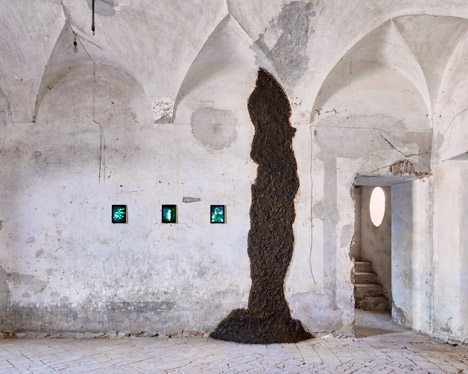 The Museum of Shit is housed in an Italian castle and is dedicated to demonstrating “what a useful and living substance crap really is” (+ slideshow).

Opening this month, the Museo della Merda – or Museum of Shit – showcases projects that span between art and technology, but are all in some way linked to the reuse of organic waste.

The museum is located at the Castelbosco dairy farm in the Picenza province of northern Italy, where 2,500 cows produce 30,000 litres of milk as well as 100,000 kilograms of dung.

Seeing an opportunity to use this waste for profit, the farm’s owner Gianantonio Locatelli created an industrial facility that extracts the methane gas from the manure, which can be burnt as an energy source.

His plant also turns the dung into a raw material that can be used as a building product, either as a plaster or fired to form bricks.

Together with architect Luca Cipelletti, curator Gaspare Luigi Marcone and gallerist Massimo Valsecchi, Locatelli created a museum inside a late-medieval castle on the site to showcase the potential uses and benefits of the waste material.

“In the museum spaces and castle rooms – and in their digital version – those aesthetic and scientific, human and animal, modern-day and yesteryear experiences are and will be on show, displaying what a useful and living substance crap really is,” said the museum’s website.

Visitors first take a tour around the farm and its production facilities to learn about where the material comes from, and the processes that transform it into a useable material.

Related interventions by artists such as David Tremlett and Anne & Patrick Poirier are located around the site.

Inside the renovated castle, the interior has been stripped back to reveal the building’s original structure. The ground floor is dedicated to the display of conceptual materials and installations.

The spaces are kept warm by engines that generate heat using the methane extracted from the manure, while iron-framed vitrines are partially clad with dung.

Plaster made from the muck covers sections of the walls, carefully placed to look as if it is pouring from the ceiling.

One wall is mounted with a set of 16 glowing green jars. The light is generated by bioluminescent bacteria that feeds on methane pumped into the vessels, demonstrating that light can be created using entirely natural materials.

Continuing the theme of reuse, old iPads and iMacs display media and information about the exhibits.

“The Shit Museum will expand in three dimensions: not only will it remain a physical space to visit, but also a virtual space and an ever-evolving reality,” said Cipelletti.

“The contents of the Museum will also be loaded onto its online platform, a website which allows for direct and broad interaction with the public, as well as the constant updating of activities, projects and initiatives,” he said.

To promote the museum, Cipelletti has lined Milan’s POMO Galerie with the excrement plaster and presented the bricks as an installation titled Shit Show.