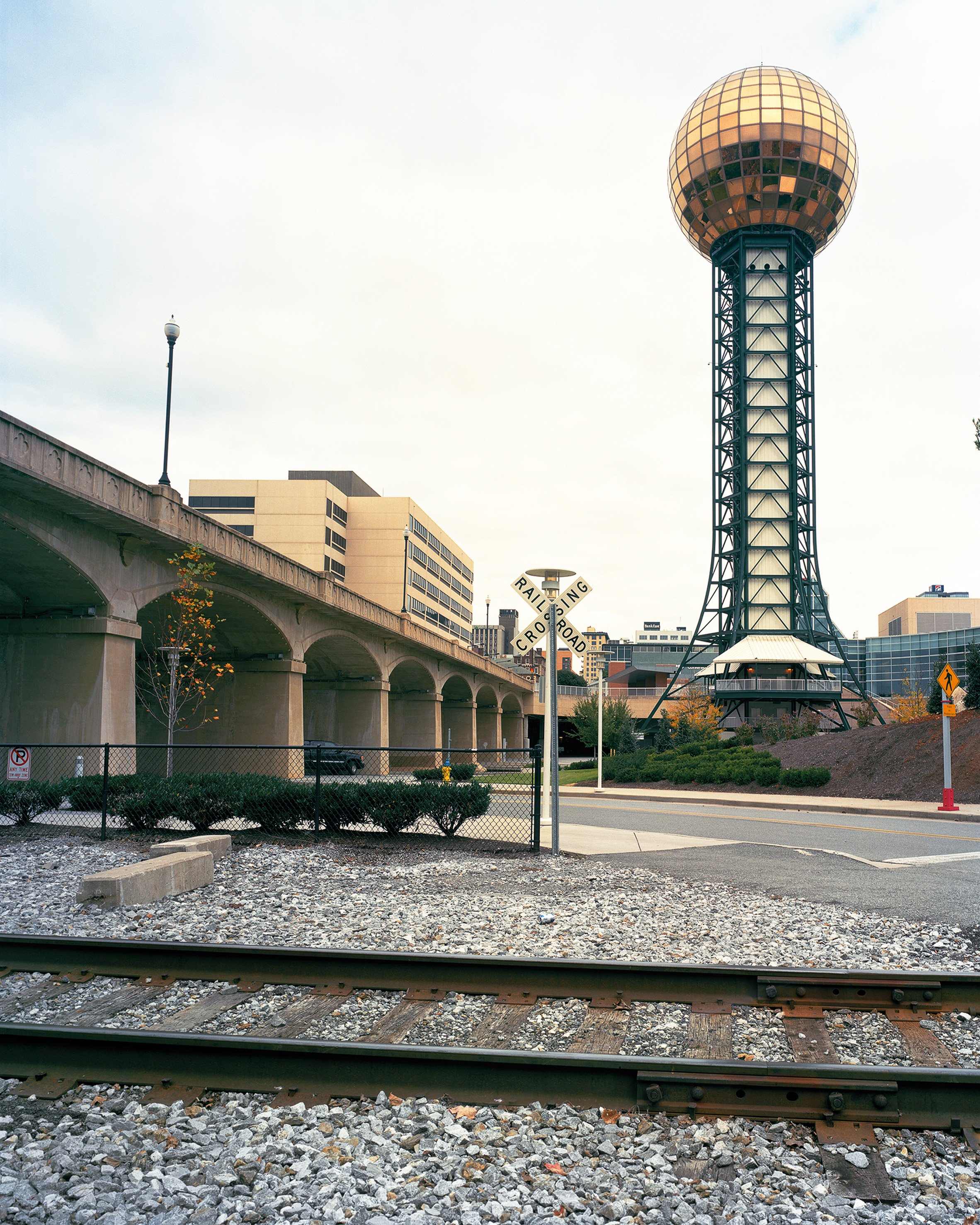 Once a display of the time’s most pioneering ideas, these exposition sites now exist predominantly in a state of decline or dereliction.

The dystopian-style series has seen Doskow travel to and photograph the remaining art, architecture and landscaping at 27 of the World’s Fairs sites across North America and Europe.

The images illustrate the urban sites in their recent states, having either been left victim to the elements like New York’s 1964 State Pavilion, or revived and maintained as popular tourist attractions like Paris’ Eiffel Tower.

The concept for the Lost Utopias project initially developed from a family trip to Seville in 2004, when New York-based Doskow came across the 1992 World’s Exposition site.

“I was immediately captivated by the surreality of the situation and the seemingly hodgepodge use of the huge site,” she explained.

“Canals were filled with tall grasses, a decorative fountain glistened with beer cans and algae, many structures were overgrown with weeds, yet several buildings were still in use, including for the RTVA radio station of Seville.”

Following this experience, in 2006 Doskow began to plan her project of photographing numerous World’s Fairs sites across the world, which took off a year later with the 1939 and 1964 New York sites, then moving on to locations in Chicago and Europe.

Doskow described the project as “a cross-disciplinary extravaganza encapsulating science, industry, art, architecture, as well as the historical and cultural frameworks in which each past fair had happened, which influenced the specific context in which everything was constructed and conceived in regards to technology, race, and design.”

Not only was the history compelling, Doskow told Dezeen, but the different ways in which each city dealt with the sites after their closing also revealed a lot about the city itself and how it has approached historic preservation and urban planning.

Doskow devotes around three to five days to each place, researching their current condition and contemporary layout in comparison to the original fair maps. In doing so, she aims to capture images that “reflect the current use of the structures and landscaping as well as the emotional and metaphysical state of the place”.

Out of all the sites captured, Doskow said the “most successful metaphor” for the project was the 1964 New York State Pavilion in Queens.

Despite being situated in one of the world’s most well-known cities, and built by the modern architect Philip Johnson, the site nonetheless exists in a half abandoned “limbo state”, being too difficult and costly to be repurposed and yet too important to be demolished.

Deserted sites like this stand in stark contrast to the various existing sites like Paris’ Eiffel Tower, Trocadero, and Palais de Chaillot (all constructed for Paris’ 1937 Exposition Internationale) which have been consistently used and improved upon.

Taking a slower, more meditative approach to shooting the sites, Doskow uses a large-format camera for the project, similar to what would have been used by the photographic pioneers of the early World’s Fairs.

After processing the film, she then “painstakingly perfects” the images using photoshop, sometimes taking up to a year to complete a final print.

“As any artist can tell you, it is important to sit with an image for quite a while and figure out if it works and if it makes sense in the greater context of the project,” Doskow told Dezeen.

“Also photography and world’s fairs had a direct and reciprocal relationship, as the first major photography exhibition was at the Great Exhibition of 1851 in Crystal Palace in London, so I appreciate being able to use similar tools as to what the early pioneers would have used.”

She finished photographing the North American sites in 2015, and by 2016 the first monograph of her work, Lost Utopias, was published by Black Dog London. She has since spent the last few years revisiting sites that have changed since she last shot them.

Following this decade-long project, Doskow now wishes to focus more on sites outside of America and Europe, and plans to base her photography in places like Japan, China, South Korea, and Australia over the next five years.