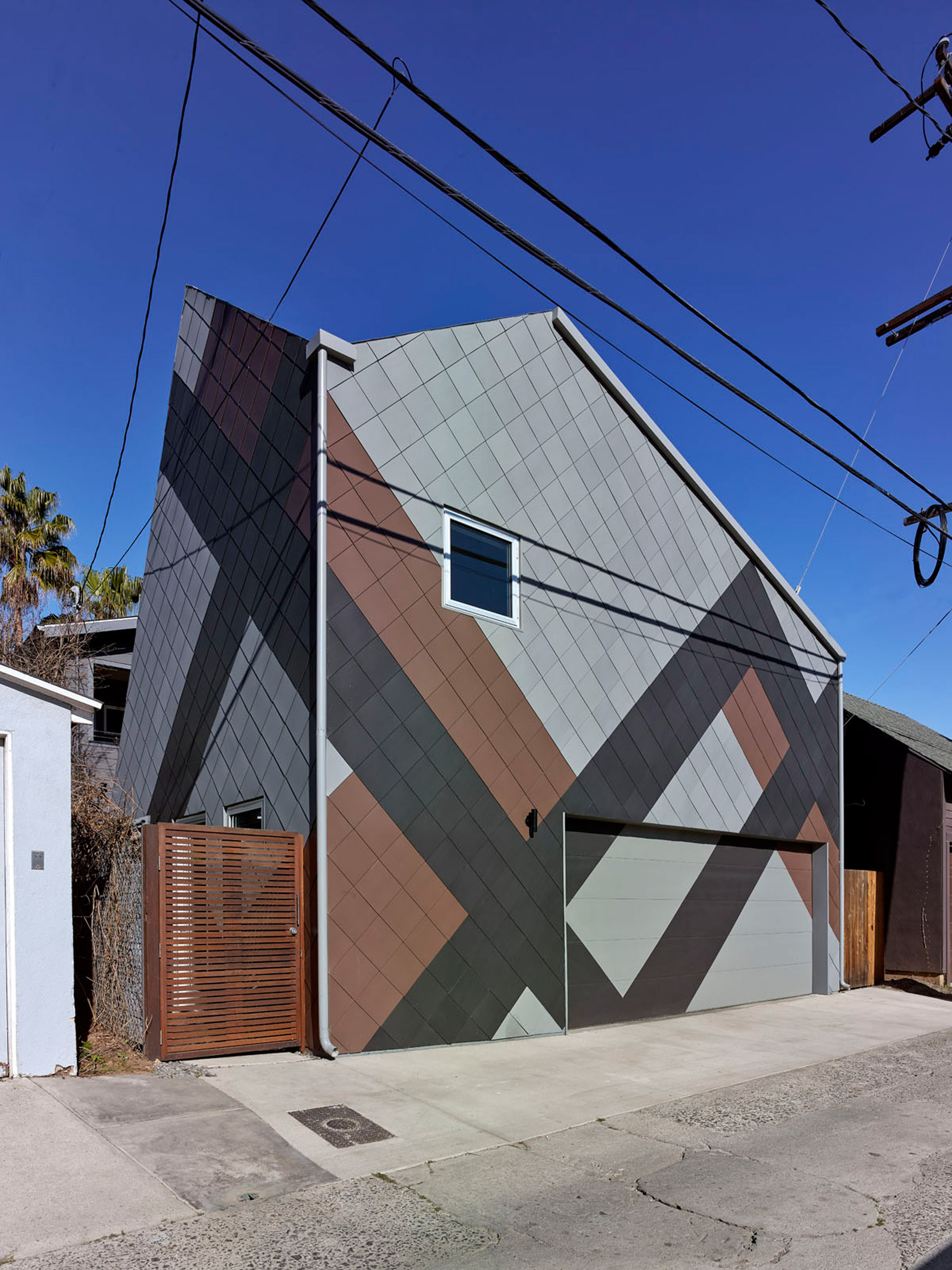 American firm Modal Design has created a studio building for a video art collector in California, which features an angular roof and multi-tonal zinc cladding.

The Amoroso Video Studio sits behind a Craftsman-style home in Venice Beach, a coastal city in the Los Angeles metro area. Situated next to an alley and a public parking lot, the studio building replaced an old garage overrun by termites.

The client, an executive in the entertainment industry, requested a building that would perform several functions. It needed to serve as a studio and guest house, as well as a space for storing her film and video art collection – which features work by emerging artists focused on gender and socio-political issues.

As a reference for the project, she cited the Serpentine Gallery‘s temporary summer pavilions in London.

“Her support of young and evolving talent began, in part, from her time living in London near the Serpentine Gallery,” said Modal Design, a firm founded in 2004 by architect Daniel Monti. “The client specifically cited the gallery and its temporary pavilions as moments of personal delight and intrigue.”

Rather than delivering a simple box, the architects conceived an angular building that plays off the rooflines of neighbouring homes. They wrapped the building in zinc shingles coloured light grey, dark grey and brown – mimicking the “dazzle camouflage” used to disguise ships during the second world war.

“Historically done to camouflage World War II warships, the studio’s three muted colours break up the scale of the building from the alley, adjacent parking lot, and nearby Venice Boulevard,” the firm said.

Over-sized glazing on the north side of the building provides views to the main house, while also bringing in soft natural light.

The utilitarian-style ground floor houses a garage, a laundry room and storage space. Leading to the upper story is a staircase that gently widens as it ascends, opening up the view and enhancing the entry experience.

The upper level contains a small bathroom and a lofty, white room for watching videos and hosting guests. “The monochromatic palette allows the client to project onto any surface, from floors to walls to ceiling,” the architects said.

The space is defined by oak floors, fibreboard walls and a faceted ceiling punctuated with pin lights. The high ceiling provides an airy feeling despite the room’s small size.

Books are displayed on an angular console made of natural wood, which also contains concealed storage space for projectors and other technical devices. “Its geometry follows the shape of the windows directly behind it, unifying the piece and the space,” said the firm.

A white partition – which separates the public space from the bathroom – contains a murphy bed, closet and speakers.

Other studio buildings in the US include a plywood-lined sewing studio in California by ArcHive and a cedar-clad “studio in the trees” in Massachusetts by Nick Waldman.