TRENDING NOW
Struggling To Manage Your Debt? Here Are Five Ways To Take Back Control | Dr. Hauschka Produktlieblinge | 10 Health Problems Associated With Fluorescent Lights | What’s the Best Way for Contractors to Dispose of Junk Material? | Silky Silky | Home Tour | Voluminous | BaBäm! Kleiderspenden für das SOS-Kinderdorf gesucht | Slouchy Stripes | Hippe Sieraden Voor Een Indian Summer | Isabel Marant | Home Essentials | Tank | Which Rooms Can Your Children Clean as Chores? | How You Can Change Up Your Bedroom To Make It Feel Brand New | Ceiling Mounted Lights vs Recessed Lights: The Complete Rundown | Why You’re Always Tired | Racerneck | Chic in the Heat | Sea Salt Stripes | #SummerStateOfMind | Cappuccino and Latte Tones | Small Adjustments to Make Your Home More Eco-Friendly | Summer Striped Knits | How to Become a Successful Property Developer | Five Essential Steps To Prepare For A Home Improvement Project | The benefits of installing a garden office | Black and Cappuccino | OUR LUXURY VILLA IN SICILY AND THE TOP PLACES WE VISITED | Why Pressure Washing is a Big No-No When It Comes to Roofs | Beyond Cashmere | Hoe Kan je Een Zomerse Sfeer Maken in de Tuin? | 7 Self-Care Tips for Teenagers | 3 Fashionable Men’s Shoe Styles for Summer 2021 | Black Layers | Matching Sets | Pieces to Complete A Minimalist Wardrobe | Pillow Talk | Zomer-ready met de Juiste Investeringen Voor de Tuin of Balkon | Meine top 5 Foundations | Caring For The Environment: 5 Simple Ways You Can Make Your Garden More Environmentally Friendly | nu-in | Sleep Comfort: Top 5 Sheet Materials Compared | Hoodie | Understanding the “Keto Lite” or “Lazy Keto” Diet | Spring Shoe Story | Kind Cotton | How to Wash Your Hair Sustainably | 10 Reasons Why Gardening Is Such a Rewarding Hobby | Nearly Naked Part 2 | Which Should I Pick—Polarized, Tinted, or Mirror Lenses? | How to steer your way to success in the times of change – Shakuntali Siberia advises | Sundays | Burgundy Basics | On Solid Ground: 7 Essential Principles for Building the Home of Your Dreams | Sweatpants | Black and Brown | How to Create the Ultimate Guest Room | Textural Black | Double Dose | From Concept to Execution: 5 Secrets to Designing the House of Your Dreams | Maintaining Concrete: Everything You Need to Know | cozy, chic and cashmere | The Spirit of Relaxation: 6 Indoor Design Tricks for Making the Most of Your Living Room | Accomplishment is a Virtue: 4 Alternative and Lesser-Known Performance Therapies Used by Athletes | Silk + Leather | Liquid Silk | Loungewear + Outerwear | How Much Should You Spend on a New Home? Find Out in 4 Simple Steps | Fresh French Trench | 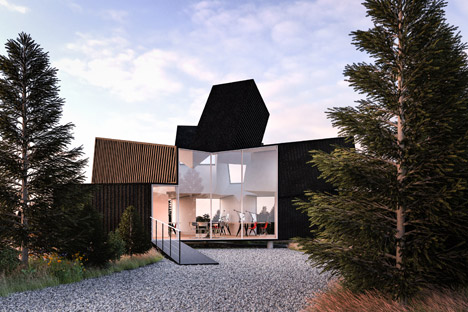 These renders by London architect James Whitaker depict a proposal for a low-cost studio space in Germany comprising a cluster of shipping containers, which are arranged to direct sunlight into the interior at different times of day (+ slideshow).

Whitaker developed the concept in 2010 while working as a photographer, after he was approached by an advertising agency interested in building a workspace in the Black Forest near the town of Hechingen.

The agency closed before the project could be realised but Whitaker recently created some detailed renderings to promote his studio’s move into digital imagery production.

The client had originally requested a design using shipping containers to reduce its cost, which formed the basis for the architect’s suggestion to cluster the metal boxes in a radial composition.

“The inspiration for the design came from crystal growths in a science laboratory and the eleventh-century castle that overlooks Hechingen,” Whitaker told Dezeen.

Related story: Grillagh Water House by Patrick Bradley is made up of four stacked shipping containers

Hohenzollern Castle, which was reconstructed in the 19th century by King Frederick William IV of Prussia, is positioned on top of a hill near the town and features an ornate arrangement of towers in the Gothic Revival style.

The verticality of the castle’s turrets is evoked in the steeply sloping forms of the containers, which would be directed to track the path of the sun as it travels across the sky.

Before the project was halted, Whitaker had sourced a supplier for the containers in Rotterdam and a metal fabricator in Hamburg that would adapt the structures so they could be bolted together on site. The bases of the cantilevered boxes would be fixed to the tops of the lower containers to anchor them and prevent them tipping forward.

Daylight would be funnelled through the complex roof design into a central meeting area, surrounded by workspaces accommodated within the spoked single-storey interior. The structure would be raised above the ground on concrete pillars.

The proposal was created for a rural site outside the town but Whitaker believes the design could be located anywhere. He added that he would like to work with a new client on developing the project further for a different site.

Whitaker also explained that his move into the world of computer-generated imagery has been informed by his experiences as a photographer and his understanding of how light, shadows and reflections alter the appearance of a building.

“In many ways visualisations and photography are very similar,” he said. “A good photograph should seduce the viewer and intrigue them to find out more; it should draw them in and trigger an emotion. Visualisations are just the same, and as such I approach them in the same way that I approach photographs.”

“With visualisations you can approach the image as you would a photo shoot in a studio,” the architect added, “manipulating the light and the materials to achieve exactly the moment you are seeking. The key then becomes bringing in that element of serendipity – making the image feel human and triggering an emotion.”