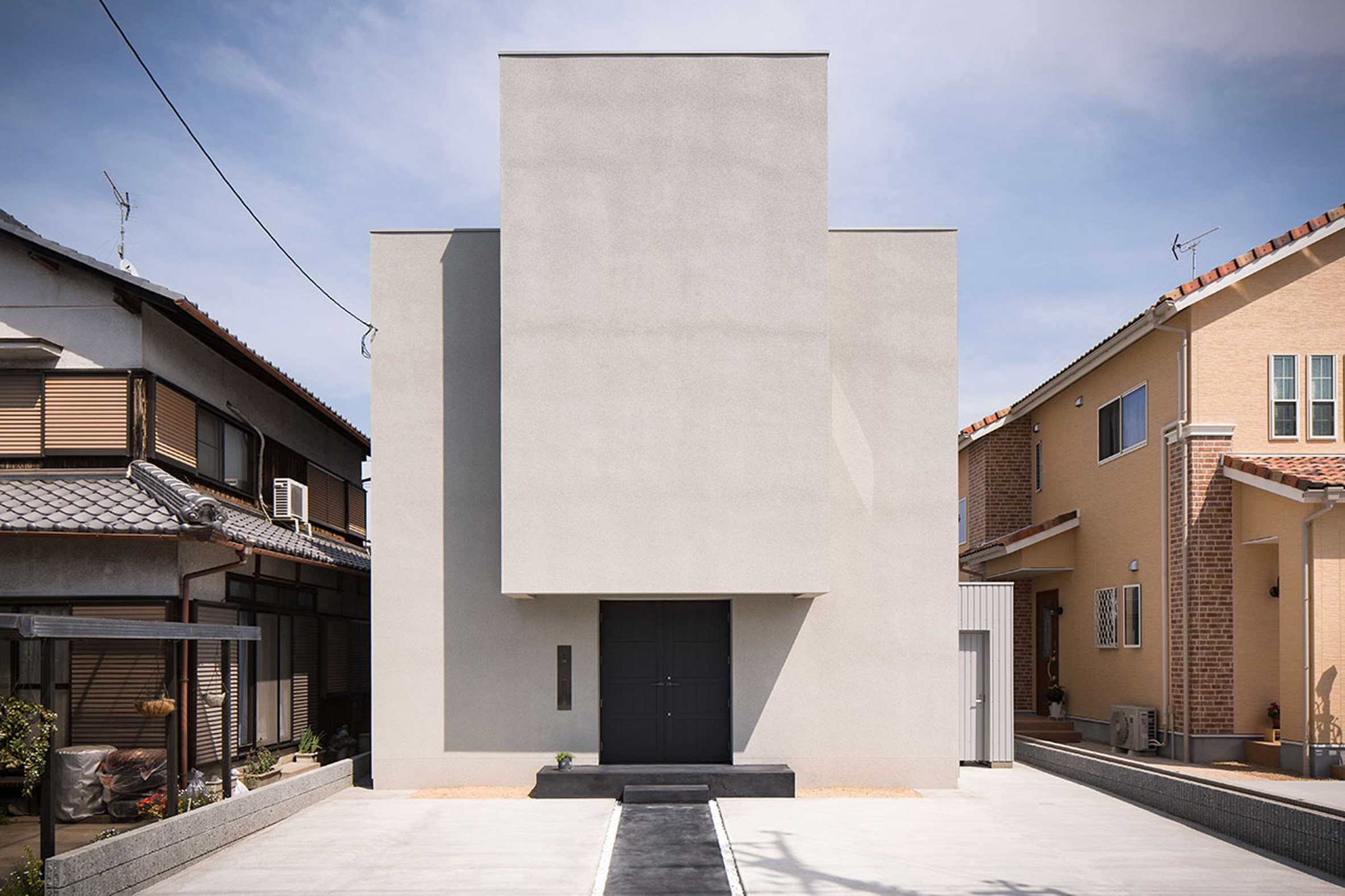 A chimney-like tower covered in white tiles rises in the courtyard of this house in Shiga, Japan, which architect Kouichi Kimura has designed for the owner to host yoga classes.

Located away from a busy main road, the two-storey residence combines a large block with a smaller one that appears to be slotted on top. There are no windows on the street-facing walls to offer plenty of privacy from passerbys. The only opening is the front door of the house, which provides a view straight through to the courtyard.

Kouichi Kimura of Japanese studio Form designed the ground floor of the 112-square-metre house as the primary space for the resident to teach the meditative practice of yoga. The living room and the L-shaped courtyard arranged around it are linked by pair of sliding glass doors. They can be opened fully to provide one space, or closed to create separate areas.

“Linkage between exterior and interior spaces were identified to realise a living space that expands toward outside in terms of visual and sensory aspects,” said Kimura. “The living room that also serves as the yoga classroom has two openings; it can be used as one unified space together with the courtyard when the sliding doors are wide opened.”

White stones surround the white-tiled platform of the courtyard, which extends to form a stepped tower that the architects describe as the symbol of the house. A pair of frosted glass panes are fitted where the tower meets the floor. Lights fitted underneath illuminate the space at night time.

“Light reflected by the basin and fresh wind stimulate the five senses, and set the mind and body free,” said the architect. “The frosted glass fitted in the sculptural-shaped form makes the light thrown into the room softer. It also serves as indirect illumination for the courtyard at night.”

A black fence surrounds the courtyard to offer further privacy and create a “semi-outdoor room”. There is also a tree planted in the corner, and a mortar counter and bench running along the narrow side is fitted with a sink and storage space, to act as a continuation of the lounge.

The architects placed the rest of the accommodation on the first first floor of the house. The open-plan kitchen and dining room occupies the centre with a large window to the outside and the tower feature.

A pair of children’s rooms are placed on either side, while the master bedroom is set to the rear. A simple material palette of dark wooden flooring and white-painted walls is used throughout.

Kouichi Kimura founded his Form in 1991 in the Kusatsu-City in Japan’s Shiga prefecture. The studio’s other projects in the area include a residence with contrasting materials and split levels and a live-work block with a steel-plated facade.

Photography is by Yoshihiro Asada.