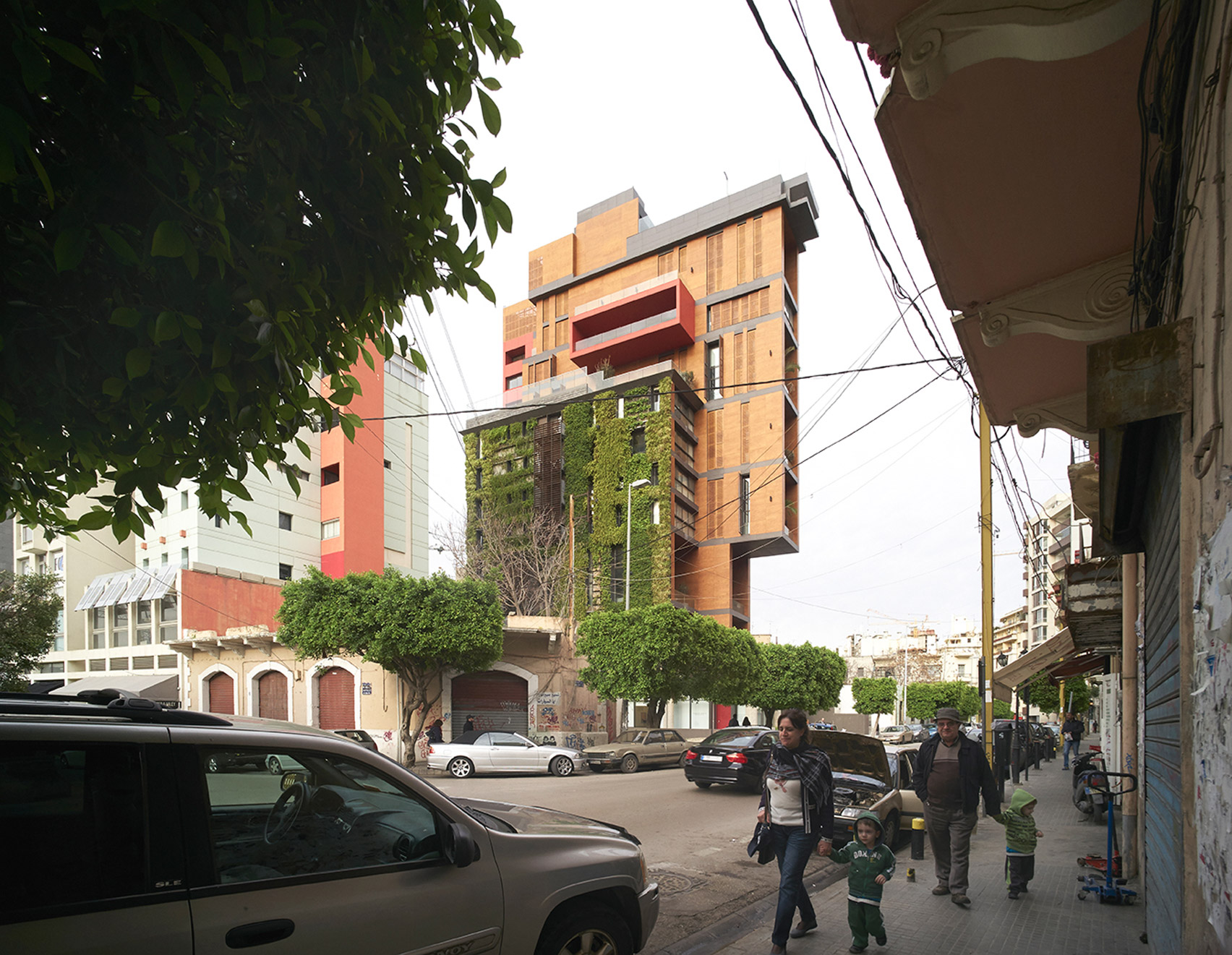 This apartment block and art gallery in Beirut combines traditional timber and stone cladding with a vertical garden and a bright-red balcony that cantilevers from one of its facades.

During the development process, Bonfils suggested that apartments could be added above the gallery, including 10 two-storey flats, a pair of penthouses and a single-floor home.

“The duplexes were designed as lofts because I thought that the theme of a contemporary art gallery would match with these kinds of units,” the architect told Dezeen.

Due to the restrictively narrow site in an area between the city centre and its eastern suburbs, the tower is arranged as a cluster of three parallel elongated blocks.

The staggered formation helps to ensure natural light is able to reach the various levels, while a cantilevered section that extends out towards the street emphasises the building’s partly public function.

Each section has a distinct character resulting from the various materials applied to the facades.

These details complement the diversity of the surrounding urban context and are revealed when the building is viewed from different angles.

The lower of the three blocks is clad with a verdant vertical garden that was influenced by a public garden located in the adjacent 1960s Electricite du Liban headquarters.

That garden is no longer accessible to the public, so Bonfils wanted to reintroduce a more space-efficient vertical green space that the community could enjoy.

“I took into account that the vertical garden of East Village would complete the public garden of the Electricite du Liban building,” said the architect, “and the fact that the location is offering the opportunity to designate a gateway to the city of Beirut.”

The building’s exterior is also informed by the materiality of traditional Lebanese architecture, which is expressed in the dark stone and wood cladding applied to the facades.

The wood, in particular, references the small houses that can still be found in the surrounding Mar Mikhael neighbourhood.

The bright-red metal used to clad a balcony that projects from one unit offers a modern contrast to the familiar materials applied to the majority of the exterior.

“East Village is a kind of suprematist composition playing with the paradoxical conditions of today and linking us to a kind of paradigm,” said Bonfils.

The red box contains a private bar that provides occupants with a panoramic view of the city and the bars of its downtown district.

Directly below, on the roof of the block fronted by the vertical garden, is an infinity pool which is lined with glazing so it too offers uninterrupted views of the skyline.

The Oasis of Aboukir green wall by Patrick Blanc

Photography is by Julien Lanoo.