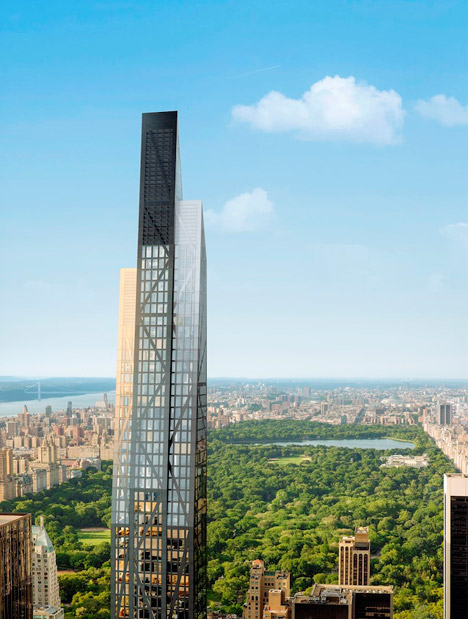 New images show details of the design for the 53W53 residential tower by French architect Jean Nouvel, which will occupy a site adjacent to the Museum of Modern Art on New York’s 53rd Street.

Featuring a tapered profile with a roofline staggered across three irregular levels, the 320-metre-tall skyscraper will house 139 apartments — including larger residences that take up entire floors and duplexes with private elevators.

The second, fourth and fifth floors of the 82-storey structure will be occupied by MoMA, which will create new public gallery spaces inside the building, known locally as the MoMA Tower.

The project forms part of a wider expansion plan by the museum that also includes the controversial demolition of the American Folk Art Museum by US architects Tod Williams and Billie Tsien.

Jean Nouvel‘s design features an exposed structural steel system that creates a zigzagging pattern of struts across the facade.

The shape of the building, which becomes increasingly narrow towards the top, means that each apartment has a different plan. The tilting facade has necessitated the design of special blind systems for the windows.

“53W53 will be one of the most architecturally significant skyscrapers ever built in New York City,” said David Penick, managing director at development company Hines, which is part of the development consortium building the project.

“53W53 also shares a special connection to the Museum of Modern Art, one of the most respected cultural institutions in the world,” he said.

Buyers of the homes inside the tower – ranging in price from $3 million (£1.9 million) to $70 million (£45.1 million) – will qualify for special membership at the museum, which houses one of America’s most influential collections of contemporary design.

Nouvel first began working on the tower in 2006, publishing designs in 2007, but construction was delayed by the financial crisis. Work finally started on site last year with an amended design, and is due to complete this autumn. The apartments will go on sale this week.

The interiors are by New York-based Thierry Despont, who will create an oak, marble and bronze lobby inspired by Nouvel’s structure.

Nouvel has also designed a “wellness centre” on the 12th floor, with a swimming pool, gym, squash court and “golf simulator”.