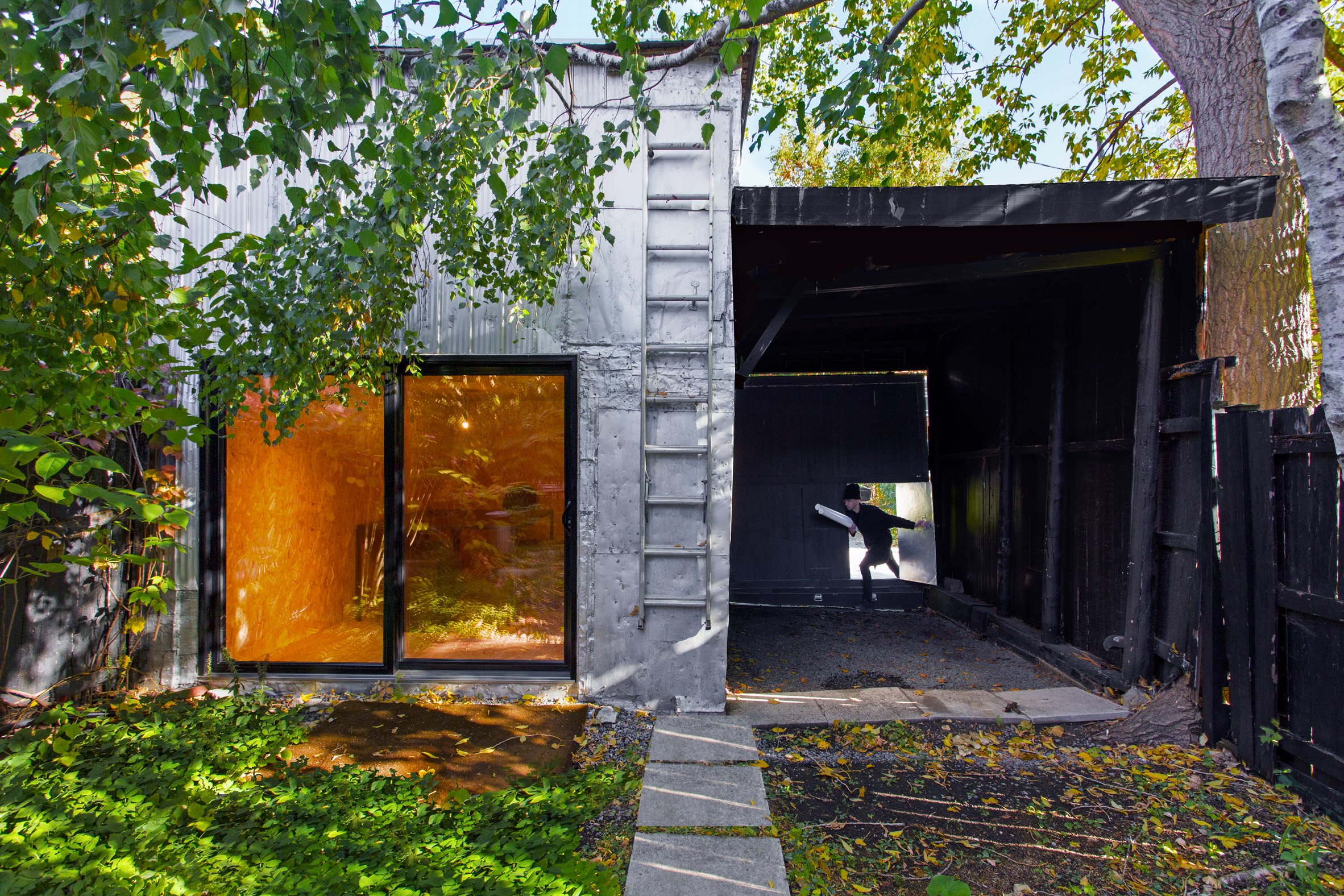 Canadian architect Jean Verville has overhauled a storage shed at his home into an austere workspace lined with oriented strand board.

The project, called IN 1, was envisioned as a “model on a human scale”. It is one in a series of recent works by Verville intended to embody the merging of art and architecture, through experimention with both space and imagery.

“Sensory perception is asked to transgress the physical limits of space to favour the illusory abstraction of dimensional form and produce architecture that seems free from their function and materiality,” said Verville, who runs an eponymous design studio in Montreal.

The project entailed the conversion of an existing, metal-wrapped shed at the rear of the architect’s property into a 14-square-metre studio. The exterior was left intact, while the interior was completely reimagined.

“Like a Russian doll, the model slips into the silver shed to offer an architectural experience yet hiding another one,” the architect said.

The interior is covered in oriented strand board (OSB), a type of engineered lumber made from pressurised wood chips.

“Through the kaleidoscopic texture of its compact pattern, a sole material eclipses the modular frame of the panels – like the irregularities of the old hangar walls,” the architect said.

Three distinct subspaces were created within the two-level shed.

The ground floor has a double-height area and a lower, more compact space. A set of black tables, cabinets and chairs can be reconfigured as needed.

The upper level, which is accessed via a drop-down stair, was envisioned as a suspended cabin with no identifiable doorway. Operable hatches can be opened up, enabling light to enter the elevated volume.

“The sculptural effect, of a disconcerting simplicity, reveals a complex lair that opposes the sharpness of its forms,” said the architect.

IN 1 is one of three “installations” by Verville. The others – called IN 2 and IN 3 – involved the creation of minimalist interiors for two different residences.

“These intimate portraits present universes transposing the personalities of their occupants, while illustrating their moving collaborations with the designer,” he said of the projects.

Verville began exploring the intersection of art and architecture after a series of research stays in Japan, where he focused on the Art House Project — a collection of abandoned structures in the small port town of Honmura that were converted into art installations.

Other projects by Verville include a white clapboard house in suburban Montreal, and a black cottage in rural Quebec with pointy roofs that “seems to emerge from a children’s story”.

Photography is by François Bodlet.