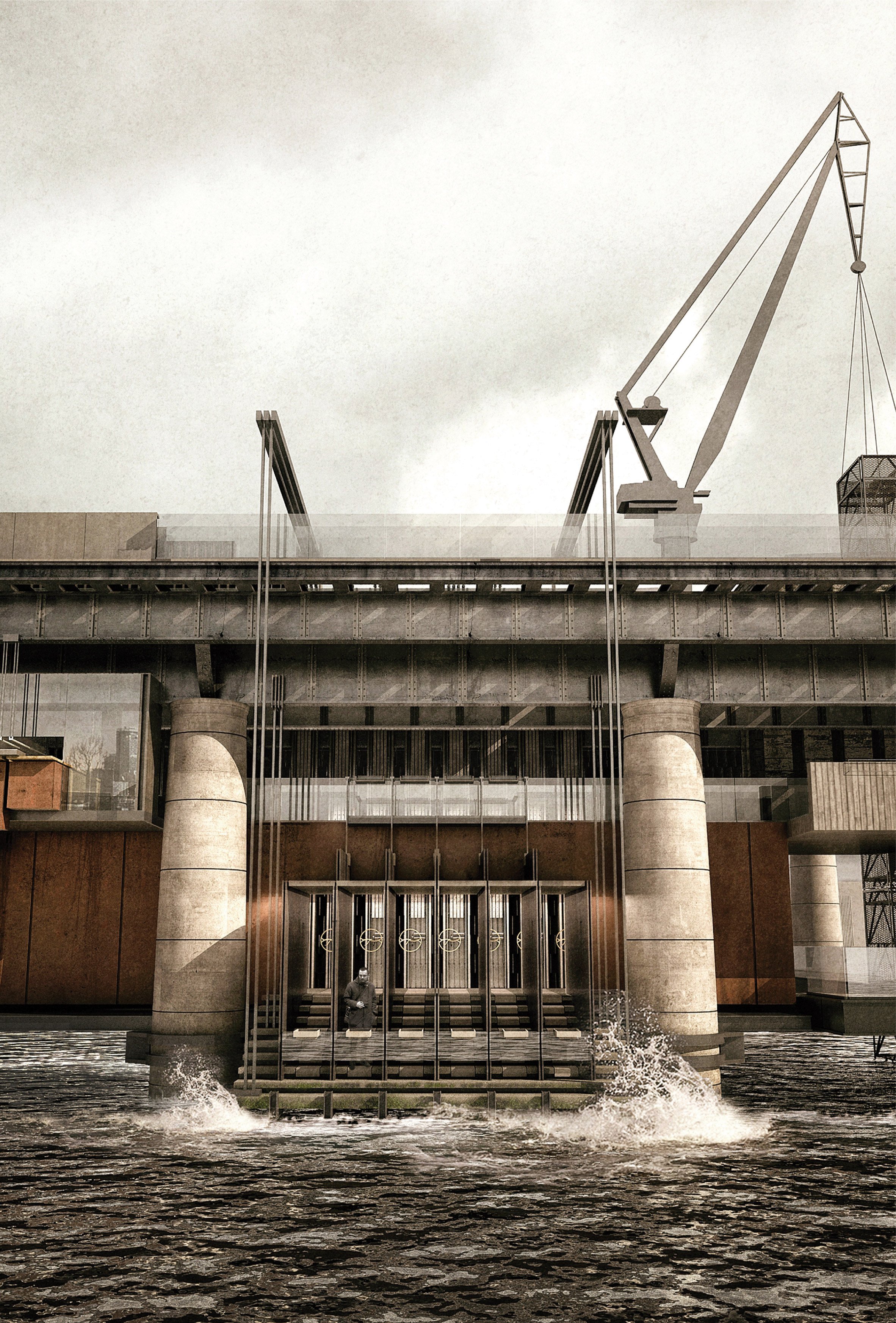 Royal College of Art graduate Jiaji Shen has proposed transforming a disused pier on London’s River Thames into a workshop for a designer who makes jewellery with items scavenged from the mud.

Shen developed The Jewel of the Thames project during his interior design masters studies at London’s Royal College of Art. It formed part of the programme’s Obsolescence section, which asked students to draw up proposals for the reuse of abandoned buildings and structures.

Shen’s proposal focuses on a derelict pier in Greenwich, southeast London, which was formerly used to transfer coal from ships on the river to the adjacent power station. The proposal sees the metal infrastructure converted to include a workshop, studio and gallery for a “mudlarking” jewellery designer who sources their materials directly from the river below.

The term refers to the 18th-century occupation of those who scavenged river banks for valuable, disgarded materials that they could sell on. Shen’s project references the similar modern-day activity, which re-uses historical debris like old coins, clay pipes, ceramic bottle tops, pieces of Roman pottery and ancient rusty nails found in the mud.

“Jiaji Shen’s project imagines a building that will provide a ‘mudlarking’ jewellery designer and maker with the facilities they would need to gather raw materials from the river bank and transform them into sophisticated jewellery items that can designed, crafted, exhibited and sold on site,” explained Shen’s tutor, Ian Higgins.

Shen’s intervention is designed to slot underneath the existing jetty, between the sixteen large cast-iron columns, which are cross-braced, and topped with the loading bay. Renderings show the structure held above the water by suspension cranes that loop overhead.

“The skeletal structure was originally designed to work in harmony with the ever changing levels of the tidal river and the proposal weaves a new building into the existing metal framework,” said Higgins. “The new structure is suspended from the old and ‘floats’ above the river.”

Shen’s renderings show a crane-mounted lift at the rear of the building providing direct access to the river bank for the jeweller to source materials when the water is out. The crane appears to pull the lift up to the higher workshop and studio levels.

Other features include a set of steps that lead down to match the height of the water when it comes in, while large windows and openings offer views across the river from the series of workshops and studios.

Walkways with glass balustrades provide links between the different spaces, leading past a double-height wall where small found items are displayed on hooks. Storage units are shown making up the rear wall of the space.

Shen‘s project was exhibited at the RCA’s School of Architecture’s graduate show, which ran from 24 June to 2 July at an old fire station in Lambeth – the first time the end-of-year show has taken place outside of the school’s campus.

Other graduate projects from the school include a series of low-cost cantilevered homes to combat housing crisis developed by Llywelyn James.

While Bartlett School of Architecture graduate Grace Quah produced a feminist film featuring a conceptual housing estate where appliances become the architecture to reduce the amount of unpaid domestic labour women are required to carry out.